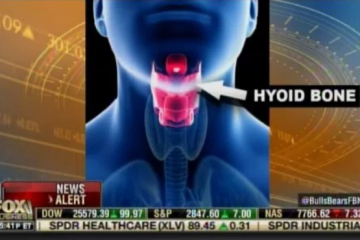 We all knew it was coming and Friday, the New York Medical Examiner’s office ruled that Jeffrey Epstein’s death was a suicide, but that is not how a Maryland office ruled the death of inmate Ronnie L. White.  In 2008, White had the same fracture of the hyoid bone that is claimed of Epstein, but his death was ruled a homicide.  Forensic Pathologist Dr. Cyril Wecht appeared on FOX Business Network and addressed the findings of the autopsy report that had been put out to the media.

Dr. Wecht is not only a doctor but an attorney, as well.

In his appearance, Dr. Wecht referenced a Montreal study that indicated that only 2 out of 239 hanging deaths demonstrated that the hyoid bone was broken, something that the Medical Examiner claims occurred to Epstein.

As we reported earlier, the breaking of the hyoid bone is normally due to strangulation, not hanging.  Yet, a man who has vast knowledge of elite people around the world involved in human trafficking and sex slavery of children, somehow meets and untimely, but clearly expected, death in prison and is one of those one percent, by simply tying a sheet around his neck and “kneeling” on the floor?  Come on.

No one is buying that.  No one.

According to the Gateway Pundit, “Dr. Mark Siegel told Bulls and Bears on FOX Business Network that the hyoid bone might break in strangulation about one-third to one-half of the time. In suicide, hanging, it might break 6-10% of the time.”

However, in homicides, that bone breaks a whopping 50% of the time!

“It certainly increased the chances that this was a murder than a suicide,” said Siegel with reference to the findings that the hyoid bone was broken.  “Let me tell you why. The hyoid bone which is right here in the neck, a U-shaped bone… In his case the autopsy is now revealing that multiple bones were broken in his neck including the hyoid. The hyoid bone might break in strangulation about one-third to one-half of the time.”

“In suicide, hanging, it might break 6-10% of the time, depending on which study you look at… Much less percentage,” Sr. Siegel added.  “But in order to break that bone and multiple bones in the neck, David, you’ have to exert a lot of force if it’s a hanging. I don’t want to get too graphic here but he supposedly hung himself off a bunk bed with sheets. I’m thinking more a rope with a height.”

So, we’re up to maybe 10% of the time.  However, the question I have is that with a hanging that involved a significant drop with a sudden stop or just some guy leaning on a sheet wrapped around his neck tied to his top bunk?

After all, we’ve gotten several indications from inmates and former inmates that there was no way Epstein hanged himself in the Manhattan Correction Center and that he was even switched out.

I mentioned Ronnie L. White at the beginning of this piece.

In 2008, Ronnie L. White, a teenager accused of killing a police officer, died of an apparent suicide in a suburban Washington jail cell. But two days later, the cause of death was changed to homicide when a Maryland state medical examiner discoveredthe teen had a broken hyoid.

Keep in mind this was only one of the bones broken in Epstein’s neck.

All of this, along with the multiple screws ups of the MCC involving cameras, the removal of Epstein from suicide watch, guards allegedly falling asleep and all of these things coming together in a moment in time to allow for him to commit suicide are all highly questionable.

However, it is still my belief that we are not going to get the truth:  not from MCC, the media or even the Trump administration.  We just aren’t and if we do, I’ll be the first to admit I was wrong.  I just don’t think I am and all of this quietens a lot concerning justice.

The one thing I will say is that this was so obvious and so blatant that it’s just causing this to blow up and become an ever-increasingly prominent story rather than relegating it to the back pages, if media even care to report the facts at all.