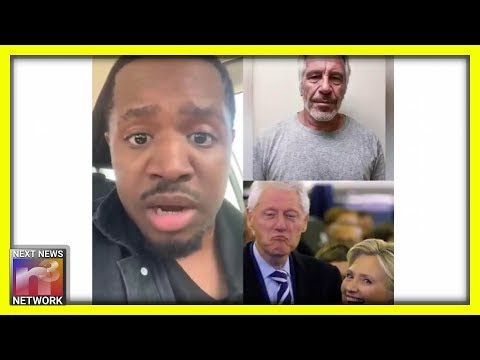 Terrence Williams had the honor of being retweeted by The President last week.

84,000 people made #ClintonBodyCount trend on Twitter after Epstein’s death.

Last week, following the bombshell news that billionaire Jeffrey Epstein, who frequently traveled with accused sexual predator Bill Clinton, was found dead in his jail cell of an apparent suicide, #ClintonBodyCount began trending on Twitter. There’s been a lot of speculation that the former president, Bill Clinton’s name would be revealed in the court documents  as someone who accompanied Epstein to “Pedophile Island.”

Bill Clinton claims he was never on Jeffrey Epstein’s island, but many believe he’s not telling the truth.

Conservative comedian Terrence K. Williams, who is known for his hilarious videos, mocking Democrats, while calling out the left for their lies and hypocrisy, predicted on July 25, that Jeffrey Epstein would die. He warned about how “people end up dead & die of Suicide when they have information on the Clintons.

On my Tweet from 7/25/19 I PREDICTED Jeffery Epstein would die! I said it’s crazy how people end up dead & die of Suicide when they have information on The Clintons.#JeffreyEpsteinDead #EpsteinSuicide #EpsteinMurder #ClintonBodyCount https://t.co/vVkdRIkA0a

I actually covered the original tweet and story earlier in the week.

Terrence Williams got a retweet from the President on Saturday as #ClintonBodyCount trended on Twitter, following news of Jeffrey Epstein’s bizarre suicide.

The powers that be at Twitter decided that they did not want #ClintonBodyCount to trend and called forth their vast army of bots to try to get #TrumpBodyCount to take its place.

ABC 7 says he died by SUICIDE!

The 66-year-old financier was hospitalized in July after he was found unresponsive in what appeared to be a possible suicide attempt.

In July Epstein was found injured and in a fetal position inside his cell at a New York City jail.

He was reportedly put under suicide watch.

On Saturday he reportedly hanged himself.

By noon the #ClintonBodyCount hashtag had over 84,000 mentions.

It was too damaging to the Clintons and Democrat Party.

Trump Body Count… That makes no sense — was still up despite having less than a third number of mentions as the Clinton hashtag.

Several TGP readers are telling us the #ClintonBodyCount hashtag was deleted from the trending list this afternoon.

Trump can release his social media executive order at any time now.

Here are some other 2019 inductees into the Clinton Body Count club:

Just because the Clintons are out of elected office, it does not mean they are out of business.

If they kill everyone they know, they will be in the clear.

They can’t kill them all in one day, however, so stay tuned and remain patient.

Why would the Clintons want to kill Jeffrey Epstein? I don’t know but here are some ideas:

They should have listened to Ann Coulter:

Epstein was a bad man who probably deserved any horrible fate that might have come his way.

What remains to be seen is if any justice at all comes to the victims of his horrendous criminal enterprise.

Conservatives continue to try to break through on Facebook and Twitter but it seems to be an impossible task UNLESS and UNTIL the social media giants are somehow reigned back in by the government.

Not only is that doubtful, I am not even sure it is constitutional.

Conservatives keep calling for and waiting for something to roughly replicate and ultimately replace the social media giants.

But giants are hard to replicate and replace.