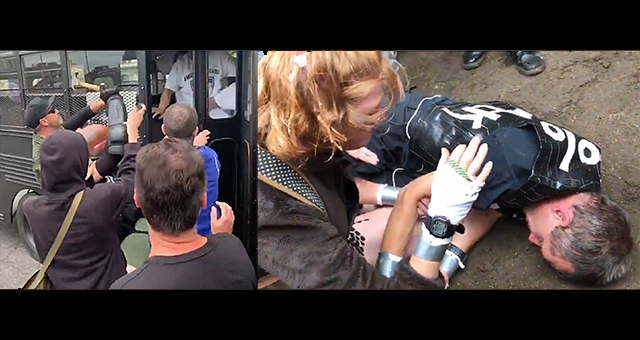 Antifa rioters in Portland on Saturday violently attacked right-wing rallygoers with hammers, beat a man unconscious, attacked people with weapons in the streets and sprayed multiple people with pepper-spray and mace.

Antifa attacks people on a bus. They try to pull them out and hit them with a hammer. #PortlandProtests pic.twitter.com/JSkCE1Vrcy

More anarchy and chaos in Portland by antifa. pic.twitter.com/WHr8VQWzhP

A large antifa mob chase & attack a man & a young girl who got separated from the others. No police. #PortlandProtests pic.twitter.com/erceCRVnad

Middle-age man was maced and beaten by an antifa mob. He was knocked unconscious to the ground. His partner or spouse was trying to protect him as mob still surrounded them. No police. #PortlandProtests pic.twitter.com/eAhrMSEKU1

The antifa mob finds and chases down a man (in the blue hat). They had moments earlier sprayed him in the face. He attempted to walk away but they follow him. pic.twitter.com/EMJdTjbLny

No police in sight as antifa mob descends on men. A fight involving weapons breaks out. Video courtesy of @TPostMillennial. #PortlandProtests pic.twitter.com/ddbHB7gwCx

Photo of one of the men on the black bus after he was beaten, maced and had a hammer thrown at his torso during the antifa attack. pic.twitter.com/XPK4z8IbgJ

“No Trump! No KKK!” a man shouts when he sees a small group of people carrying US flags. In the background, a group of antifa black block has amassed. pic.twitter.com/3PQGSk8Kw3

.@dcexaminer reporter @Julio_Rosas11 is confronted for wearing a shirt with an American flag on the sleeve. A protester is extremely offended. pic.twitter.com/8KCkjjE3ix

Independent journalist @Muffinpan503 was attacked & pepper sprayed. A woman tries to calm the angry shirtless man following him but is told to mind her own business as a white person. pic.twitter.com/SeQb2A2gTX

A black man praises Jesus on a bullhorn. The shirtless protester yells at him: “Ain’t no f—ing white Jesus going to save the black man from the white man’s oppression, uncle Tom.” pic.twitter.com/CRMuxFF41p

This man was just taken down and arrested. According to @TPostMillennial, he may have had a gun. #PortlandProtest
pic.twitter.com/hZUgrpmxKY

Skirmish happens as man tries to take weapon from someone. #PortlandProtests pic.twitter.com/c1kkGuekR8

The police decided to stop protecting that small conservative group that got separated & antifa went after them. Man holding flag got a bunch of stuff thrown on his head. Not sure why @PortlandPolice left. Mob is following them. pic.twitter.com/bTlAUsUpbr

The aggressive antifa shirtless man who was threatening people was arrested by police. This angered the mob who said this was police bias. #PortlandProtests pic.twitter.com/OYDsyLw3EY

Local propaganda outlet The Oregonian described the event as “tense but relatively uneventful.”

A confluence of protesters on opposite ends of the ideological spectrum merged on Portland’s waterfront Saturday in a tense but relatively uneventful face-off that brought #PortlandProtest national attention. https://t.co/c1cS84HOWl pic.twitter.com/OXitINUKJL

President Trump said before the event that he would monitor the situation:

Major consideration is being given to naming ANTIFA an “ORGANIZATION OF TERROR.” Portland is being watched very closely. Hopefully the Mayor will be able to properly do his job!