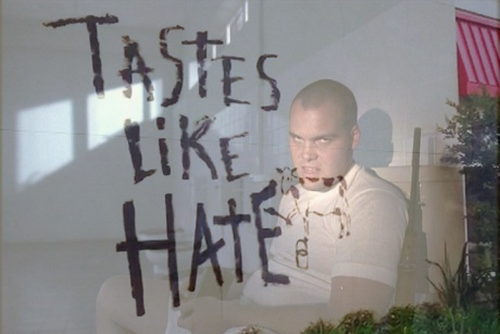 USA Today is a liberal rag that supports liberal causes.

However, one thing we realize about the left is that they have a hard and fast rule:

When the S Hits The F, all you can do is EAT YOUR OWN.

Still, I was a bit shocked to see USA Today turn on the Southern Poverty Law Center, but that’s exactly what they did in publishing an op-ed from one of Floyd Corkins intended victims.

First here is a refresher on the story of a guy who wanted to kill as many people as he could and cover their dead faces with Chick-fil-A sandwiches.

From CNN, “After years of thinking it over, Floyd Corkins finally had a plan.

He’d bought a gun and learned how to use it. He’d loaded three magazines. And he had stopped by Chick-fil-A to pick up 15 sandwiches, which he planned to smear in the dying faces of staffers he expected to kill at the Family Research Council in Washington.”

Floyd Lee Corkins was a homosexual who was mad at the world.

I guess Chick-fil-A seemed a natural fit for the statement he was trying to make.

During his FBI interview, Corkins was asked how he chose his target. His response was “Southern Poverty Law lists anti-gay groups. I found them online”. (source)

Now before we get into the Op-ed from USA Today, I want everyone to remember that the SPLC was embroiled in scandal earlier in 2019 and is still trying to recover.

When scandal happens, liberals tend to pile on to save and distance themselves.

So, in my opinion, that is exactly what USA Today is doing.

I’ll never forget the moment I learned we were on lockdown. It was Aug.15, 2012. My frustration mingled with fear. Trapped on the sixth floor, we knew someone had been shot. We knew we couldn’t leave yet. We knew little else.

While I was missing lunch, a crime scene played out in the office lobby below me. My coworker and friend Leo wasn’t armed, but he’d played the quick-thinking and inadvertent hero, disarming a young man on a mission to kill me and as many of my colleagues as possible. The gunman had packed his backpack with ammo and 15 Chick-fil-A sandwiches — later admitting that he’d planned to smear them on our lifeless faces as a political statement. Leo took a bullet in the arm but managed to disarm and hold the attacker until law enforcement arrived.

I wrote and edited for the Family Research Council, a public advocacy organization that promoted the principles I’d cared about since childhood: protecting the family, promoting the dignity of every human life and advocating for religious liberty. It reads like a tagline, but it’s also just what I believed and the way I chose to match my career with my convictions.

I never expected that everyone would celebrate or share my beliefs. But I did expect to be able to discuss and debate these differences without becoming a political target in an act of terrorism, the first conviction under Washington, D.C.’s 2002 Anti-Terrorism Act.

The Southern Poverty Law Center labeled us a “hate group”

It was the type of violent incident that one could expect a group that purportedly monitors “hate,” like the Southern Poverty Law Center, to notice, research, and decry. In fact, we were on the center’s radar but for all the wrong reasons. The assailant acknowledged later in FBI testimony that he had selected our office precisely because the SPLC had labeled my employer a “hate group.”

It’s always been easier to smear people rather than wrestle with their ideas. It’s a bully who calls names and spreads lies rather than thoroughly reading a brief’s legal arguments or challenging the rationale underlying a policy proposal. The SPLC has chosen to take the easy path — to intimidate and mislead for raw political power and financial benefit.

For years, former employees revealed, local journalists reported and commentators have lamented: the Southern Poverty Law Center is not what it claims to be. Not a pure-hearted, clear-headed legal advocate for the vulnerable, but rather an obscenely wealthy marketing scheme. For years, the left-wing interest group has used its “hate group” list to promote the fiction that violent Neo-Nazis and Christian nonprofits peacefully promoting orthodox beliefs about marriage and sex are indistinguishable. Sometimes, it’s apologized to public figures; it’s smeared and recently paid out millions to settle a threatened defamation lawsuit.

Read the rest at USA Today…

It does my heart good to see the SPLC unravel before my eyes, because the organization that was responsible for picking “hate groups” and nearly causing Jessica Prol Smith (author of the above) to lose her life was never more than a hate group itself.

It’s good to see a lotmost of SPLC’s open platform to hate conservatism is dead, or at least near death.

Good for USA Today for kicking them while they are down.

Stay down SPLC, no one wants your hate-spewing machine to recover.

Someone else will spring up and take your place soon enough, anyway.