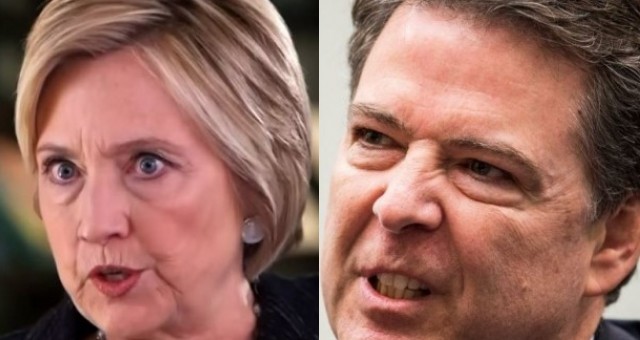 With respect to potential computer intrusion by hostile actors, we did not find direct evidence that Secretary Clinton’s personal e-mail domain, in its various configurations since 2009, was successfully hacked. But, given the nature of the system and of the actors potentially involved, we assess that we would be unlikely to see such direct evidence.

The unlikelihood of seeing such evidence increased exponentially when Comey punted on seizing the server and sending it the FBI’s cyber forensic labs for examination,

We do assess that hostile actors gained access to the private commercial e-mail accounts of people with whom Secretary Clinton was in regular contact from her personal account.

This admission only makes Comey’s decision to allow Clinton’s lawyers to cull through the emails, many of them classified, to determine what FBI investigators would be able to see worse.

We also assess that Secretary Clinton’s use of a personal e-mail domain was both known by a large number of people and readily apparent. She also used her personal e-mail extensively while outside the United States, including sending and receiving work-related e-mails in the territory of sophisticated adversaries.

Given that combination of factors, we assess it is possible that hostile actors gained access to Secretary Clinton’s personal e-mail account.

Possible?  That sounded incredible when Comey made that statement on July 5, 2016.  It was a virtual certainty and the FBI, under James Comey made no attempt to determine the extent of the damage to national security.

Now sources have confirmed to investigative reporter Richard Pollack of the Daily Caller, that China had indeed inserted a code that forwarded copies of the Secretary of State’s emails to a Chinese company in real time.

(The Daily Caller) A Chinese-owned company operating in the Washington, D.C., area hacked Hillary Clinton’s private server throughout her term as secretary of state and obtained nearly all her emails, two sources briefed on the matter told The Daily Caller News Foundation.

The Chinese firm obtained Clinton’s emails in real time as she sent and received communications and documents through her personal server, according to the sources, who said the hacking was conducted as part of an intelligence operation.

“IC IG was involved in the classification review of certain information drawn from the private email server,” an agency spokeswoman told TheDCNF. She declined to comment further.

The two IGs asked the Department of Justice to investigate whether the classified information was compromised, according to a July 23, 2015, New York Times report based on unnamed senior government officials.

The FBI issued a referral to the Justice Department in July 2015. The bureau warned that classified information may have been disclosed to a foreign power or to one of its agents.

Yet Comey’s FBI was more focused on protecting what might’ve been the most corrupt presidential candidate in U.S. history than on protecting national security.

This information has been widely known in intelligence circles and by congress for some time and yet the mainstream media ignored it, focusing Americans’ attention on a phony collusion story between Trump and Russia, instead.

One question… inquiring minds want to know; was Hillary complicit with the ChiComs and not simply an unwitting dupe?

It’s not as though U.S. policy during her reign as Secretary of State did anything to stop the Communist Chinese from exfiltrating half-a-trillion-dollars annually from the U.S., relocating our jobs and manufacturing to the communists, the forced transfer of technology from American companies, the theft of intellectual property of U.S. designers, inventors, etc., or the infiltration of U.S. infrastructure by Huawei.

I’m guessing that Huawei is the unnamed company that penetrated Clinton’s private server.

Remember, she sold Uranium to the Russians for her own enrichment.  There’s evidence she’d sell U.S. assets for enough money.

The Clintons said they left the White House penniless and they’re now estimated to be worth more than $100 million.  That’s a lot of money for four years of work at the State Department and a few speeches.

And recall the reports about the hissy fit she threw following the Commander-in-Chief “debate” after NBC’s Matt Lauer asked her about the possibility of an impartial investigation into the full contents of her emails:

“If that f—ing bastard wins, we all hang from nooses.  Lauer’s finished. And, if I lose it’s all on your heads for screwing this up.”

Corrupt as all hell…