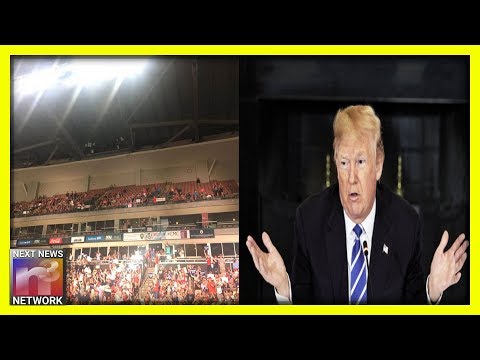 No Democrat Presidential candidate draws people like President Trump and it’s not even close.

So what do you do when people line up for miles to see Trump speak?

If you are a Democrat you find a way to lock them out.

What a bizarre story.

Here is Next News Network with the latest:

So they locked thousands of people out and the people in New Hampshire simply showed their support outside the arena.

Thousands of Trump supporters were locked out of the SNHU Arena in Manchester, New Hampshire for Thursday’s reelection campaign rally by President Trump even though there were plenty of empty seats in the upper deck of the arena–and even a dozen empty seats were seen in the lower bowl in the corner behind Trump as he spoke to the near capacity crowd. A rally attendee said he “watched authorities force away thousands of people trying to get into the SNHU, that waited in line for hours.” Photos taken from inside and outside the 11,000 capacity arena show thousands outside watching the rally on a large outdoor TV while several hundred seats were seen to be empty inside.

There is nothing like a Trump Rally! So much energy and so many dedicated supporters! The doors closed and thousands stayed to watch outside. #KAG #nhpolitics pic.twitter.com/oeBdjYDx29

People outside the Trump rally that couldn’t get in pic.twitter.com/IpmU2Ss2Mw

Think back to the 4th of July my friends.

The media was predicting small crowds to see President Trump and some even gave built-in excuses, like the weather.

So now it seems as though they might be locking people out to get the desired effect.

Do you think that will work?

I don’t think the Democrats are going to win New Hampshire.

This is going to sound incredibly bizarre to some, but they might be lucky to win California in 2020.

Considering one of those 2 Dems is Kamala Harris, that news is YUUUUGE.

If Harris does not win the nomination, Trump could quite possibly take California.

They seriously want Americans to believe that?

Americans are not stupid and Trump supporters are loyal.

That’s OK, we will show our support from outside the arena.