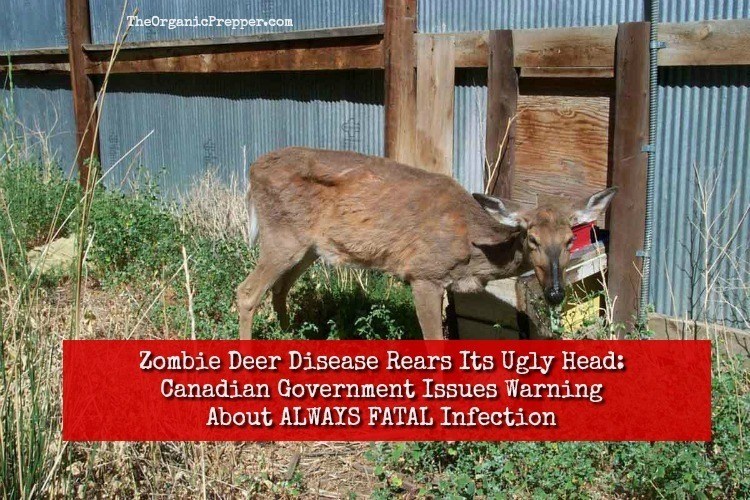 Earlier this year, an infectious disease expert warned that a deadly disease found in deer could infect humans in the near future.

Often referred to as “zombie deer” disease because of the symptoms, Chronic Wasting Disease (CWD) has been reported in at least 26 states in the continental United States and in four provinces in Canada. In addition, CWD has been reported in reindeer and/or moose in Norway, Finland, and Sweden, and a small number of imported cases have been reported in South Korea. The disease has also been found in farmed deer and elk.

CWD was recently detected in a herd of deer in Canada.

On July 26, the Canadian Food Inspection Agency (CFIA) confirmed a case of CWD in a herd of white-tailed deer, reports Global News:

While the chronic wasting disease (CWD) outbreak was contained — and no infected meat entered the Canadian food supply — experts say more needs to be done to stop the infectious disease from spreading.

The herd was “humanely destroyed on site and did not enter the food chain,” the agency told Global News in a statement. “[The farm] remains under quarantine and disease response activities have been initiated.”

This is the third case of CWD in Canada for 2019. The two other infections were also identified in Alberta — on Feb. 28 in elk and on June 21 in white-tailed deer. (source)

Before we discuss why this news is important, let’s back up a bit and talk about what CWD is and how it may eventually impact the food supply.

CWD is a transmissible spongiform encephalopathy disease found in deer, elk, moose, reindeer, and caribou. It is a progressive disease that is always fatal.

The disease is believed to be caused by abnormal proteins called prions, which are thought to cause damage to other normal prion proteins that can be found in tissues throughout the body. They are most often found in the brain and spinal cord, leading to brain damage and development of prion diseases. Infected brain cells eventually burst, leaving behind microscopic empty spaces in the brain matter that give it a “spongy” look.

Prions are misfolded proteins that are somehow infectious (we’re still not really sure how or why) and for which we have no treatments or cures. If you were to catch one, you’d basically deteriorate over the course of several months, possibly losing the ability to speak or move, and eventually you would die. Doctors wouldn’t be able to do anything to save you. (source)

The disease is believed to spread through saliva, urine, or feces from live deer or through contact with high-risk parts such as the backbone, eyes, or spleen of harvested deer. The disease can spread through the natural movement of deer but it spreads farther and quicker when humans move the deer.

Symptoms develop slowly – sometimes taking years to appear – and include stumbling, lack of coordination, drooling, lack of fear of people, and aggression.

Can CWD be transmitted to humans?

While there is no direct scientific evidence to suggest that CWD can be transmitted to humans, the CFIA says the consumption of meat from contaminated animals should be avoided.

However, some experts say CWD is a concern because the disease is adapting and may become a serious threat:

Darrel Rowledge, the director of Alliance for Public Wildlife, said CWD shouldn’t be discounted as an animal-only problem.

Rowledge said that while it’s difficult for a disease to jump from one species to another, signs the disease is evolving are alarming.

“We think about 70 percent of our diseases have come to us from other animals.” (source)

Rowledge’s warning echoes that of another expert. Earlier this year, Michael Osterholm, director of the Center for Infectious Disease Research and Policy at the University of Minnesota, told lawmakers that CWD should be treated as a public health issue. Osterholm (who sat on a panel of experts tracking the emergence of mad cow disease, or BSE, decades ago) issued this warning during a hearing:

“It is my best professional judgment based on my public health experience and the risk of BSE transmission to humans in the 1980s and 1990s and my extensive review and evaluation of laboratory research studies … that it is probable that human cases of CWD associated with the consumption of contaminated meat will be documented in the years ahead. It is possible that number of human cases will be substantial and will not be isolated events.” (source)

While he is aware that skeptics will accuse him of fear-mongering, Osterholm said, “If Stephen King could write an infectious disease novel, he would write about prions like this.”

There is a very similar disease that has already killed people.

As we reported earlier this year, Osterholm noted that for years, many public health and beef industry experts did not believe a similar disease – bovine spongiform encephalopathy (BSE, also known as “mad cow disease” – could infect people:

In 1996, researchers found strong evidence that BSE can infect humans as a variant known as Creutzfeldt-Jakob disease (vCJD).

Since 1996, more than 230 vCJD cases have been identified in 12 countries, 178 of them in the United Kingdom, 27 in France, and four in the United States. Just last fall, a case of mad cow disease was confirmed in Scotland, reports Food Safety News.

Also important to note: Hunters in Kentucky contracted a version of spongiform encephalopathy from squirrels in the 1990s. (source)

CJD has killed several people. Some of the victims consumed venison – and their cases progressed rapidly. To read about those cases, please see Can “Zombie Deer” Disease Kill Humans? Research Suggests It ALREADY HAS.

Rowledge is one of 30 experts from across North America who sent a letter to the Canadian federal government in June, urging the prime minister to “mandate, fund and undertake” a number of “emergency directives” to contain the disease, prevent human exposure and expand its surveillance program of prion diseases, Global News reports:

The letter — signed by scientists, hunting groups and Indigenous advocates — labeled the spread of CWD an epidemic.

“While no human cases of CWD have been confirmed, scientists note that while low, the risk is not zero — and it is evolving,” the letter reads.

“Thousands of CWD-infected animals are being consumed by hunters and their families across North America every year. Even a single transfer to a person — proving that humans are susceptible — would bring catastrophic consequences with limited options.”

Rowledge and the other experts used mad cow as an example of what can happen when diseases evolve.

“The notion that there is insufficient proof that CWD will transfer to humans is deceptive and irresponsible, just like BSE… With the BSE inquiry, one of its key lessons was that they said that they should not have been waiting for a person to die.” (source)

There haven’t been any documented cases of CWD in Manitoba, but the government there is planning to build a health lab in Dauphin to detect the disease because experts believe it will eventually arrive in the province, CBC News reports:

The province already has a lab in Dauphin as part of its disease surveillance programs, and chronic wasting disease is the main concern, a Sustainable Development spokesperson said.

The province has extended the surveillance zone for the disease, in which hunters are required to submit heads of their kills for analysis. The province anticipates a rise in samples, the provincial spokesperson said. (source)

Brian Kotak, managing director of the Manitoba Wildlife Federation, told CBC News that a growing body of research suggests the diseased proteins found in deer infected with chronic wasting disease may impact human health when consumed. That’s one reason he’s pleased the province is working to build a lab. “That’s fantastic news and really proactive on their part,” he said.

There are a few things you need to know about CWD.

A 2017 study titled Chronic wasting disease: Emerging prions and their potential risk states that “CWD is one of the most contagious prion diseases”.

Plants can act as a carrier of CWD because they can uptake prions from contaminated soil and transport them to different parts of the plant.

An infected animal can shed the disease a lot over a year (via urine and feces), and its decomposing body can further infect the soil and therefore the plants.

Killing CWD is impossible. Antibiotics do not kill CWD. Neither does cooking.

To give you an idea of just how persistent prions are: In 1985, the Colorado Division of Wildlife tried to eliminate CWD from a research facility by treating the soil with chlorine, removing the treated soil, and applying an additional chlorine treatment before letting the facility remain vacant for more than a year. Those efforts failed – they were unsuccessful in eliminating CWD from the facility.

CWD prions are accumulating, and prions have a long incubation period — sometimes as long as 30 to 40 years in humans. A person can be infected and not know it for decades.

Here’s how you can avoid infection with CWD.

While CWD is scary and is spreading through cervids in North America, this doesn’t mean that you must completely avoid game. However, you have to be careful.

The CDC offers some guidelines for hunters:

Hunters harvesting wild deer and elk from areas with reported CWD should check state wildlife and public health guidance to see whether testing of animals is recommended or required in a given state or region. In areas where CWD is known to be present, CDC recommends that hunters strongly consider having those animals tested before eating the meat. (source)

In addition, the agency advises hunters to avoid eating meat from deer and elk that look sick or test positive for CWD. They should wear gloves when field-dressing carcasses and minimize the handling of brain and spinal cord tissues. As a precaution, they should avoid eating deer and elk tissues known to harbor the CWD agent (e.g., brain, spinal cord, eyes, spleen, tonsils, lymph nodes) from areas where CWD has been identified.

In addition, hunters should wash their hands and instruments thoroughly after field dressing is completed. When taking the game to be processed, they should request that their animal is processed individually, without meat from other animals being added to the meat from their animal.

If hunters notice animals that are unusually thin and exhibit behavior such as having trouble walking, as well as those acting tame around humans and allowing someone to approach them, they should notify their state wildlife agency.

The CDC also states that “a negative test result does not guarantee that an individual animal is not infected with CWD, but it does make it considerably less likely and may reduce your risk of exposure to CWD.”

Is this how the real zombie apocalypse starts?

Will prions be the agent that wipes out humanity decades from now? Have any cases of CWD been detected in your area? Please share your thoughts in the comments.