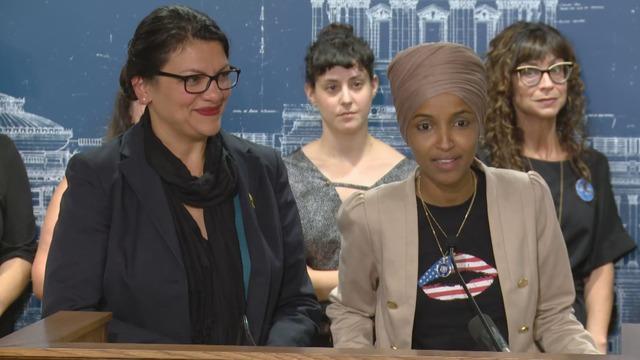 The antisemitic and anti-American Reps. Ilhan Omar and Rashida Tlaib’s recent desire to visit the West Bank via Israelwas a total political move to make Israel and the Trump Administration look bad. Both Omar and Talib knew the likelihood of Benjamin Netanyahu allowing them into Israel to visit the West Bank would be next to zero. This mindset became evident after Tlaib appealed to Israel Interior Minister Aryeh Deri for permission to visit on humanitarian grounds, citing her elderly grandmother. Writing, “I will respect any restrictions and not promote boycotts against Israelduring my visit.” After being granted permission to visit, Tlaib refused and attacked Israel in tweets arguing that the conditions she agreed to were humiliating and also stating, “I have decided that visiting my grandmother under these oppressive conditions stands against everything I believe, in fighting racism, oppression, and injustice.”

What the Socialist-controlled media keeps silent is Tlaib and Omar planned to hold anti-Israel rallies in the West Bank and the Temple Mount in Jerusalem to incite violent demonstrations.

Tlaib’s excuse for visiting her grandmother is also a ruse given that she has never even met her.

The absolute goal of the proposed trip was to gather up as much ire against Israel and the Trump Administration as possible by citing both as racist, oppressive, and unfair to people of color and different ideologies. This while being just that, themselves by their desire to incite violence against Jews, the state of Israel, and the Trump Administration for its support of the Jewish state.

Neither Tlaib or Omar ever expected to travel to the West Bank via Israel, the whole proposed trip was entirely a political move to show President Trump as being racist, intolerant, and completely biased against those of different ideologies. The end goal was to have President Trump impeached based on these accusations.

In reality, both Tlaib and Omar need to be tossed out of office based on both being what they accuse President Trump of, since they are blatantly anti-American, hate most of the people they are supposed to represent, and the very constitution of the country their office demands they defend.

h/t The Washington Standard
Tony is an established writer with articles in over 20 publications of differing topics. He was Political Commentary Columnist for the Cimarron News Press in Cimarron, New Mexico from 2001 to 2003. Tony was also a regular writer for several small coastal newspapers in Southern Oregon during the early 1990’s. BOOKS: Aura Visions: The Origin Prophecy,Enviroclowns: The Climate Change Circus,Strange Sounds: A Research Report