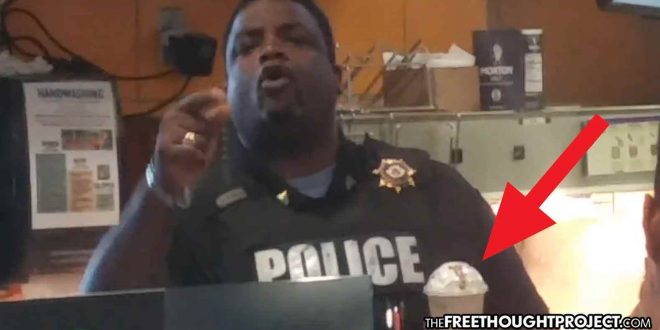 District Heights, MD — A rather disturbing video was shared with the Free Thought Project this week showing a District Heights police officer assault a man for filming him. According to witnesses, the officer was stealing a McDonald’s Smoothie and became angry when a man filmed him in the act.

The video was uploaded to YouTube on Monday. It shows a District Heights cop walk behind the counter at McDonald’s, and make his own smoothie. Some of the patrons inside McDonald’s began questioning the officer who only identified himself as a Sergeant.

“Why are you behind the counter?” a woman can be heard asking the officer.

“This is my smoothie!” the cop replies.

“Is this your McDonald’s?” the woman asks. “I’m going to get your supervisor out here.”

“Get your supervisor out here,” the cop says sarcastically.

When the man recording asks the officer for his name and badge number, the officer refuses to answer and instead asks why he’s being recorded.

“That’s irrelevant,” the man answers. “This is a public lobby.”

While McDonald’s is not a public space, it is open to the public and First Amendment rights are not suspended unless explicitly noted by the property owner. Since the owner or manager did not tell the man to stop filming, or ask him to leave, he was within his rights to continue filming.

As the cop walked from behind the counter, the tone was somewhat humorous. However, that quickly changes when the officer gets near the man filming him.

The officer then grabs the man, who accurately describes this as assault.

“Do not record me!” the officer says. He then sets down his smoothie — that he made for himself — and proceeds to attack the man filming.

According to the person who took the video, after the video ended, the officer pulled out his pepper spray and elbowed the man.

As the incident unfolded, a woman can be heard on the phone with the District Heights police department, asking for a supervisor. We are told by the person who filmed the officer that a supervisor never showed up.

Many of the comments on the video also point out that the officer could’ve committed a health code violation for going behind the counter when he does not work at McDonald’s.

“The Health Dept needs to be informed that customers are in the food handling area. This has so many wrongs it’ll never be right,” one YouTube user wrote. “Report the restaurant to the health and food inspector for allowing a non-employee behind the counter to operate equipment that dispenses food, if they want to give the officer free food, make it cost as much as you can when they give them a $2500 fine… his dirty hands touched equipment and cups that now contaminates every employee after him, that’s why its a health code violation for non-employees to serve themselves behind counters.”

“Sure seems to be a lot of wrong here. He shouldn’t be behind the counter even if did pay for that. And grabbing someone who hasn’t committed a crime is called battery. It’s also federal crime when a cop does it under color of law (18 USC 242),” another YouTuber said.

While the Free Thought Project has reported on countless stories of police officers assaulting people for filming, this is the first time we’ve reported on a cop assaulting someone for filming while allegedly stealing a smoothie from McDonald’s.