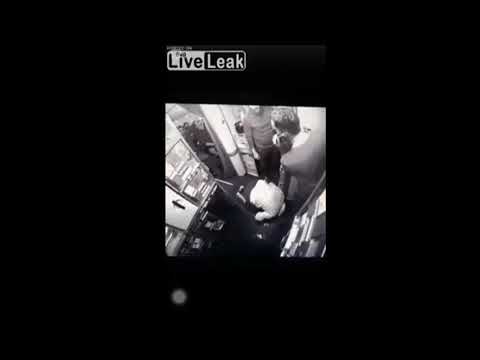 Can you imagine being on a plane and watching as a Muslim goes to the busiest part of the plane, gets down on his knees, sticks his face to the floor and begin to pray?  Do you think you and the other passengers might try and subdue him?  What would you think if he wouldn’t get out of the way while flight attendants tried to do their jobs?  Furthermore, what would you think if when he did finish his “prayers,” he got up and immediately punched one of the flight attendants in the face?  Well, it happened on a French flight.

An Air Transavia France took a punch to the face after a Muslim decided to block the walkway in front of the toilet and pray.

A passenger plane was forced to make an emergency landing in Moscow after a wannabe pilot punched a stewardess in the face and said there was a bomb on board.

The bearded student terrorised other passengers and crew, saying there would be an explosion ‘soon’.

Davlatkadam Davlatkadamov, from the former-Soviet republic of Tajikistan, fought with other passengers before punching a stewardess in the face as she tried to calm him down.

The 25-year-old went ‘berserk’ by fighting, attacking the female flight attendant and then telling everyone to pray to Allah.

The Ural Airlines Airbus A321 returned to Moscow soon after take-off from Zhukovsky airport yesterday.

A video shows the ‘air hooligan’ after he was forced to a seat with his hands and feet bound together with cling film ahead of the emergency landing at Zhukovsky airport in Moscow.

A fellow passenger guarded him as the almost-full plane returned to Moscow – telling him to ‘keep silent’.

At one point he slapped the troublemaker on the face.

The incident was on a scheduled flight from Moscow to Dushanbe, the capital Tajikistan.

He was detained by police following the plane’s landing.  The plane was searched for a bomb before being allowed to take off again.

The flight attendant was hurt, but it was not life threatening.

The man’s father said he had applied for a Russian passport but was refused.  It seems now that we know the reason for the refusal.

h/t The Washington Standard
Tim Brown is an author and Editor at FreedomOutpost.com, SonsOfLibertyMedia.com, GunsInTheNews.com and TheWashingtonStandard.com. He is husband to his “more precious than rubies” wife, father of 10 “mighty arrows”, jack of all trades, Christian and lover of liberty. He resides in the U.S. occupied Great State of South Carolina. . Follow Tim on Twitter. Also check him out on Gab, Minds, MeWe, Spreely, Mumbl It and Steemit
Share
Tweet
Share
Pin