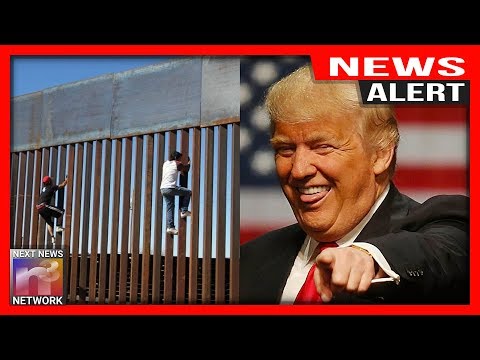 Trump’s wall has hit snag after snag, it seems, but they have started construction.

As Gary says, “The President’s new wall is working.”

Border Patrol security video captures a failed attempt by a pair of migrants to cross a new border wall section near San Diego, California. The migrants attempted to scale the new bollard wall section but could not reach the top. Agents responded and apprehended the duo.

U.S. Customs and Border Protection (CBP) officials erected new border barriers in the San Diego Sector. The barrier includes a large bollard wall with steel plates along the top. The barrier also includes two rows of fencing with a security road and electronic monitoring. The Mexican side of the barrier is not completed, as seen in the border security video.

Unable to scale the new primary border barrier and flee back to Mexico, two men who entered the U.S. illegally near San Diego were arrested by #BorderPatrol. Barriers give agents the time they need to respond and contain illicit activity at the immediate border. @CBP pic.twitter.com/zQH1GAPPZx

Two men passed through the incomplete section of the outer barrier and moved across the security road to the completed bollard wall. They attempted to scale the wall but failed. As responding agents began to arrive, the migrants fled back to some of the construction pallets and attempted to hide.

Two other people can be seen on the U.S. side of the wall in the same area as the attempted crossing. One is on a ladder that reaches the top of the wall. It appears they fled back into the community after agents approached.

Is it just me, or does this warm your heart?

The Trump Wall will be formidable upon completion.

Dems continue to whine about construction and do everything they can to block it:

That’s how politics is played folks.

Why does this have to be political?

I’ll tell you why…

Democrats don’t give a damn about those people.

They only give a damn about getting VOTES from those people.

It’s also vitally important to note that it is POLITICIANS and not Democrat VOTERS who want the flood gates to open.

Yes America, liberals are starting to wake up to the insanity of their party’s policies.

Trump should win in a landslide of epic proportions in 2020.

His opponent just lost two illegal votes that they were counting on, and desperately needed.