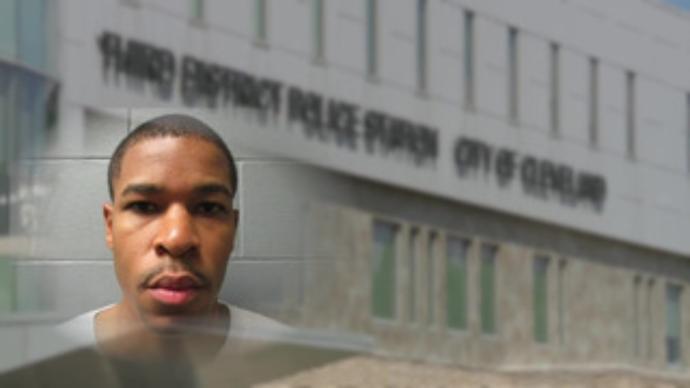 Cleveland, OH — Imagine for a moment that your young daughter is waiting for the bus at the same bus stop she waits at every day and a cop pulls up. The children may feel one of two things, either curiosity or — if they have had negative experiences with police before — fear. However, for one little girl, the feeling turned to sheer terror when the cop attempted to kidnap her and then opted to relieve himself, all over her—while filming the entire thing.

Officer Solomon Nhiwatiwa, 34, was this officer and on Tuesday, he was arrested for his horrifyingly disgusting behavior. Nhiwatiwa now stands charged with attempted kidnapping, pandering obscenity, disseminating material harmful to juveniles, assault, endangering children, child enticement, interfering with custody and public indecency. He has also been suspended without pay.

“He will be held accountable,” Cuyahoga County Prosecutor Michael O’Malley said. “It’s my office’s mission to ensure he never wears the badge of a police officer again.”

Never wearing a badge again is not nearly enough punishment for this cop’s crimes. If found guilty of these crimes, this man needs to be removed from society for a very long time.

The girl was sitting on the sidewalk waiting to be picked by a school bus. Nhiwatiwa drove up and tried to entice the girl to get inside his car by asking if she needed a ride to school, prosecutors said.

The girl repeatedly refused and Nhiwatiwa initially drove off. He returned about one minute later and recorded himself on his cellphone urinating on the girl, prosecutors said.

The girl’s mother reported the incident to Euclid police, who pieced together the connection, prosecutors said.

When reached for comment, Cleveland Police Union President Jeff Follmer refused to decry the officer’s alleged actions, saying on that “he deserves his day in court like everyone else.”

While this is certainly true, that even the vilest of criminals deserve due process, refusing to condemn the alleged disgusting activity of this officer is disturbing.

“These actions are impossible to comprehend,” O’Malley said. We agree.

Chances are that if this officer was comfortable pulling up to a bus stop and filming himself urinate on a little girl, that he has done something similar before. We encourage anyone who has been a victim of police misconduct to come forward and alert authorities.

While this case will likely be spun as some incident related to a bad apple, the truth is that child predators are ousted all the time from within the ranks of law enforcement. As TFTP reported earlier this year, inside information into the years-long child abuse saga involving Louisville Metropolitan Police Department (LMPD) officers was revealed in May. This incident involved multiple child victims and officers and was in just one department.

The city commissioned former U.S. Attorney Kerry Harvey to investigate the LMPD Explorers program for children to determine if sexual misconduct, abuse, and even rape were widespread with police officers involved in the program.

Hardly an isolated incident, in total, a series of seven lawsuits names more than eight current or former LMPD officers.

In a disturbing description to FOX News, one of the victims went into graphic detail on how he was abused and raped by people he looked up to.

“C.F.,” who uses a pseudonym to protect his identity in a civil lawsuit, said that what should have been a golden opportunityto learn about law enforcement became a nightmare of exploitation and sexual abuse.

Two former LMPD officers have already been convicted of serious crimes, as The Free Thought Project reported, and the city, with good reason, wanted to know more about how police handled the complaints from parents and reports children were being groomed, propositioned, and even raped.

Brandon Wood…allegedly raped a teenage boy, both in [his]car and in a residence, and filmed the crime for the purposes of producing pornography. [Kenneth] Betts and Wood were police officer mentors in the Youth Explorer Program for kids who want to one day become law enforcement officers. It was inside the mentorship program that they are accused of finding their victims.

Betts struck a plea deal which was going to allow him to only serve 10-15 years, but U.S. District Judge David Hale said this sentence was too lenient and issued a continuance for sentencing to get Betts to serve more time.

None of these charges would have happened had the victims not sought out lawsuits as the department had no interest in pursuing their own—allowing this abuse to go on for years.