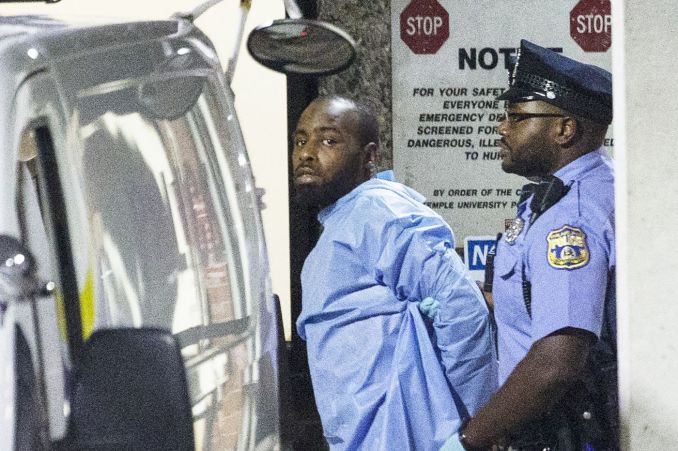 Last week, a man shot 6 Philadelphia police officers while a crowd mocked them.  Not only did we discover the shooter, Maurice Hill, was not only a Muslim, but also has been a federal informant for years.

US Attorney William McSwain quickly blamed Philadelphia District Attorney Larry Krasner, who McSwain said promoted “a new culture of disrespect for law enforcement in this City” in the aftermath of the shooting and seven hour standoff with Hill.

“It started with chants at the DA’s victory party – chants of “F*** the police” and “No good cops in a racist system,” wrote McSwain.

However, documents that were obtained by The Appeal, expose that Maurice Hill was actively involved with law enforcement long before Mr. Krasner ever came into the picture.

“The [district attorney’s office]has no interest in engaging with Bill McSwain’s inappropriate attempts to run for political office from his taxpayer-funded perch in Donald Trump’s DOJ,” Krasner spokesperson Jane Roh told The Appeal.

McSwain failed to mention, however, that alleged shooter Maurice Hill’s interactions with law enforcement predated Krasner taking office. Nor did McSwain acknowledge that the 36-year-old Hill, who on Saturday was charged by Krasner’s office with attempted murder and multiple counts of aggravated assault related to the incident, has been a federal informant for years, according to documents obtained by The Appeal.

In June 2008, Hill entered a guilty plea the U.S. District Court for the Eastern District of Pennsylvania for being a felon in possession of a firearm. He was sentenced in the case in 2010. In an April 2010 sentencing memorandum filed with the court, Hill’s attorney Wayne Maynard stated that federal prosecutors filed a motion for a downward departure from Hill’s guidelinesentence because he provided substantial assistance to the federal government. “He has testified before the Grand Jury on two occasions, was willing to testify at trial, and provided information about a shooter that led to an arrest,” Maynard wrote. “He has cooperated with the Government and provided information that has and will likely continue to imperil his safety and that of his family.”

Maynard argued that Hill should receive a lower-than-average sentence because of his cooperation and that a federal prosecutor made a similar argument for such a sentence. The federal prosecutor’s sentencing memorandum was sealed by the court, so the specifics of the downward departure are unknown.

In April 2010, Hill was sentenced to 55 months in federal prison followed by three years on supervised release. That year, the average sentence for a person convicted of being a felon in possession of a firearm was more than 75 months in prison, according to statistics published by the U.S. Sentencing Commission.

According to the agency, roughly one-quarter of all people sentenced in federal court received a sentence below the standard guideline minimum, the majority of whom received sentencing relief for providing substantial assistance to the federal government.

Prosecutors often file substantial-assistance motions in these cases; upon such a motion, which states that a defendant has provided substantial assistance in an investigation or prosecution of another person who has committed an offense, the court may depart from the sentencing guidelines. However, because much of Hill’s federal court record is sealed, it is unknown whether such a motion was filed in his case.

Hill has a lengthy arrest record dating back to when he was a teenager, but has avoided a conviction in many of the cases brought against him.

Tyler Durden adds, “In May of 2016, the DA’s office offered Hill a plea deal which was rejected, according to a copy of his charging docket. Three months later, Judge Charles Hayden granted a motion to suppress evidence in Hill’s case – after which prosecutors dropped it in October of that year. The records were expunged from Hill’s records after Pennsylvania passed the Clean Slate law in 2018.”

Do you see what happens when you negotiate with criminals?  You don’t render justice.  You embolden them to commit great, more heinous crimes.

Now, you’re seeing the “wisdom” of the government rather than the wisdom of God in the matter.  The Bible would render a judgment of a death penalty in the matter now against Mr. Hill, but I’m doubtful that we’ll see anything close to that by the state.

Instead, Hill’s victims and others not even affected by his crimes will most likely have their property held hostage and a gun to held to their heads with threats of imprisonment to pay taxes for Hill’s food, clothing and housing for however long he is sent to prison, if they even send him to prison, which I assume they will, instead of him being put six feet under for attempted murder.