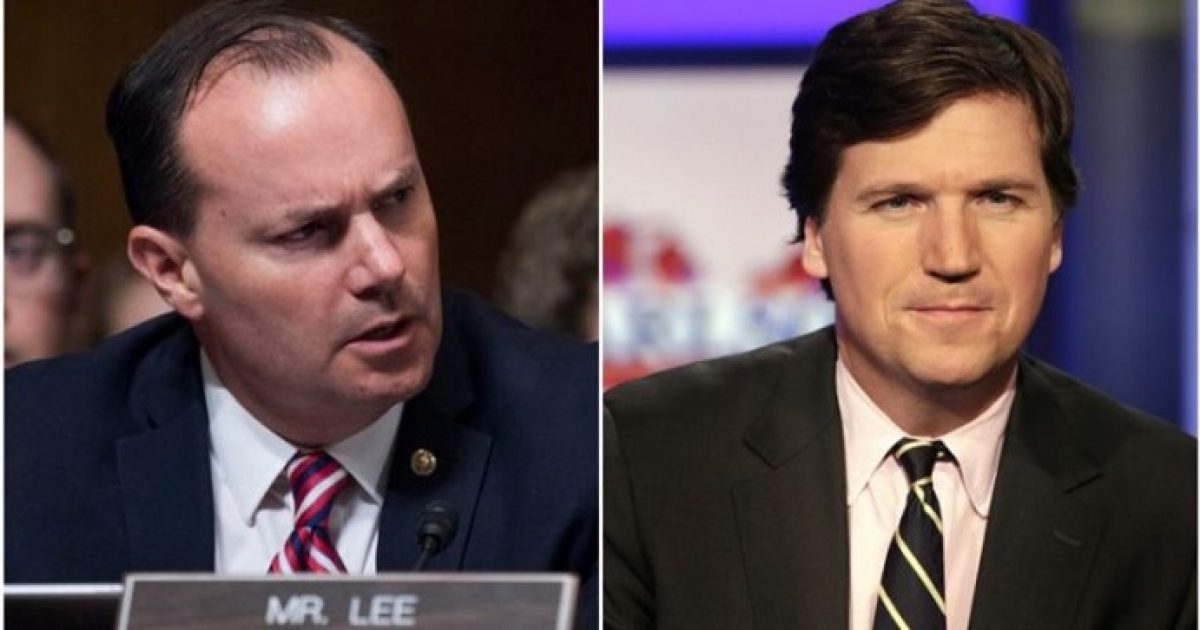 By JonDougherty at The National Sentinel

Fox News host Tucker Carlson, who has warned that President Donald Trump could lose in 2020 if the federal government did not address how big tech is working to manipulate the election next year, blasted Sen. Mike Lee (R-Utah) over his ‘shilling’ for Google following the company’s investments in Salt Lake City and to his campaign.

Lee, Carlson noted, was once a vocal opponent of the censorship of conservatives by tech giants like Google, Facebook, Twitter, and YouTube, but now even opposes a rudimentary investigation into the companies’ use of their social media platforms to shape public opinion.

“Lee has questioned whether Congress should even bother with antitrust investigations of tech companies. Lee has introduced legislation that would make it harder for the government to block corporate mergers. Lee has complained about the E.U. imposing fines on Google for its behavior,” Carlson said Tuesday night during his show.

The host noted that Lee’s position on Google, especially, has changed as the tech company spent millions in his state on high-speech Internet and other tech infrastructure, while also funneling money to Lee’s campaign war chest.

“Starting in 2013, Google spent millions of dollars rolling out its high-speed Internet service, Google Fiber, in both Provo and Salt Lake City, Utah. In 2015, Google hosted a high-profile fundraiser for Lee at its Silicon Valley law firm,” said Carlson.

“The fundraiser got a lot of attention, so Google backed out. But the fundraiser itself went ahead, and Lee received a sizable donation from Google’s political action committee,” Carlson added.

“Ever since that fundraiser and the money he took, Lee’s interest in having the FTC investigate tech companies seems to have completely evaporated.”

Carlson noted further that Google hired Lee’s former senior counsel from the Senate Judiciary Committee while ingratiating itself to Neo-liberal think tanks in D.C. like the Heritage Foundation and the American Enterprise Institute. That helped win Lee over as Google seeks to make inroads with Republican lawmakers.

In crafting its message, Google has managed to successfully lobby both sides of the aisle to prevent Congress from taking any serious legislative action that would cut into its market share — even as the tech giant has been found to be plotting against the Trump administration and the U.S. government in general, according to a recent interview with a company whistleblower.

It’s yet another example of the corrosive libertarianism that upsets and interferes with GOP politics, according to Carlson.

“The message they pushed was that Google and other tech monopolies are really something conservatives ought to celebrate. These companies are triumphs of the free market. We should be grateful for them. And worrying about their growing power and the ways they use that power is somehow socialist and un-American,” Carlson said.

“Of course, Google itself is socialist and un-American, so the argument never really made sense. But Mike Lee bought it completely,” he added.

As for Lee, Carlson noted that he doesn’t just do the bidding of Google; he also seeks to assist Facebook in keeping the legislative barbarians away from the gate.

“When Facebook’s Mark Zuckerberg came before Congress last year, he asked them only at the softest of softball questions. And a month later, Facebook announced it would build a $750 million data center in Utah. A coincidence? Maybe it is a coincidence, or maybe it’s every bit as corrupt as it seems,” Carlson said.

He said he attempted to have Lee on his program to explain but the senator declined.

Tucker then slams "Conservative" DC Think Tanks for telling us that worrying about Big Tech was "socialist" & "un-American":

"Of course Google itself is socialist & un-American so the argument never really made sense." pic.twitter.com/Z92OVt91yL