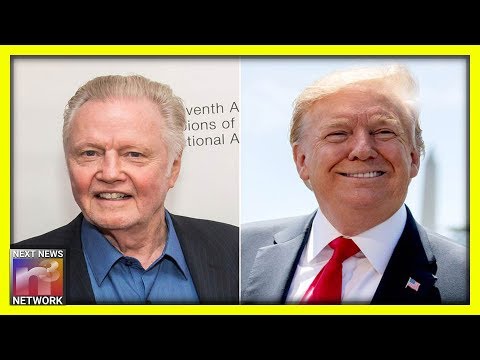 Jon Voight is one of the few remaining men in Hollywood who isn’t afraid to speak the truth and stand for solid, ethical principles.

“…Love is what we should be voting for…”

Can you imagine the reaction from liberals when they hear that?

Jon Voight just said that the man that they HATE, stands for LOVE.

I would not say that Donald Trump is the most pure-hearted man in America, but compared to the average Democrat he looks like a saint.

In a new video, veteran actor Jon Voight praised President Donald Trump as the “greatest president of this century.”

With a caption reading, “Jon Voight’s message of peace and love,” Voight also slammed liberals and the “radical left” for their hate and “extreme anger” over the president.

“This is not peace,” The Oscar-winner said in the Sunday video. “This is not love. This is hate among the radical left. No amount of book smart will show the given policy of what truth stands for. Truth is a powerful emotion. Love … is what we should be voting for.”

“And I must say that we — the Republican Party — have voted for renewal, for a place of safety, a community where all can have peace,” Voight added. “But this is war among the left. They have hate. It’s like a venom. No words of God, no words of love, but a radical emotion of hate.”

Very well said Jon, we need more like you in the entertainment industry.

Is what he said true?

Dems claim that a woman’s right to choose is LOVE.

Some might think that abortion is about a Mom’s right to choose, but they are very naive.

Abortion was started as a way to weed out the undesirables from our population.

Or is it for votes and general disregard for the safety of their fellow Americans?

The Democrats aren’t against a wall.

They are against a wall that Trump gets credit for.

The Democrats desire power and try to justify their evil policies.

It’s all politics and, unfortunately, conservatives must admit that we have some clowns of our own.

Jon Voight is not a mega-million-dollar draw at the box office, but he is one of the few in the land of fruits and nuts that still speak the truth.

We need more high-profile athletes and entertainers like him.