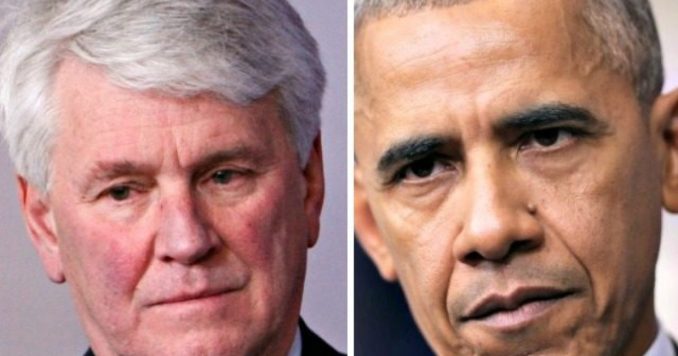 Except for a handful of reports, the mainstream media has been largely silent about the criminal trial of the usurper Barack Hussein Obama Soetoro Sobarkah‘s first White House counsel, Greg Craig.  Craig is facing charges “connected to a Ukraine-related legal project.”

“Craig served in 2009 as President Barack Obama’s first White House counsel, was a key figure in Obama’s first presidential bid and had previously joined President Bill Clinton’s White House to defend him against impeachment,” POLITICO reported. “Craig is charged with scheming to conceal material facts during a Justice Department inquiry into his Ukraine work and whether it required him to file under the Foreign Agents Registration Act.”

POLITICO went on to report:

Prosecutors say Craig was intent on not doing so because he believed that such a filing would harm his chances of a senior post in a future Democratic administration. Detailed disclosures called for under that statute could have undermined the credibility of the review by exposing the secret funding of the $4.6 million project by Pinchuk and by revealing a parallel assignment that Craig’s law firm at the time, Skadden Arps, had to advise Ukraine’s government on a planned second trial of Tymoshenko on other charges, prosecutors contend.

While Craig isn’t charged with failing to register as a foreign agent, a key issue at the trial is whether he was honest with Justice Department officials about his role in release of the report, which included providing an advance, embargoed version of the review to the veteran New York Times national security reporter David Sanger.

Additionally, a pretty short piece at The New York Times was skeptical.

In a report commissioned by the government of Ukraine, a team of American lawyers has concluded that important legal rights of the jailed former prime minister, Yulia V. Tymoshenko, were violated during her trial last year on charges of abusing her official power, and that she was wrongly imprisoned even before her conviction and sentencing.

The lawyers, led by President Obama’s former White House counsel, Gregory B. Craig, concluded that Ms. Tymoshenko was denied legal counsel at “critical stages” of her trial and that at other times her lawyers were wrongly barred from calling relevant witnesses.

Those two findings suggest that she could have some success in a pending appeal before the European Court of Human Rights.

But over all, the lawyers, from the firm of Skadden, Arps, Slate, Meagher & Flom, seemed to side heavily with the government of President Viktor F. Yanukovich, which commissioned their report. They concluded that Ms. Tymoshenko’s conviction was supported by the evidence presented at trial, and they found no evidence in the trial record to support to her main contention: that her prosecution was a politically motivated effort by Mr. Yanukovich, her archrival, to sideline her and cripple Ukraine’s main opposition party.

“The trial court based its finding of Tymoshenko’s guilt on factual determinations that had evidentiary support in the trial record,” the lawyers wrote. “Based on review of the record,” they added, “we do not believe that Tymoshenko has provided specific evidence of political motivation that would be sufficient to overturn her conviction under American standards.”

In an interview on Wednesday, Mr. Craig, one of the most connected lawyers in the Washington establishment, said his team was not able to judge the local politics that brought Ms. Tymoshenko to trial on charges of abusing her authority in agreeing to a natural gas deal with Russia when she was prime minister. He acknowledged that Secretary of State Hillary Rodham Clinton was among many Western leaders who have criticized the prosecution as crass political reprisal.

“We leave to others the question of whether this prosecution was politically motivated,” he said. “Our assignment was to look at the evidence in the record and determine whether the trial was fair.”

Peter M. D’Abrosca adds, “Part of the trial, which is ongoing, involves testimony from Rick Gates, former right-hand-man to Paul Manafort, who was President Donald J. Trump’s campaign manager. Manafort was convicted on financial crimes unrelated to the Trump campaign from more than a decade ago, and the media went berserk because some of Manafort’s business dealings were in Ukraine. In plain, Manafort’s case fit hand-in-glove with their now-debunked narrative that Trump was a Russian stooge.”

“Gates testified for the prosecution – against Craig – Thursday,” D’Abrosca continued.  “Yet there has not been a single mainstream cable news segment on the subject. Compare that to the wall-to-wall coverage the press doled out during the Manafort trial, and you begin to see the omnipresent bias of our esteemed media.”

Manafort and Craig are connected via an “independent review” of the criminal abuse-of-power trial of former Ukrainian Prime Minister Yulia Tymoshenko in 2012. Craig and his law firm handled the review, while Manafort’s main client was former Ukrainian President Viktor Yanukovych. The review was bankrolled by Victor Pinchuk, a Ukrainian steel oligarch who backed Yanukovych.

“Detailed disclosures called for under [the Foreign Agents Registration Act]could have undermined the credibility of the review by exposing the secret funding of the $4.6 million project by Pinchuk and by revealing a parallel assignment that Craig’s law firm at the time, Skadden Arps, had to advise Ukraine’s government on a planned second trial of Tymoshenko on other charges, prosecutors contend,” according to the report.

The charges against Craig relate to whether he lied to the Department of Justice about releasing the report. The DOJ contends that he gave an advanced copy of the report to The New York Times.

POLITICO pointed out, “Craig and his defense lawyers have argued that his contacts with the press were solely aimed at protecting his and Skadden’s reputation in the face of repeated indications that Manafort’s team and others working for Ukraine’s government intended to falsely portray the rather equivocal report as a vindication of the prosecution and imprisonment of Tymoshenko, Yanukovych’s key political rival.”

Mr. Craig has pleaded not guilty.

However, it’s interesting that while Barry has claimed that no one in his administration was indicted, the reality of the level of corruption in the Obama administration is finally seeing the light of day, at least in the case of Mr. Craig.

Yet, we’re waiting to see 24-hour news coverage of the Craig trial that will never come.