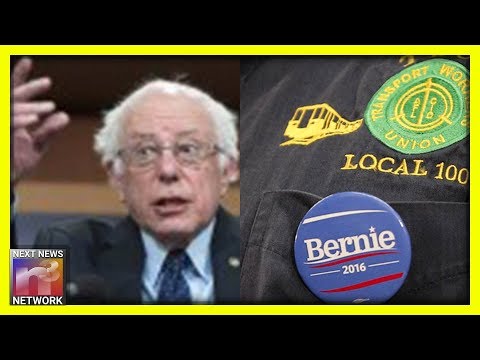 What in the world is Bernie Sanders thinking?

After his latest ramblings most union workers are NOT feeling “The Bern” but rather just feeling “Burned” by a man who is supposedly in their corner.

As a former union member that was given a choice, I can tell you that this is one of the major reasons people join unions (when given a choice to do so).

Did Bernie Sanders just lose the union vote with his answer on union health benefits? According to union leaders (see below), Sanders will lose the industrial Midwest with his proposal of eliminating union healthcare benefits.

Bernie Sanders was asked during a Q & A in Davenpost, Iowa if the government takeover of health care would eliminate union health benefits.

His answer was a flippant, “Yeah, absolutely”.

According to the Washington Examiner, the candidate that promotes medicare for all will lose the vote in the “industrial Midwest”:

A Democratic nominee who supports replacing private health insurance with a government-run system would lose union voters in battleground states Democrats must win to reverse President Trump’s 2016 victory, according to union officials.

Democrats risk ceding the industrial Midwest to President Trump, labor operatives warned in interviews with the Washington Examiner. Trump victories in Rust Belt states such as Michigan, Pennsylvania, and Wisconsin demolished what Democrats figured to be a “blue wall” cemented by hard hats who would support the Democratic nominee, Hillary Clinton.

Among the leading Democratic contenders, Elizabeth Warren and Bernie Sanders propose abolishing private insurance and turning healthcare over to Washington.

Bernie recently struggled to break the news that ‘Medicare for all’ won’t be free:

Jake Tapper asked Bernie Sanders about whether ‘Medicare for all’ will be free or will the middle class be taxed.

Sanders stuttered a little and then said under his breath that taxes will be necessary: “We’ll have to do that.”

Noooo! Didn’t they tell everyone it would be FREE?

The left is totally turning on their base.

They can’t even hide the drive toward pure socialism and total government control anymore.

Sanders has been unraveling badly in the lead up to 2020:

Contrary to the beliefs of the left, people are not quite that “dumbed down” yet and get ready…

…because 2020 is going to be a Trump landslide of epic proportions, no matter what the media says.

People no longer put any faith in the anti-Trump media.

No one believes that, but…

Yes people, it’s that bad out there.

NONE of the major networks are in our corner.

We will continue to tell the truth and HOPE people notice.