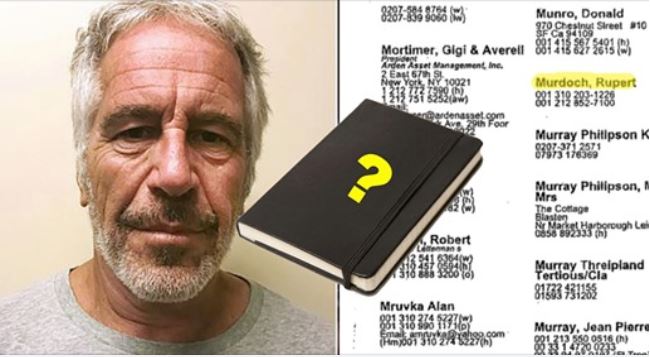 Speculation, Opinion and Analysis by Patriot The Elder – It appears that Jeffrey Epstein’s death is paying dividends for a whole slew of people who were players in his network of high-powered elites who he allegedly put together with underage girls.

Gawker published the contents of Epstein’s little black book in full in January of 2015.  While the phone numbers were redacted, the names weren’t.

The 92-page phone book contains literally thousands of names including those of high-profile politicians, academics, diplomats, and business people.

The Miami Herald reports that, working together with McClatchy News Service, they have attempted to contact as many of those people listed in Epstein’s book, with U.S. phone numbers, as possible.

The results weren’t surprising.  No one was admitting to anything,

“I think I might’ve run into him once, at a cocktail party.”“We might’ve exchanged business cards at one time.”

“A friend of a friend knew him… I think.”

How convenient for them that dead men tell no tales.

No one knows for sure how many of the names in Epstein’s rolodex, if any, were participants in what is now acknowledged to likely be a fairly significant network of young girls and high-profile pedophiles/sex criminals.

The fact that Hillary Clinton’s attorney, Cheryl Mills’ phone number and email address appear on page 38, but neither Bill nor Hillary Clinton, nor John Podesta’s name appears to be listed, raised my eyebrows.

Adding to our skepticism that this isn’t “the” book is the fact that it’s still readily available online.  Ya think the Masters of The Universe in Silicon Valley would allow that?

The absence of Bill Clinton’s name in particular, suggests that some names are either deliberately obscured under aliases, or that there’s a second (or third?) list of numbers for “players.”

It should come as no surprise that mums the word.  Naturally, no one wants to admit their own involvement with Epstein. And, after seeing what happened to Epstein, no one has the appetite for talking about others who they believe might’ve been.

Epstein’s address book included the home phone numbers of billionaires, Wall Street titans, Hollywood icons, academicians, and top-tier athletes.  On its face, considering that Epstein was a well-connected billionaire and international traveler, there’s nothing unusual or alarming about that.

However, in the hands of a pedophile, those ties to the rich and powerful can become a useful tool for extortion and control.  Especially when some of those ties are to a powerful ex-president with a power-hungry wife.

Double that skepticism when you add the fact that President Trump’s nominee for Labor Secretary, Alex Acosta, the U.S. Attorney who handed Epstein “the deal of a lifetime,” claims to have been told to back off because Epstein was an intelligence asset.

The relationship between Bill Clinton and Jeffrey Epstein needs to be thoroughly investigated.  Even with Epstein no longer able to tell us about that relationship, I would think that the FBI is capable of piecing things together… if they wanted to.