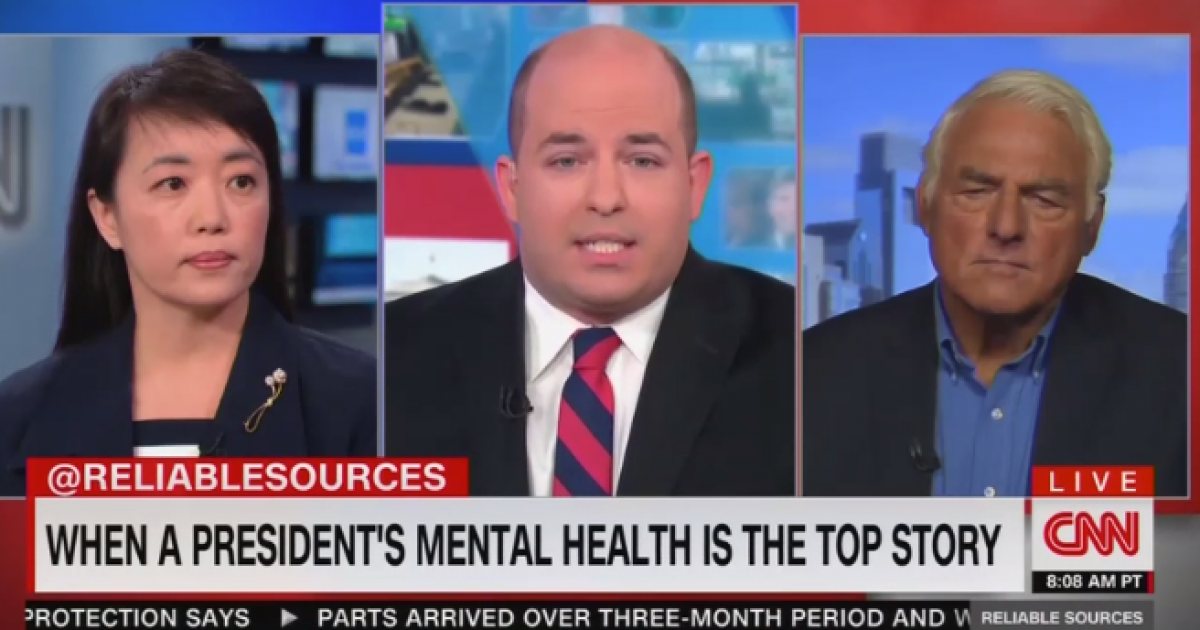 CNN goes to great lengths to push the narrative that Trump is a crazed nutjob and exceedingly dangerous. Brian Stetler brought a shrink guest on CNN, Dr Allen Frances, who characterized President Trump as potentially causing more deaths than Hitler, Stalin or Mao.

The shrink guest on CNN

The interviewer was Brian Stetler, a person we all know hates the President. The two psychiatrists (aka shrinks) on the show “Reliable Sources” (that aren’t), included Dr Allen Frances and Dr. Bandy X. Lee, who were there ostensibly to say that shrinks should be able to “diagnose” the President at will even though they’ve never examined him.

But it was a statement by Frances that was the show stopper. A CNN shrink guest with an agenda .

Trending: Report: Democrats are FINISHED if Trump Declassifies These Documents

The second issue is that calling Trump crazy hides the fact that we’re crazy for having elected him and even crazier for allowing his crazy policies to persist. Trump is as destructive a person in this century as Hitler, Stalin, and Mao were in the last century. He may be responsible for many more million deaths than they were. He needs to be contained but he needs to be contained by attacking his policies, not his person.

How didn’t you fact-check him right then and there, @brianstelter?

“Trump may have killed more people than Hitler and Mao.”

This segment is shameful. https://t.co/zKrIFjwWCu

"Technical difficulties prevented me from stopping my guest on my show from comparing the President of the United States to this." pic.twitter.com/XN0jBbcxyG

Why didn’t Stetler fact-check his guest? Because he wanted that statement out there. Because he hates Trump and thought the statement was good against him. And then he claimed he was “distracted” by a technical problem and didn’t hear the “Dr” (using the term loosely) say it. Nobody believed him.

The thread of the tweet had these remarks – there were many more of them, but these will suffice:

“The problem is giving someone so clearly willing to violate the standards of their profession a platform. No psychiatrist is supposed to comment on the mental health status of someone they have not examined. Astonishing. “

Stelty, you’re just a POS. That’s all you are. Of course you heard it, 100% you heard it. You are just a lowlife bottom feeder with no credibility ravaged by end stage TDS. You, and your show, are meaningless. Outside of your few zombie viewers, most of us laugh at you .

Odd how CNN, a network that has been around since I was a teenager has very specific “technical difficulties”, that cut off conservatives and disallows you to hear things you should have. Not buying it Brian. You let this guy spout that BS, and backtracked when it went viral.

You’re a little petty man and a liar. You knew exactly what he was saying and allowed it. This is low even for CNN. Hope Trump sues the shit out of you, CNN and that quack.