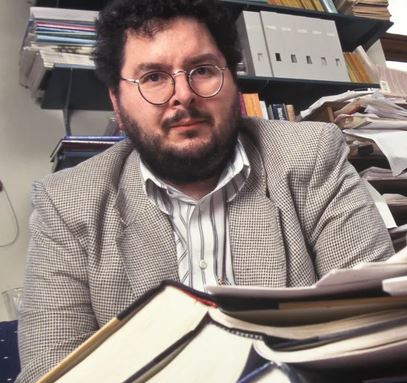 Dr. Eowyn’s article first appeared at Fellowship of the Minds

In a recent article published in the Spring 2019 issue of the Claremont Review of Books, David Gelernter, professor of computer science at Yale University, maintains that the Darwinian theory of evolution is not just accepted as “settled truth,” it is “the basis of a worldview” and a “replacement religion”.

The problem is this: Although called a “theory,” Darwinism is not a scientific theory because it neither predicts nor explains what it means to explain, which is the actual origin of species, because:

Gelernter concludes that “The exceptional intricacy of living things, and their elaborate mechanisms for fitting precisely into their natural surroundings, seemed to cry out for an intelligent designer.” That intelligent designer did not act just once, but “interferes repeatedly,” which suggests (what Thomas Aquinas called) “the first cause” must have a purpose — “some sense of the big picture of life on earth.”

Below are excerpts from Gelernter’s essay, “Giving Up Darwinism“:

Darwinian evolution is . . . basic to the credo that defines the modern worldview. Accepting the theory as settled truth—no more subject to debate than the earth being round or the sky blue or force being mass times acceleration—certifies that you are devoutly orthodox in your scientific views; which in turn is an essential first step towards being taken seriously in any part of modern intellectual life. But what if Darwin was wrong?

Like so many others, I grew up with Darwin’s theory, and had always believed it was true….

Charles Darwin explained monumental change by making one basic assumption—all life-forms descend from a common ancestor—and adding two simple processes anyone can understand: random, heritable variation and natural selection . . . conceived to be operating blindly over hundreds of millions of years….

Yet there are many reasons to doubt whether he can answer the hard questions and explain the big picture—not the fine-tuning of existing species but the emergence of new ones. The origin of species is exactly what Darwin cannot explain.

Stephen Meyer’s thoughtful and meticulous Darwin’s Doubt (2013) convinced me that Darwin has failed. He cannot answer the big question. Two other books are also essential: The Deniable Darwin and Other Essays (2009), by David Berlinski, and Debating Darwin’s Doubt (2015), an anthology edited by David Klinghoffer…. These three form a fateful battle group that most people would rather ignore. Bringing to bear the work of many dozen scientists over many decades, Meyer, who after a stint as a geophysicist in Dallas earned a Ph.D. in History and Philosophy of Science from Cambridge and now directs the Discovery Institute’s Center for Science and Culture, disassembles the theory of evolution piece by piece. Darwin’s Doubt is one of the most important books in a generation. Few open-minded people will finish it with their faith in Darwin intact.

Some I.D.-haters have shown themselves willing to use any argument—fair or not, true or not, ad hominem or not—to keep this dangerous idea locked in a box forever. They remind us of the extent to which Darwinism is no longer just a scientific theory but the basis of a worldview, and an emergency replacement religion for the many troubled souls who need one….

Darwin himself had reservations about his theory, shared by some of the most important biologists of his time. And the problems that worried him have only grown more substantial over the decades. In the famous “Cambrian explosion” of around half a billion years ago, a striking variety of new organisms—including the first-ever animals—pop up suddenly in the fossil record over a mere 70-odd million years. This great outburst followed many hundreds of millions of years of slow growth and scanty fossils, mainly of single-celled organisms, dating back to the origins of life roughly three and half billion years ago.

Darwin’s theory predicts that new life forms evolve gradually from old ones in a constantly branching, spreading tree of life. Those brave new Cambrian creatures must therefore have had Precambrian predecessors, similar but not quite as fancy and sophisticated…. Each must have had a closely related predecessor, which must have had its own predecessors: Darwinian evolution is gradual, step-by-step.All those predecessors must have come together, further back, into a series of branches leading down to the (long ago) trunk.

But those predecessors of the Cambrian creatures are missing. Darwin himself was disturbed by their absence from the fossil record. He believed they would turn up eventually. Some of his contemporaries (such as the eminent Harvard biologist Louis Agassiz) held that the fossil record was clear enough already, and showed that Darwin’s theory was wrong. Perhaps only a few sites had been searched for fossils, but they had been searched straight down. The Cambrian explosion had been unearthed, and beneath those Cambrian creatures their Precambrian predecessors should have been waiting—and weren’t. In fact, the fossil record as a whole lacked the upward-branching structure Darwin predicted.

The trunk was supposed to branch into many different species, each species giving rise to many genera, and towards the top of the tree you would find so much diversity that you could distinguish separate phyla—the large divisions (sponges, mosses, mollusks, chordates, and so on) that comprise the kingdoms of animals, plants, and several others—take your pick. But, as Berlinski points out, the fossil record shows the opposite: “representatives of separate phyla appearing first followed by lower-level diversification on those basic themes.” In general, “most species enter the evolutionary order fully formed and then depart unchanged.” The incremental development of new species is largely not there. Those missing pre-Cambrian organisms have still not turned up.

Some researchers have guessed that those missing Precambrian precursors were too small or too soft-bodied to have made good fossils. Meyer notes that fossil traces of ancient bacteria and single-celled algae have been discovered: smallness per se doesn’t mean that an organism can’t leave fossil traces…. The story is similar for soft-bodied organisms…many fossils of soft-bodied organisms and body parts do exist. Precambrian fossil deposits have been discovered in which tiny, soft-bodied embryo sponges are preserved—but no predecessors to the celebrity organisms of the Cambrian explosion.

This sort of negative evidence can’t ever be conclusive. But the ever-expanding fossil archives don’t look good for Darwin, who made clear and concrete predictions that have (so far) been falsified….

Darwin’s main problem, however, is molecular biology. There was no such thing in his own time. We now see from inside what he could only see from outside….

Darwin’s theory is simple to grasp…variation occurs naturally among individuals of the same type—white or black sheep…. A sheep born with extra-warm wool will presumably do better at surviving a rough Scottish winter than his normal-wooled friends. Such a sheep would be more likely than normal sheep to live long enough to mate, and pass on its superior trait to the next generation. Over millions of years, small good-for-survival variations accumulate, and eventually (says Darwin) you have a brand new species….

[M]olecular biology…explains (it doesn’t merely cite) natural variation, as the consequence of random change or mutation to the genetic information within cells that deal with reproduction. Those cells can pass genetic change onward to the next generation, thus changing—potentially—the future of the species and not just one individual’s career….

But what does generating new forms of life entail? Many biologists agree that generating a newshapeof protein is the essence of it. Only if… Darwinian evolution is creative enough to do that is it capable of creating new life-forms and pushing evolution forward….

Your task is to invent a new gene by mutation—by the accidental change of one codon to a different codon…. But if you mutate your way to an actual, valid new gene, your new gene can create a new protein and thereby, potentially, play a role in evolution….

Douglas Axe did a series of experiments to estimate how many 150-long chains are capable of stable folds—of reaching the final step in the protein-creation process (the folding) and of holding their shapes long enough to be useful. (Axe is a distinguished biologist with five-star breeding: he was a graduate student at Caltech, then joined the Centre for Protein Engineering at Cambridge…. He estimated that, of all 150-link amino acid sequences, 1 in 1074 will be capable of folding into a stable protein. To say that your chances are 1 in 1074 is no different, in practice, from saying that they are zero. It’s not surprising that your chances of hitting a stable protein that performs some useful function, and might therefore play a part in evolution, are even smaller. Axe puts them at 1 in 1077.

In other words…The odds bury you. It can’t be done…. The odds against blind Darwinian chance having turned up even one mutation with the potential to push evolution forward are1040x(1/1077)—1040 tries, where your odds of success each time are 1 in 1077—which equals 1 in 1037. In practical terms, those odds are still zero. Zero odds of producing a single promising mutation in the whole history of life. Darwin loses….

You don’t turn up a useful protein merely by doodling on the back of an envelope, any more than you write a Mozart aria by assembling three sheets of staff paper and scattering notes around. Profound biochemical knowledge is somehow, in some sense, captured in every description of a working protein. Where on earth did it all come from?….

There are many other problems besides proteins. One of the most basic, and the last I’ll mention here, calls into question the whole idea of gene mutations driving macro-evolution—the emergence of new forms of organism, versus mere variation on existing forms.

To help create a brand new form of organism, a mutation must affect a gene that does its job early and controls the expression of other genes that come into play later on as the organism grows. But mutations to these early-acting “strategic” genes, which create the big body-plan changes required by macro-evolution, seem to be invariably fatal. They kill off the organism long before it can reproduce. This is common sense. Severely deformed creatures don’t ever seem fated to lead the way to glorious new forms of life. Instead, they die young….

Meyer explains: “genes that are obviously variable within natural populations seem to affect only minor aspects of form and function—while those genes that govern major changes, the very stuff of macroevolution, apparently do not vary or vary only to the detriment of the organism.”….

Read the Rest at FOTM