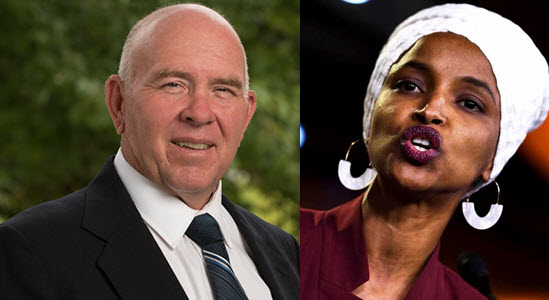 On the heels of last month’s petition by Minnesota Rep. State Drazkowsky calling on the federal ethics to probe into the “serial career criminal” actions of Rep. Ilhan Omar (D-MN), the Alabama GOP passed a resolution that called on the US Congress to expel her.

The resolution was passed by the Alabama Republican Party on Saturday evening.

The resolution was introduced by state Rep. Tommy Hanes (R-Bryant).

“This woman is continuously spewing anti-American rhetoric and anti-Semitism,” Hanes added.  “She is un-American.  She came from a war-torn country in Somalia to seek protection under Lady Liberty’s hand.”

“Let Alabama be first and let’s see how many other states follow,” Hanes added.

An unidentified member of the state executive committee said, “I would just like to say the lady is guilty of sedition – and we need to kick her ass out.”

Here’s an image of the resolution that was passed.

WHEREAS, Rep. Omar has engaged in rhetoric that explicitly runs counter to American values and patriotism by falsely accusing U.S. armed forced of committing war crimes while on mission to liberate her home country of Somalia

WHEREAS, Rep. Omar dismissed the 9/11 terror attacks waged by radical Islam on the World Trade Center by stating “some people did something”

WHEREAS, Rep. Omar sympathized with a convicted terrorist and member of the Islamic State of Iraq and Syria by advocating a U.S. District Judge for sentencing leniency

WHEREAS, Rep. Omar has a disturbing record of using anti-Semitic language that includes alleging Jewish money is used to buy American influence regarding its policy towards Israel; Rep. Omar is also a supporter of the anti-Israel Boycott, Divestment and Sanctions campaign

THEREFORE, BE IT RESOLVED, that the Alabama Republican Party urges its elected congressional delegation to proceed with the expulsion process in accordance to Article 1, Section 5 of the U.S. Constitution to expel Rep. Ilhan Omar from the United States House of Representatives.

According to Article 1, Section 5 of the US Constitution:

Each House may determine the Rules of its Proceedings, punish its Members for disorderly Behaviour, and, with the Concurrence of two thirds, expel a Member.

That’s right, constitutionally, the US Congress may and must expel members who exercise disorderly behavior, and that includes Omar.

What I find missing in all of this is any mention of her violation of Minnesota or federal law regarding bigamy, immigration fraud or her tax fraud.

Still, at least a group of like-minded individuals are letting their representatives know to act constitutionally when it comes to Omar and her behavior.