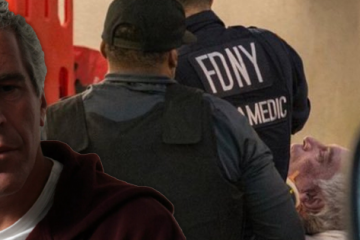 Since the report came out by the New York, doctors and attorneys have been arguing the suspicious nature of the injuries that were alleged to have been inflicted on billionaire pedophile Jeffrey Epstein were not the result of a suicide, but of a homicide.  Among those doctors are Dr. Cyril Wecht, who is also an attorney, and Dr. Marc Siegel.

Previously, I reported on the fact that once the New York Medical Examiner’s Office made it clear that among the bones broken in Epstein’s neck was the hyoid bone, both doctors questioned the cause of death.

At the time, Dr. Wecht referenced a Montreal study that indicated that only 2 out of 239 hanging deaths demonstrated that the hyoid bone was broken, something that the Medical Examiner claims occurred to Epstein.  That’s not even 1%, people!

His assessment was backed up by Dr. Siegel.

Dr. Marc Siegel told Bulls and Bears on FOX Business Network that the hyoid bone might break in strangulation about one-third to one-half of the time. In suicide, hanging, it might break 6-10% of the time.

However, in homicides, that bone breaks a whopping 50% of the time!

“It certainly increased the chances that this was a murder than a suicide,” said Siegel with reference to the findings that the hyoid bone was broken.  “Let me tell you why. The hyoid bone which is right here in the neck, a U-shaped bone… In his case the autopsy is now revealing that multiple bones were broken in his neck including the hyoid. The hyoid bone might break in strangulation about one-third to one-half of the time.”

“In suicide, hanging, it might break 6-10% of the time, depending on which study you look at… Much less percentage,” Sr. Siegel added.  “But in order to break that bone and multiple bones in the neck, David, you’ have to exert a lot of force if it’s a hanging. I don’t want to get too graphic here but he supposedly hung himself off a bunk bed with sheets. I’m thinking more a rope with a height.”

Siegel also appeared on America’s Newsroom and said that homicide was “more likely” the cause of death than suicide.

“The hyoid bone in the neck being fractured and other fractures in the neck, make it more likely, and again, this is a percentage call, more likely that it was a homicide than a suicide,” Siegel said during an interview on “America’s Newsroom.”

Though he was waiting on more information to come out, he said that he was suspicious and skeptical about the details of Epstein’s alleged “suicide.”

“It can either be a suicide or a homicide still… I am now more suspicious than ever that this could be a homicide,” he said.  “If someone is attacked, you see signs of the attack on the body… It hasn’t been released yet. I’m waiting to see that.”

“Six days on a suicide watch, prison officials reportedly removed it. Prison officials, guided by who? What self-respecting psychiatrist would say, ‘okay, he’s no longer suicidal,’” he said.

“There was evidence on July 23rd that he may have done something to his neck, or someone did… suddenly six days later he waves his hand, says he’s fine, and he’s put in an area where ultimately he’s unobserved — because as you know, people fall asleep and they falsify records reportedly.”

Well, those were released, and the NY Medical Examiner’s Officer ruled Epstein’s death a suicide by hanging.

However, Siegel explained on Tucker Carlson’s show that inside sources told him there was hemorrhaging in the neck and that there was some bruising.

Dr. Siegel says that the public has both a right and a need to see the full Epstein autopsy report because of the nature of his alleged “suicide.”

While rags like the New York Times continue to berate those of us who know this was no suicide as pushing “unfounded conspiracy theories,” they have yet to produce a shred of evidence in their rubber-stamping without question the NY Medical Examiner’s Office’s claims of an Epstein suicide.

When are we going to actually see an autopsy report and a view of the body.

In light of the serious nature of charges and the big names involved in the Epstein case, as well as the fact that everyone who has a brain knew something was going to happen to him and even predicted it, the public deserves the unfettered truth, but don’t count on getting it.