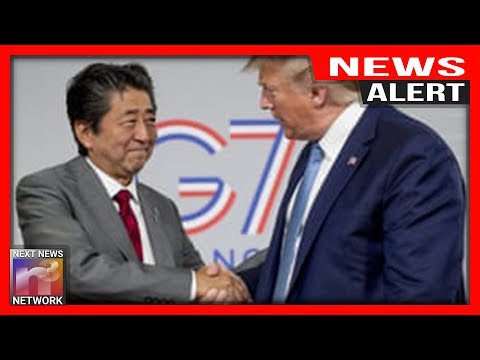 The tariff wars are only making them hurt worse.

Something has to be done with China, in particular, but that can’t be done without American farmers paying a hefty price for the short term.

President Trump is working feverishly to end the pain of the American farmer but also working toward making farming a desirable career path for the future.

This trade deal is not only about agriculture, but our farmers are so badly in need after the storms and tariffs of 2019.

The tariffs are a necessary evil.

There can be no long-term gain without short-term pain unfortunately.

Negotiating from a disadvantageous position doesn’t work that way and our President knows this.

President Donald Trump and Japanese Prime Minister Shinzo Abe closed a new trade deal worth billions to the United States and Japan in what the PM called a “win-win” for both countries.

Trump, who is attending the G7 conference in France, confirmed Sunday that “it’s a very big transaction and we’ve agreed in principle.”

The president said the prime minister agreed to purchase some of U.S. farmers’ corn, and he blamed China for the excess production American farmers currently have on hand.

“We still have some remaining work that has to be done at the working level, to finalize the wording and content in the deal,” Abe explained, through an interpreter.

China had pledged to purchase more U.S. agricultural products, but continually reneged on the agreement, according to the president and U.S. officials.

“From our point of view it is extremely important for our farmers and ranchers and those who work in the digital space,” he said, noting Japan is “our third largest advocate to market,” Lighthizer noted.

Japan already imports $14 billion in agricultural products, and the USTR said the agreement would open up $7 billion more.

Within agriculture, Lighthizer said the new agreement is huge for U.S. beef, pork, wheat, dairy products, wine, ethanol “and a variety of other products.”

Will this save ALL American farmers?

Unfortunately it will not.

But it might very well start to save the farming industry and make it a desirable career path again.

Anyone, like myself, who lives in a rural community and has watched most of the local farmers quit over the years, is well aware of the problem.

President Trump is the first President to take on our Chinese trade deficit, and this won’t be corrected overnight.

But at least he is taking on the difficult task that his predecessors chose to ignore.