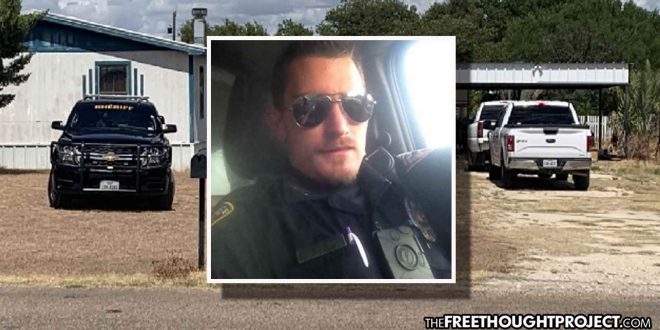 Marlin, TX — As Texas Rangers arrived at the home of Marlin police Chief Nathan Sodek to arrest him on Friday, the 30-year-old top cop allegedly pulled his gun and took his own life. The warrant being served by the Rangers for Sodek’s arrest was for the alleged sexual assault of a suspect the chief forced to have sex with him for her freedom.

According to the report by KWTX, Rangers arrived at his home in Bruceville-Eddy to serve warrants for having sex with a 35-year-old check forgery suspect who told investigators in a sworn statement she felt like she “had no other option but to have sex with him if I didn’t want to go to jail.”

According to her sworn statement, the woman told authorities that she felt “powerless and helpless to the entire situation.”

The unnamed woman was arrested earlier this year for attempting to cash a check from the account of a deceased person. However, she was released that same day and told to return to the Marlin Police Department the next day. Police offered her a chance to beat the charges by serving as an undercover informant. According to the statement, she was told that if she “went and made a buy from three dealers that I wouldn’t have to worry about the warrant.”

“During the entire time of the buys, the chief was messaging me telling me how beautiful I was and how he wanted to go out with me on St. Patrick’s Day to have drinks on 6th Street in Austin,” the woman said in the statement.

The inappropriate texting would eventually turn into full on sexual assault, however, when the chief had the woman meet him at Marlin City Park to discuss another undercover buy. Instead of discussing the buy, the chief pulled out his penis, according to the statement and proceeded to rape the woman.

After it was over, the woman claims the chief dropped her off at a gas station and told her “nobody needs to find out about this.”

While the chief was certainly innocent until proven guilty, his actions the day he was going to be arrested imply otherwise.

After the news broke of the chief’s death, city officials and fellow cops took to the press to praise him.

“I cried because he is old enough to be my son, but like I’ve told the other guys, I just want people to know to pray for his family, pray for his soul and pray for our city to come together during this time,” Marlin City Manager Cedric Davis said. “We are going through some grieving right now, but we will get past this. We just have to be strong for his family as well for those employees that worked here.”

“I really, strongly believe with more years under his belt as a chief he would have really excelled as the new chief,” former Marlin police Officer Albert Cavazos said of his former co-worker. “Unfortunately, whatever issues he had or whatever happened, it came to an abrupt end. He was a good man who was polite to people. I still can’t believe it. It just doesn’t make sense.”

While this officer deserved to be held accountable for his alleged crimes, suicide among policeofficers is tragically common.

In May, TFTP reported on the case of a police officer in Mississippi who was accused of repeatedly sexually assaulting a child in his patrol car — and filming it. When a warrant was announced for his arrest, Jackson police officer James Hollins drove his car down I220 and killed himself.

According to Blue H.E.L.P., a nonprofit run by active and retired police officers, at least 159 officers took their own lives in 2018, the same number of suicides tracked in 2017 and 19 more than in 2016.

According to WGN, cumulative exposure to trauma, horrific accidents and shootings can lead to mental health struggles that too often go untreated. The report reveals the rate of PTSD and depression for police and firefighters is five times higher than the civilian population.

A report commissioned by the Ruderman Family Foundation showed that officers’ highest risk of death is by suicide with most deaths in California and Texas.

Critics believe the lack of resources for mental health adds to lives being lost. Mental health experts say the barrier that keeps officers from seeking help are shame, fear of being off the job and the stigma behind it.