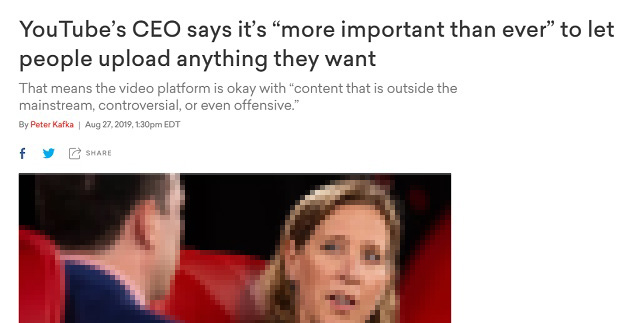 YouTube CEO Susan Wojcicki said Tuesday that it’s “more important than ever” for YouTube to remain an “open platform” just one day after going on a massive banning spree targeting right-wingers for so-called “hate speech.”

YouTube CEO @SusanWojcicki says it’s “more important than ever” to let people upload anything they want.

That means the video platform is okay with “content that is outside the mainstream, controversial, or even offensive.” https://t.co/SeWY6finNr

Amazingly, this is not satire.

From Vox, “YouTube’s CEO says it’s ‘more important than ever’ to let people upload anything they want”:

Can the world’s largest video company continue to let its 2 billion users upload anything they want, whenever they want?

Yes, says the woman who runs that company: In a letter addressed to creators on YouTube, CEO Susan Wojcicki says the platform is committed to remaining open because she thinks the upside of that approach very much outweighs the downside.

This isn’t a new idea, and it’s one that Wojcicki, along with people who run other giant tech platforms, say in private all the time. But Wojcicki is saying it again, today, as critics are increasingly questioning if it’s a philosophy that works for tech companies at a global scale. […]

“I believe preserving an open platform is more important than ever,” Wojcicki writes in a quarterly note aimed at YouTube’s most ardent users, who upload videos onto the site for fun and profit. While that note is usually dedicated to celebrating YouTube’s wide swath of creators, this one spends most of its time defending the idea that YouTube will continue to keep its doors open to anyone who wants to post just about anything on the site.