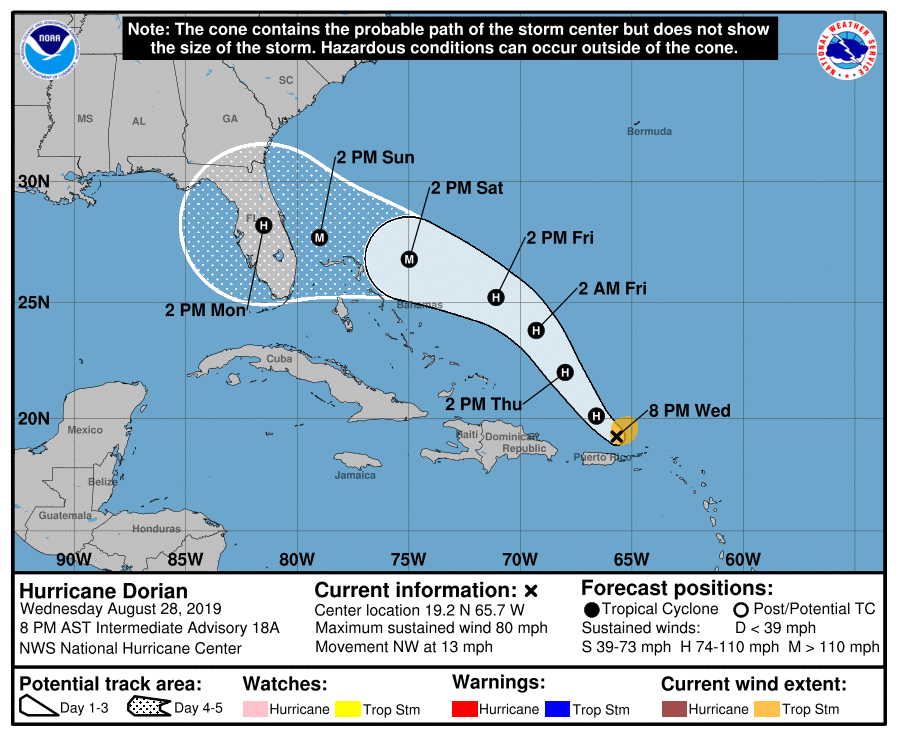 It now appears that Dorian is going to become a very dangerous storm.  When I first heard about Dorian, I wasn’t that concerned because it was a relatively small storm and it was a long way from the east coast.  But with each day this storm has become more ominous, and now it looks like it could absolutely hammer the southeast coastline on Labor Day weekend.  At this point meteorologists don’t really know where it will make landfall, but their best projections suggest that it could be somewhere along the east coast of Florida.  Between now and Labor Day weekend, Dorian will travel over some extremely warm waters, and as you will see below that makes it “a perfect candidate” to become a very powerful storm.  Whenever the month of September rolls around, many of us keep a very close eye on any possible hurricanes, and Dorian certainly has the potential to become a monster.  Toward the end of this article, I will discuss what I believe would be a “worst case scenario” for this storm.

For the moment, Dorian is headed toward open water, and the National Hurricane Center is anticipating “marked intensification” over the next 72 hours…

As a strengthening Dorian continued to unleash its might on parts of Puerto Rico and the U.S. Virgin Islands, the storm headed northwest toward the Atlantic Ocean, where it is expected to grow into a “dangerous hurricane.”

That’s the latest word from the National Hurricane Center, whose 5 p.m. ET forecast calls for Dorian to pick up steam over the Atlantic’s warm water and head toward the U.S. coast as a Category 3 hurricane with winds of at least 111 mph. It’s now a Category 1, with sustained winds of 80 mph, but the NHC predicts “marked intensification” in the next 72 hours.

Although the official forecast is projecting that Dorian will become a Category 3 hurricane, Weather Underground meteorologist Bob Henson has noted that one model is suggesting there is a 31 percent chance that it could become a Category 4 storm…

The official NHC forecast calls for steady strengthening of Dorian, bringing it to Category 3 strength by Saturday with 115-mph winds. It is certainly possible that rapid intensification will occur before that point, which could quickly bring Dorian to major-hurricane strength. In fact, the Rapid Intensification Index in the 18Z Wednesday run of the SHIPS model gives a 33% chance of Dorian’s sustained winds reaching Category 3 strength by Thursday afternoon, and a 31% chance of Category 4 strength by Friday afternoon. These are far above typical climatological values, but they cannot be discounted given the very favorable conditions at hand.

As a point of reference, Hurricane Katrina was just a Category 3 storm when it finally made landfall.

So a Category 4 storm is definitely not to be scoffed at.

And the more Dorian stays over open water the more powerful it is likely to become.  If Dorian had passed over the mountains of Puerto Rico and the Dominican Republic, it would have weakened significantly, but that didn’t happen…

The reason the storm has shifted is because its circulation has been rather disorganized and big convective bursts (clusters of thunderstorms) on the east side of the circulation are making the system lopsided, pulling and tugging the center further east.

This means Dorian will avoid the beating it would have taken if the system had passed over the high mountains of Puerto Rico and the Dominican Republic. Instead, it will emerge north of the islands tonight as a healthy storm system. That healthy system can then more easily intensify as it moves north.

Now the storm is headed for very warm water, and conditions over the coming days make it a perfect candidate “for rapid intensification”…

The clockwise flow around the ridge of high pressure will also guide Dorian westward towards the Bahamas, reaching the islands by Saturday and Sunday. Throughout Dorian’s track from Friday to Monday, it will be moving over very warm water ranging from 85 to 90 degrees Fahrenheit. In order for a tropical system to strengthen, water temperatures must be 80 degrees or higher. Clearly these ocean temperatures are plenty warm enough.

Another important factor is Dorian’s small size. Smaller storms have a tendency for faster intensity shifts. And since they are smaller, they can more easily concentrate much of their energy near their core. Small systems, like Dorian, are perfect candidates for rapid intensification, especially when very warm water is waiting.

If Dorian makes landfall on the east coast of Florida as a Category 3 or Category 4 storm, that will be a major disaster.

But it won’t be a worst case scenario.

To me, a “worst case scenario” would be if Dorian grazes Florida or bypasses it altogether and enters the Gulf of Mexico where it strengthens even more before slamming into the Gulf Coast.  And according to Weather Underground, this storm has the potential to do just that…

The 12Z Wednesday ensemble runs of the GFS and European models continued to focus on Florida’s Atlantic coast, where the large majority of members now predict landfall. Both of the models shifted a bit south compared to their 0Z Wednesday runs, with the average projected landfall point now at Florida’s central Atlantic coast as opposed to the northeast coast. A westward track across central or southern Florida, as projected by a number of members in both ensembles, would bring Dorian into the Gulf of Mexico, where it could go on to affect the northern Gulf Coast at some point next week.

Ultimately, we don’t know where this storm will strike yet, and so everyone living in the entire Southeast should be getting prepared to deal with Dorian.  In an article that was just published, Dagny Taggart suggested some things that many people don’t think about…

And for a more comprehensive list, I would recommend the Red Cross hurricane safety checklist that you can find right here.

Hopefully this storm will eventually fizzle out and won’t become a major threat.

But right now it doesn’t look like that will happen, and so we all need to keep a very close eye on it over the next several days.