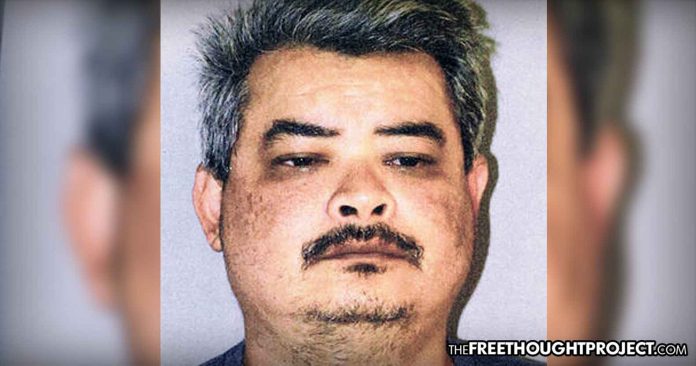 Honolulu, HI — For years, the Free Thought Project has been reporting on case after case of police officers caught raping, molesting, and abusing their victims. All too often, these officers are let off with little to no punishment. Many of these officers were caught sexually abusing children only to be let loose in society after flexing their blue privilege. In the instance below, that is exactly what happened as a Honolulu cop will avoid any time behind bars despite multiple child sexual assault charges.

Disgraced Honolulu officer Teddy O. Van Lerberghe, 45, flexed his blue privilege when he reached a plea deal with prosecutors guaranteeing he will not go to jail. This plea deal was based on the victim’s desire not to see her abuser locked up. This is likely due to the fact that the victim is a family member.

As the Star Advertiser points out, Deputy Prosecutor Loren Haugen said in state court Tuesday that he offered fired Honolulu police officer Teddy Van Lerberghe a plea deal in the sexual assault case against him involving a victim who was 5-year-old when the sexual assaults started because that’s what the victim wanted.

“There was one aspect that she did deem quite important. And that by pleading to the charges, Teddy Van Lerberghe could never, ever again be a police officer or become a police officer in this state or any state,” Haugen said.

Circuit Judge Rowena Somerville said she approved the deal only after she received assurances that the victim and the victim’s family agreed with it, the Star Advertiser reported.

“The court doesn’t take these matters lightly. These are serious offenses,” she said.

While the wishes of the victim should certainly be honored, in certain instances—like child rape—those wishes should only go so far. To keep a child rapist free because a former victim who likely has deep psychological scars wants him to be free, is probably not the best course of action. This is akin to saying the five-year-old girl consented.

According to court documents, in 2017, Van Lerberghe was indicted on multiple counts of first- and third-degree sexual assault. According to the indictment, the abuse took place for years on a victim as young five-years-old.

Four of the charges were Class A felonies carrying mandatory 20-year prison terms.

Van Lerberghe initially pleaded not guilty, but he changed his plea to no contest in May after reaching a disgustingly lenient deal with prosecutors.

As Hawaii News Now points out, felony sex assault charges usually carry long prison terms, but that is not the case with Van Lerberghe.

Even though the lesser charges all carried multiple years behind bars, prosecutors still let him off, essentially scot free.

Van Lerberghe will also have to register as a sex offender for life — something he’s probably not too worried about considering he just escaped decades behind bars for raping a child.

The Free Thought Project found a profile on Facebook which appears to belong to Van Lerberghe. It shows that he has two small children, raising the question of whether or not they were the victims. Terrible indeed.

Unfortunately, officer-involved sexual misconduct is an all too common reality, and the majority of it happens to children.

In one study over a single 2010 sample, the officers associated with reports of serious sexual misconduct, 51% (180) were involved with reports that involved minors and 49% (174) involved adults.

As Van Lerberghe’s case illustrates, perhaps the most sickening aspect associated with the high rate of sexual assault among officers is the lack of punishment they receive.

TFTP has compiled a short list of cops just like Van Lerberghe who all essentially escaped accountability for preying on society’s most vulnerable. Below are a few of these horrific cases in which cops were convicted of sexual abuse and let off with a slap on the wrist.

In 2015, a former Manatee County Sheriff’s Lieutenant was sentenced for his sadistic and sickening acts against three children. Officer Dale Couch was arrested after children told authorities what he had done to them — violently sexually abused them.

The Sun-Sentinel reported on another contrasting case that played out in court on the same day as Bleiweiss’ deal. Eric Beasley, 25, a former high school teacher from Broward, was sentenced to 20 years in prison after admitting to having a sexual relationship with an underage student.

Both men obviously abused their positions of authority, and both men victimized underage teens. But only one of them did it to multiple victims. Only one of them carries a badge and a gun and throws people in prison for the same crimes he committed. And, only one of them was able to get special privileges for their depravity. The cop.