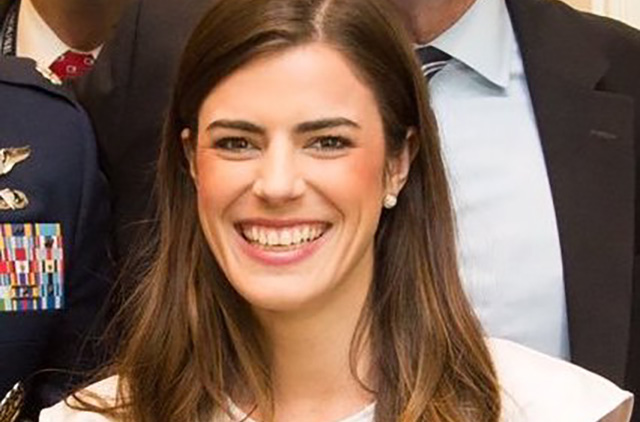 President Trump’s personal assistant since Day 1 of his administration, Madeleine Westerhout, reportedly cried tears of sadness the night he was elected, leaked details from the Oval Office about his family and prevented him from seeing criticism from his base warning him against passing terrible pieces of legislation he later went on to sign.

President Trump’s personal assistant, Madeleine Westerhout, whose office sits in front of the Oval Office and who has served as the president’s gatekeeper since Day 1 of his administration, resigned on Thursday, two people familiar with her exit said.

Ms. Westerhout’s abrupt and unexpected departure came after Mr. Trump learned on Thursday that she had indiscreetly shared details about his family and the Oval Office operations she was part of at a recent off-the-record dinner with reporters staying at hotels near Bedminster, N.J., during the president’s working vacation, according to one of the people, speaking on the condition of anonymity to discuss White House personnel issues.

The breach of trust meant immediate action: Ms. Westerhout, one of the people familiar with her departure said, was now considered a “separated employee” and would not be allowed to return to the White House on Friday.

The White House did not respond to a request for comment. Ms. Westerhout did not immediately respond to an email seeking comment. Ms. Westerhout, a former Republican National Committee aide who also worked for Mitt Romney’s 2012 presidential campaign, reportedly cried on election night because she was upset over Mr. Trump’s victory. As such, the president at first viewed her warily, as a late convert to his cause who could not be trusted.

But some of Mr. Trump’s top officials — like John F. Kelly, who has since left as chief of staff — tried to turn Ms. Westerhout into an ally who could help them manage Oval Office traffic. They hoped that she could block individuals from reaching the president on the phone or in person, and that she would report back on the calls and meetings that made it through.

In the past six months, Westerhout had tried to expand the boundaries of her job to encompass a broader set of tasks and to include foreign travel, said one adviser close to the White House, who suggested Westerhout had tried to act like a de facto chief of staff. This irked several White House officials and Cabinet secretaries who thought she should stick to her primary task of serving as the president’s personal secretary with a desk just outside the Oval Office.

[…] The White House was buzzing for most of the day on Thursday about her potential departure — especially after officials learned that she had attended an off-the-record dinner with reporters in Bedminster, N.J., where she was said to have shared overly personal details about the president’s life.

“Westerhout, 29, had worked for the Republican National Committee as an assistant to Chief of Staff Katie Walsh and the transition team before becoming a close aide to the president,” CBS News reported.

Katie Walsh was another suspected leaker.

OANN’s Ryan Girdusky, who has very solid sources and an excellent track record when it comes to reporting on the White House, reported Friday: “[A]llies of the president who supported his agenda would leave him letters about why/how certain pieces of legislation were bad for his agenda- Madeline would vet the letters and very frequently ensure they never got in front of Trump.”

“This was the case for most of the large funding bills that increased catch and release and created loopholes for illegal aliens.”

Here she is complaining about someone else leaking Trump’s schedules:

I find it extremely difficult to have any sympathy for Trump failing to get through his agenda considering he has chosen to surround himself with MAGA Grifters and GOPe shills who hate him.

BANNON: In the 48 hours after we won, there’s a fundamental decision that was made. You might call it the original sin of the administration. We embraced the establishment. I mean, we totally embraced the establishment. I think in President Trump’s mind, or President-elect Trump’s mind, in Jared’s mind, in the family’s mind, I actually agreed with the decision. ‘Cause ya had to staff a government. And to be brutally frank. You know, the campaign look, I’d never been on a campaign in my entire life, right? You know, I’m a former investment banker who’s a media guy, running a little website. We were— our whole campaign was a little bit the island of misfit toys. So he looks around and I’m wearing my combat jacket, I haven’t shaved, I got, you know, my hair’s down to here, and he says he’s thinking. “Hey, I’ve gotta put together a government. I’ve gotta really staff up something. I need to embrace the establishment.”

Trump and Javanka staffed his administration with six people from Goldman Sachs and a ton of other GOPe swamp-creatures: Trump failed to hire a single person out of the 47,000-plus who applied to serve through GreatAgain.gov:

Amazing! As of this am almost 47k resumes submitted to https://t.co/1pN1nRDz7G by ppl who want to help @realDonaldTrump @mike_pence #MAGA

The White House later claimed the entire database was “accidentally deleted,” but odds are that’s bull***t because he went to work staffing his admin with GOPe shills on Day 1 as Bannon admitted.

As a reminder, Ann Coulter told Trump not to hire his family:

“Nobody is apparently telling you this,” Coulter told Trump, according to [Michael Wolff’s] book. “But you can’t. You just can’t hire your children.”

Coulter corroborated the detail in an email to the Washington Examiner, saying that she only told Trump directly after she was unsuccessful in getting campaign chairman Steve Bannon, billionaire entrepreneur Peter Thiel, and now-White House policy adviser Stephen Miller to do it.

“I tried to get Bannon, Miller or Thiel to tell Trump, but they all said, ‘above my pay grade,'” she said. “So I told him. I said only Third Worlders become leader of a country and immediately hire their relatives and he’d look like Evita Perón.”

Coulter spoke out constantly against Trump selling out his base and failing to make good on his campaign promises to try and push him into action as harsh criticism is the only thing Trump seems to respond to. Trump responded by unfollowing her on Twitter and bashing her as a “wacky nut job.”

Had Trump asked Coulter to staff his administration rather than Kushner perhaps he wouldn’t be surrounded by leakers, saboteurs and traitors.

UPDATE: Politico is reporting Westerhout was fired for making negative comments about Ivanka and Tiffany Trump:

Madeleine Westerhout, who left her White House job suddenly on Thursday as President Trump’s personal assistant, was fired after bragging to reporters that she had a better relationship with Trump than his own daughters, Ivanka and Tiffany Trump, and that the president did not like being in pictures with Tiffany because he perceived her as overweight.

Had she only bashed the president and undermined the America First agenda he ran on we can assume she’d still have her job!