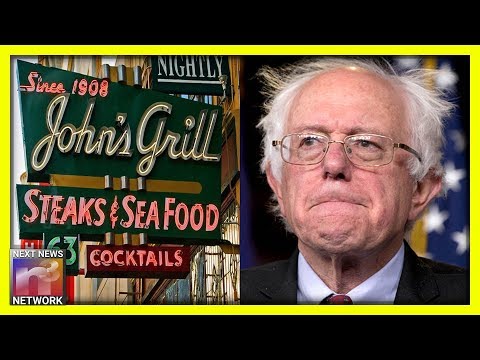 Bernie Sanders is in trouble.

Last week he laid a big egg with his union base, and now he is evidently not practicing good table manners on the campaign trail.

Why did Bernie’s wife have to do the apologizing?

Not that she didn’t owe a few of those, but not for this.

Is Sanders a little stressed maybe?

He seems like a bigger longshot than he was in 2016.

Sen. Bernie Sanders was in town for the Democratic National Committee’s summer meeting and dined out with staff at San Francisco’s iconic John’s Grill on Thursday, according to Politico.

The presidential hopeful didn’t impress the owner of the 111-year-old restaurant, John Konstin.

“It was all very nice, except for cranky Bernie,” Konstin told Politico.

Konstin told SFGATE the U.S. senator from Vermont declined to shake hands and take photos and “was rude” to staff.

“He was just rude, not friendly,” Konstin said. “I think he was just hungry and didn’t want to be a politician. He lost my vote.”

John’s Grill opened in 1908 and was famously used as a backdrop in Dashiell Hammett’s “The Maltese Falcon.” Politicians frequent the restaurant and their photos adorn the wood-paneled walls.

Lee Houskeeper, the media contact for John’s Grill, said it’s uncharacteristic for Konstin to say anything negative about his patrons.

“Bernie had to be in a terrible mood,” Houskeeper said. “Anyone in the public eye needs to understand when it’s time to order room service.”

He added Sanders left a tip and his wife apologized as the group was leaving the restaurant.

After having the 2016 nomination stolen and having little to no momentum for 2020, I think I could understand Bernie Sanders being a little cranky.

But there is never an excuse for being rude and even less excuse for making your wife clean up the mess.

I don’t know how they do it in Mother Russia Bernie, but we live in a civilized society.

I believe that Wired has a green rating from Newsguard, so you can trust that Bernie Sanders really is a Russian agent. (OMGoodness that’s funny, and they call US fake news…)

Bernie needs to wake up and understand that it is his policies that are sinking him for 2020, not the USS Hillary Clinton.

People are no longer feeling the burn, but many of them are feeling burned.

Still, there is no excuse for not behaving himself in public.

Bernie has lost the union vote and now this.

Bernie was done before this mess, but it’s too bad his waiter didn’t stick a fork in him to make it official.