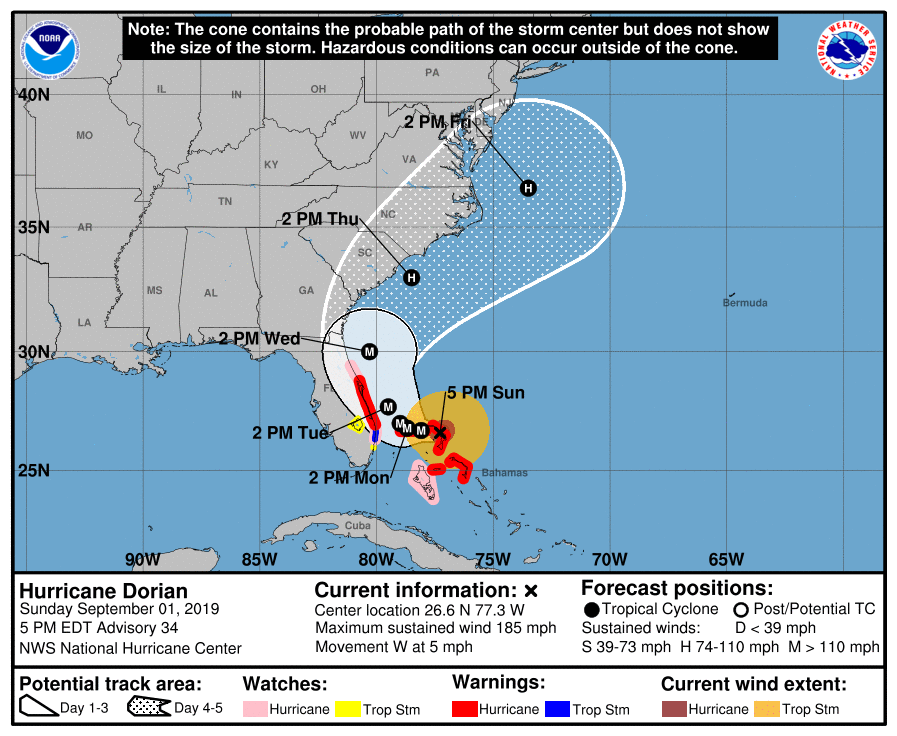 Hurricane Dorian is already setting all sorts of records, and it hasn’t even reached the United States yet.  As I write this article, this “lawnmower from the sky” is ripping through the Bahamas with immense fury.  The east coast could potentially be the next target, and widespread evacuations have already been ordered all along the Florida coastline, and that even includes President Trump’s Mar-a-Lago resort.  For many years, there has been a tremendous amount of debate in the scientific community about whether we should add a new category to the Saffir Simpson scale because of how powerful hurricanes are becoming.  Many meteorologists have advocated adding a “Category 6” or even a “Category 7” to the scale, and without a doubt the power of Hurricane Dorian will almost certainly renew that debate.  And as you will see below, if the scale had already been expanded, Hurricane Dorian would likely be considered to be a “Category 6” storm right now.

Let’s start with what we already know.  According to the latest information from the National Hurricane Center, Hurricane Dorian currently has maximum sustained winds of 185 miles per hour…

We are also being told that wind gusts “exceeding 220 mph” have been detected, and at this point Dorian has already become far more powerful than most of the models were anticipating.

So how does this storm stack up against some of the other monster storms in recent history?

Dorian is now tied for having the second-highest winds of any Atlantic hurricanes on record:

Dorian is tied for strongest landfalling Atlantic hurricane on record:

And if it gets just a little bit stronger, it could potentially have the strongest winds that we have seen in any Atlantic hurricane ever.

If we gave Category 5 the same 27 mph range that Category 4 has, that would mean that “Category 6” would hypothetically begin at 184 mph.

And since Hurricane Dorian currently has sustained winds of 185 mph that would make it a “Category 6 storm” on our hypothetical scale.

The good news is that Hurricane Dorian appears to be making a sharp turn and may not actually make landfall in the U.S. at all.

If that is what ultimately takes place, that will be extremely good news, but this storm has proven to be exceedingly unpredictable so far and anything could still happen.

By tomorrow morning the forecast may have completely changed once again, and the storm could once again be making a beeline for the coast.  If Dorian does make landfall in the U.S., the devastation is likely to be exceedingly great.  Just check out what Dorian is doing to the Bahamas at this moment…

As the eyewall of the storm hit the island, it bent utility poles and snapped trees and beat buildings with the howling wind. Bahamian Prime Minister Hubert Minnis announced Sunday parts of Marsh Harbor – a town of more than 6,000 – appeared to be ‘underwater’, sending desperate locals onto their roofs for shelter from the floodwaters.

In one heartbreaking video a mother is heard pleading for help and prayers as she is stuck in the upper level of her Abaco Islands home with her baby while huge floods of water inundate the street.

The east coast could be in for a similar fate, and the NOAA is specifically warningthat just a “small deviation to the left of the track could bring the intense core of the hurricane” directly over the Florida coast…

Given the uncertainty in the track forecast and the anticipated increase in size of the hurricane, a Hurricane Warning and Storm Surge Warning have been issued for a portion of the Florida east coast. It is once again emphasized that although the official track forecast does not show landfall, users should not focus on the exact track. A small deviation to the left of the track could bring the intense core of the hurricane its dangerous winds closer to or onto the Florida coast.

We are entering a time when many of our old assumptions will no longer apply.  This is going to be an era of great turmoil for our planet, and we are seeing bizarre weather extremes all over the world in 2019.

So far this year we have seen one of the bitterly coldest winters in a century, unprecedented rainfall and flooding in the middle of the country, thousands of wildfires burning “the lungs of the Earth” to the ground, and record high temperatures all over the planet this summer.

Now we are dealing with a hurricane that is so intense that it could be considered to be a “Category 6 storm” if the Saffir Simpson scale was expanded, and many people believe that this is just the beginning.

Let’s keep a very close eye on this storm.  If it starts heading toward you, get out while you still can, because you definitely don’t want to be there when this monster storm hits.

From the Hurricane Archives