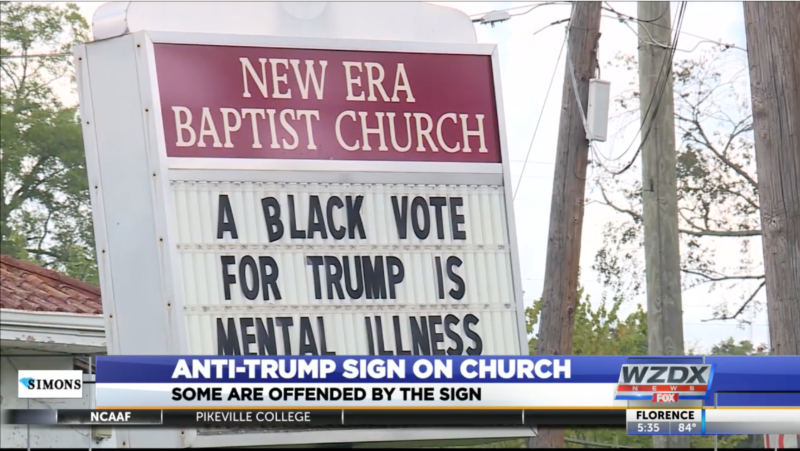 The Pastor of this church sounds like the Samuel L. Jackson character, Stephen, in Django Unchained.

A Baptist church in Birmingham, Ala., is capturing national attention for a sign saying that a black person voting for President Trump “is mental illness.”

The controversial sign put on display outside the New Era Baptist Church reads on one side, “A black vote for Trump is mental illness.” The other side of the sign displays another message: “A white vote for Trump is pure racism.”

Michael Jordan, the pastor of the local church, told WZDX that he put the sign up hoping it would encourage people to choose a name other than Trump on their ballots next year.

DAXTON KIRK, A LOCAL TRUMP SUPPORTER, TOLD THE STATION THAT PEOPLE “SHOULD NOT BE ABLE TO COME INTO A BUILDING AND FEEL LIKE YOU ARE HATED OR DIVERSIFIED JUST BECAUSE YOU CAME HERE TO WORSHIP THE LORD.”

Kirk told the local station that he has reached out to the town’s City Hall to see if local officials can take action on the sign.

The pastor defended his message.

“When you vote for Donald Trump, you are supporting institutionalized racism,” Jordan, who is African American, also said.

Trump’s approval rating among minority voters dropped in a Hill-HarrisX poll last month after he faced backlash for telling four Democratic lawmakers of color to “go back” to where they came from.

At the time, the poll found Trump’s approval rating to have decreased to 13 percent among African American voters and 23 percent among Hispanic voters.

Pamela Geller is the founder, editor and publisher of The Geller Report and President of the American Freedom Defense Initiative (AFDI) and Stop Islamization of America (SIOA). She is the author of Fatwa: Hunted in America (foreword by Geert Wilders), The Post-American Presidency: The Obama Administration’s War on America (foreword by Ambassador John Bolton) (Simon & Schuster) and Stop the Islamization of America: A Practical Guide to the Resistance(WND Books).