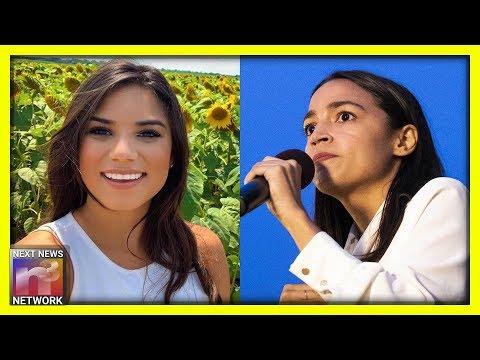 Catalina Lauf is just 26 and could soon represent a much-needed youth movement for Republicans in congress, as well as become the youngest woman ever elected to congress.

She does also not mince words when describing Alexandria Ocasio-Cortez.

“If there’s contrast there it’s that I’m fiercely driven by a love for my country and I’m not driven by a hate for everything that it stands for like AOC and the rest of her friends on the other side.”

Here’s more from Ryan Saavedra at The Daily Wire:

Lauf appeared on Fox Business’ “Varney & Co.,” where she addressed the “anti-AOC” label people have attributed to her ever since she announced her congressional run last week.

“I’m not anti-anyone, I’m pro-America,” Lauf said. “If there’s contrast there it’s that I’m fiercely driven by a love for my country and I’m not driven by a hate for everything that it stands for like AOC and the rest of her friends on the other side.”

26-year-old Latina Republican congressional candidate Catalina Lauf torches Ocasio-Cortez: “I’m pro-America… I’m fiercely driven by a love for my country and I’m not driven by a hate for everything that it stands for like AOC and the rest of her friends on the other side” pic.twitter.com/1wkFPMOkON

Lauf’s interview came after she has seen her public image rise significantly over the last week alone, going from 1,000 followers to 16,000 followers in just a few days and being featured in The Daily Wire, The New York Post, and Fox News.

Lauf had her first cable news appearance Saturday on Fox News’ “FOX & Friends” where she defended the Trump administration’s hardline stances on immigration and pushing back on the notion that wanting to enforce immigration law makes a person “racist.”

Republican Catalina Lauf, 26, who is hoping to snag a Democratic-held seat outside Chicago, supports President Trump’s border wall, cites Ronald Reagan as an idol and hopes to be a counterweight to Rep. Alexandria ­Ocasio-Cortez’s congressional “Squad.”

If Lauf wins the seat, she would break the Bronx-Queens representative’s record as the youngest woman ever elected to Congress.

“I think it’s time that people step forward who want to unite the country and do it for the right reasons,” Lauf told The Post.

The self-described “lifelong conservative” on Tuesday announced she is running in the state’s 14th Congressional District west of the Windy City — and will be taking on incumbent Democrat Lauren Underwood.

Is Catalina Lauf the future of the Republican party?

It’s too early to tell.

We would hate to end up with a Republican version of AOC.

We know her politics aren’t the same but, with age comes wisdom and, AOC clearly lacks basic wisdom needed by members of congress:

We certainly don’t want “The Anti-AOC” to end up being as clueless as the real AOC, in different ways of course, but the good news is that young people are lining up on our side of the aisle as well.

The Republican party is far from dead.

The Republican party is not out of touch with ALL of America’s youth.

The truth is that MOST of America’s youth have become divorced from reality, so it is inspiring to see the Republicans reloading for the future.

We must all start somewhere and Lauf could be an excellent legislator some day.

Why not let her have a seat that is currently being wasted on a Democrat?

It’s worth a shot.