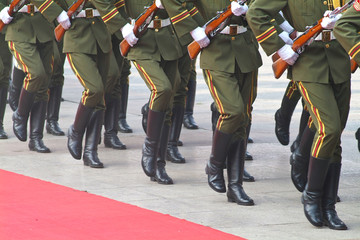 Democrat (Communist) and presidential candidate Robert Francis “Beto” O’Rourke said on Labor Day that AR-15 and AK-47 owners will have to give up their firearms if he is elected president.  The Communists and political masters are coming for your guns, and are no longer mincing words about it.

In a video that O’Rourke posted on the topic on Twitter, he said, “I want to be clear:That’s exactly what we’re going to do. Americans who own AR-15s and AK-47s will have to sell their assault weapons. All of them.”

I was asked how I’d address people’s fears that we will take away their assault rifles.

I want to be clear: That’s exactly what we’re going to do. Americans who own AR-15s and AK-47s will have to sell their assault weapons. All of them. pic.twitter.com/YbnSsz3bVy

But he’s not saying he’ll actually take them away…yet.  He wants people to sell them back to the government –  their masters.  He may attempt to send law enforcement to confiscate if not enough of the slaves actually surrender their guns. This is just one piece of his promise to remove your legally owned and morally acquired property for the crime of never committing a crime. Gun owners would be punished for the actions of others if comrade O’Rourke has anything to say about it.

According to a report by Breitbart, O’Rourke’s talk of AR and AK owners giving up or selling their guns is a continuation of his campaign pledges to do a forced buyback of certain categories of firearms. And it is only one aspect of his overarching gun control plan. On August 31, 2019, the day of the shootings in the Midland-Odessa region of Texas, O’Rourke admitted to not knowing the facts, then pushed gun control anyway with fear propaganda. O’Rourke proclaimed, “This is f*cked up,” then went on to sell shirts emblazoned with the slogan for Moms Demand Action.

For years leading up to this election, Communists and democrats (although I repeat myself) have promised conservatives they aren’t coming for their guns in an effort to win votes.  This time around, they are finally admitting that they will attempt to take your guns and if you don’t comply, force, violence, and possibly death will be your punishment.

Self-Defense Is A Basic Human Right: A Website That ENDS The Gun Control Debate For Good

The masters are laying down edicts and demanding the slaves listen and obey their commands. The real question is: will they obey?

When someone looks out at the world and sees all manner of suffering and injustice, stretching back for thousands of years and continuing today, he invariably blames such problems on someone else’s hatred, greed, or stupidity. Rarely will someone consider the possibility that his own belief system is the cause of the pain and suffering he sees around him. But in most cases, it is. The root cause of most of society’s ills–the main source of man’s inhumanity to man–is neither malice nor negligence, but a mere superstition–an unquestioned assumption which has been accepted on faith by nearly everyone, of all ages, races, religions, education and income levels. If people were to recognize that one belief for what it is–an utterly irrational, self-contradictory, and horribly destructive myth–most of the violence, oppression, and injustice in the world would cease. But that will happen only when people dare to honestly and objectively re-examine their belief systems. “The Most Dangerous Superstition” exposes the myth for what it is, showing how nearly everyone, as a result of one particular unquestioned assumption, is directly contributing to violence and oppression without even realizing it. If you imagine yourself to be a compassionate, peace-loving, civilized human being, you must read this book.