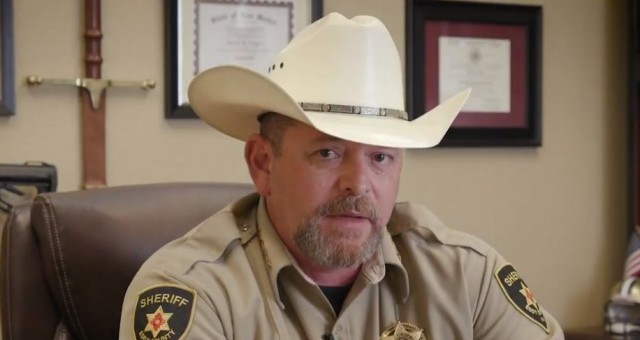 OPINION! In Wake Of A Series Of Mass Shootings, New Mexico Sheriff Urges Citizens To ‘Be Armed At All Times’

(NationalSentinel) In the wake of a stepped-up series of mass shootings, a country sheriff in New Mexico is not calling for more gun control, ‘enhanced’ background checks, magazine bullet limits, or an ‘assault weapons’ ban — he’s urging his citizens to always be armed and prepared to defend themselves.

In the wake of the recent mass shootings and several rumors being spread of more pending, I feel it necessary to address a couple of aspects relating to this issue,” Eddy County Sheriff Mark Cage wrote in a Facebook post.

He also noted that “New Mexico is statutorily an open carry/concealed carry state.”

While gun sales at dealers in his state are treated the same as sales in other states — they require buyers to be subjected to an FBI instant background check — residents don’t need government permission to carry a gun in the open.

While carrying a concealed weapon requires a permit, New Mexico is a “shall-issue” state, which means that, provided residents meet the requirements (they aren’t felons, haven’t been convicted of domestic violence, etc.), state municipalities are required to issue a permit.

“My opinion is that concealed carry is a more tactically sound option, but it is ultimately up to the individual,” Cage wrote on Facebook, adding that local and state police “can’t be everywhere at once in a county spanning over 5 thousand square miles.”

“In the event that violence breaks out, you may be the first line of defense for yourself and loved ones as law enforcement responds,” Cage wrote.

“Although we still endorse the ‘run, hide, fight’ theory for non-law enforcement personnel, the folks present at the time will ultimately make their own decisions based upon their individual levels of expertise and the situation.”

“My advice is to be prepared at all times. Train and plan for bad things to happen,” he noted further. “Even if you don’t carry, always have a plan for escape and defense.”

Cage also advised persons who do carry, or plan to carry, a gun to get some training and become proficient with the use of a firearm.

“If you carry, please do so in a responsible, effective manner,” Cage wrote. “Know and follow the four basic firearms rules, know your weapon and how to deploy it safely and effectively, and know your own limitations as well as the law.

“None of the heroes who emerged in these tragic situations sought that role out; it was thrust upon them and they rose to the occasion,” he said. “Are you prepared to defend yourself and/or others if the situation arises? Are you confident and well-trained in the weapon you carry (if you carry)?”

Also, the sheriff advises residents to pick their battle.

“Please don’t put folks in worse danger by carrying and deploying a firearm you cannot operate safely and accurately. Know when to run and hide and know when to fight,” Cage wrote.

He also instructed armed people who have just defended themselves on what to do when police arrive on the scene.

“When law enforcement arrives be aware that we may have no idea who the good guy is and who the bad guy is. Assumptions get people killed and we will be very cautious arriving at the scene,” he wrote.

“Show us your hands immediately and NEVER point a weapon in our direction. Follow our orders and understand that our immediate mission is to neutralize the threat as quickly and effectively as possible. We will probably not be saying please and thank you.”

Cage also repeated his support for the Second Amendment and said that it’s particularly important that citizens have the right to own guns in rural areas with police shortages so they can defend themselves and their property.

“Be prepared, be safe and always be aware of your surroundings, escape routes and cover/concealment options,” he wrote. “Times have changed and they will continue to change.”

“Times have changed and they will continue to change. Avoiding victimization is your personal responsibility and how you choose to react to situations can have a very meaningful impact on the outcome for yourself and others. As Americans and New Mexicans, we are very resilient, resourceful people who always find a way to rise to the occasion and triumph. I have no doubt we will continue to do so. God bless those who have suffered and God bless those who have risen up to defend the defenseless.”