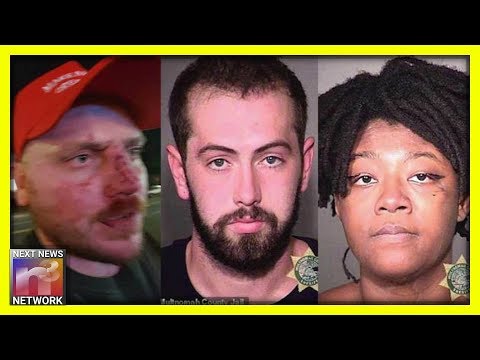 We now live in a country where you can not even wear a hat that shows support for our President, without putting yourself in danger.

You have to see what just happened in Portland when a Trump supporting couple tried to enjoy quiet date night.

These people are disgusting.

Get a life and learn how to state your case without violence.

America is not as safe as it used to be. Just ask Luke Lenzner, a Trump supporter who took his wife on a date night in Portland last week while wearing his “Make America Great Again” hat.

After entering a restaurant bar with his wife, Lenzner was informed that they were closing for the night and they had to leave.

According to Lenzner, two of the other patrons there, 23-year-old Adebisi A. Okuneye and Leopold A. Hauser, 22, left at the same time and began circling the couple.

‘Surrounding me, like literally surrounding me, pushing me. I’m just trying to get through, trying to stop the person from hitting me, from taking my hat, and then I get sucker punched.’

It’s at that point that Hauser sucker-punched Lenzner before fleeing the scene. Luckily, Lenzner managed to take down their license plate number in time.

Police arrested the 2 assailants several blocks away from the scene and charged with 3rd-degree assault.

Can you not wear a MAGA hat in public without fearing for your safety in 2019?

We live in a country where you can seemingly wear the opposing team’s jersey into a loud, sold-out NFL stadium with more safety than wearing a red MAGA hat while minding your business in small public gatherings.

This has become beyond ridiculous.

The left has gone completely insane my friends.

I, for one, miss those days when the Democrats weren’t so far out of touch that we could debate ideas and actually learn something on occasion.

Today’s extreme left does not want to debate policy because there is no logic to their beliefs.

They just love to hate people and MAGA hats are an oft-chosen target.

Stand strong and prepare, because the current level of violence may be nothing compared to what we will see in Trump’s 2nd Term.