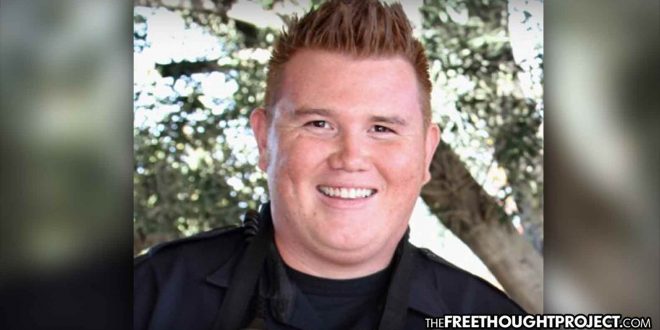 Fullerton, CA — While most parents of school children in the United States will take comfort in knowing a police officer is at their child’s school, all too often, school cops are caught committing the vilest of offenses. As the following case out of Fullerton, California illustrates, the last thing this cop was doing at school was “protecting children.”

Officer Jose Anthony Paez was arrested and charged last week for secretly photographing and video recording a 16-year-old girl. Authorities caught the child predator with multiple photos and videos taken up the child’s skirt. The images were taken while the officer was at work on the school’s campus.

According to authorities, an investigation was launched after a student or faculty member reported the officer for behaving inappropriately at school. During the investigation, the images were found on Paez’s phone. Investigators also reviewed the last five years of Paez’s body camera footage and found more evidence of criminal behavior which was turned over to the District Attorney.

According to a statement by the Fullerton police department, there are more charges that could follow.

“Law enforcement officers are entrusted with a tremendous amount of authority and trust,” District Attorney Todd Spitzer said in a statement. “The actions this officer engaged in betrayed that trust and preyed on the very people he was charged with protecting.”

“All Fullerton Police Department employees understand the high expectations of the profession of policing,” he said, “and support accountability when those expectations are not met.”

After Paez’s arrest, the department released a statement noting that Paez’s conduct does not reflect the conduct of the rest of the department.

“While conduct of the type we uncovered erodes the community’s trust, and is a true disappointment to our own members, we want everyone to know that the actions of this individual are not reflective of the character of everyone else who works at the Fullerton Police Department,” the statement read. “We remain committed to showing our community, every day, that we are an ethical organization poised to protect and serve the Fullerton community. We are committed to being first to hold accountable those within our organization who do not meet the high standards we set for ourselves. That is exactly what happened in this case.”

Paez is set to be arraigned on October 2 and the special treatment has already begun. Despite the fact that the photos and videos Paez had on his phone were tantamount to child pornography, he was charged with merely peeping. He only faces the possibility of one year in jail if he is convicted. And, if history is any indicator, he will likely never spend a single night behind bars.

In the land of the free, child sex abusers get far less time in jail than people caught with a plant. Disgusting indeed.

Sadly, there is a pattern of police officers getting caught preying on children, raping women, and committing other unspeakable crimes—and never going to jail.

Just last month, we reported on another school cop, officer Matthew Priebe. This officer pleaded no contest to second-degree criminal sexual conduct, attempted fourth-degree criminal sexual conduct, misconduct in office and two counts of assault and battery. The charges all stemmed from his role as a school resource officer and the repeated sexual assault of multiple young girls while on the job. In exchange for his no-contest plea, prosecutors dropped the charge of distributing sexually explicit material to a minor.

The charge of distributing sexually explicit material to a minor was dropped in spite of prosecutors having the photos of Priebe’s erect penis that he sent to the children. The Livingston County Prosecutor William Vailliencourt said on Monday that Priebe’s plea deal would guarantee that he would spend no more than 12 months in jail.

Only two months ago, TFTP reported on the case of California Highway Patrol lieutenant Stephen Robert Deck who was given probation for attempting to have sex with a 13-year-old in 2006. The officer was caught in an undercover sting operation set up by police to catch pedophiles in the act of trying to have sex with kids. Unlike most of the other 12 defendants in the case, who were sentenced to at least one year in prison, Deck was afforded probation simply because he wore a badge.

Although every other person caught in the same sting received jail time, Deck’s badge apparently granted him special privilege. What’s more, this child predator was allowed to keep his taxpayer-funded medical retirement. And we call this “justice” in the land of the free.