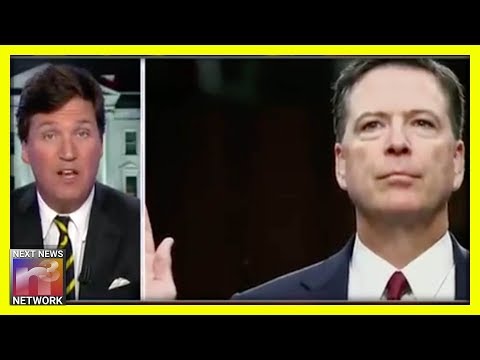 Tucker Carlson is one of the few network newsmen who still resonates with conservative Americans.

America’s frustration over the shenanigans of James Comey are simply boiling over.

And once again, Tucker nails it.

Tucker Carlson delivers a fantastic overview of some of the most egregious things that James Comey did to try and harm President Trump.

It’s frightening to think that a delusional Comey was in charge of the FBI and got no punishment for the things he did.

Comey’s response to the IG report was to gloat and point the finger at everyone but himself:

FOX Business News Anchor Ashley Webster reports in the video below on the response from Jim Comey to the Department of Justice Inspector General’s Report clearing him of prosecution.

Comey didn’t take long to respond to the news of no prosecution for his offenses. He tweeted out a few times to point the finger at those who said he would be brought to justice. As it turns out, there is a two-tier justice system that wouldn’t allow prosecution of Comey even though he lied repeatedly.

Tim Young tweeted what everyone is thinking:

But they won't prosecute him… letting all those employees know they're free to leak whatever they want …got it.

Political correctness is not my thing, so let me just say that every time I see Comey’s face I just feel like reaching through the screen and slapping it.

I have some anger issues. 🙂

This man is one of the most corrupt political figures of my lifetime AND he did it all from an office that is supposed to be politically neutral.

He is protecting some of the biggest criminals in American political history.

How evil is that?

James Comey was the the Directory of the FBI for goodness sake.

That is not supposed to be a political position.

Trump retained him and eventually dismissed him after likely figuring out that Comey was a snake laying in the grass.

Will we ever see Comey prosecuted for his treasonous acts against America?

The prosecution of Comey seems like a longshot at this point.

His conviction & subsequent punishment might take a miracle, even if he were prosecuted.

All we can do is keep exposing the corrupt and hope that justice eventually prevails.