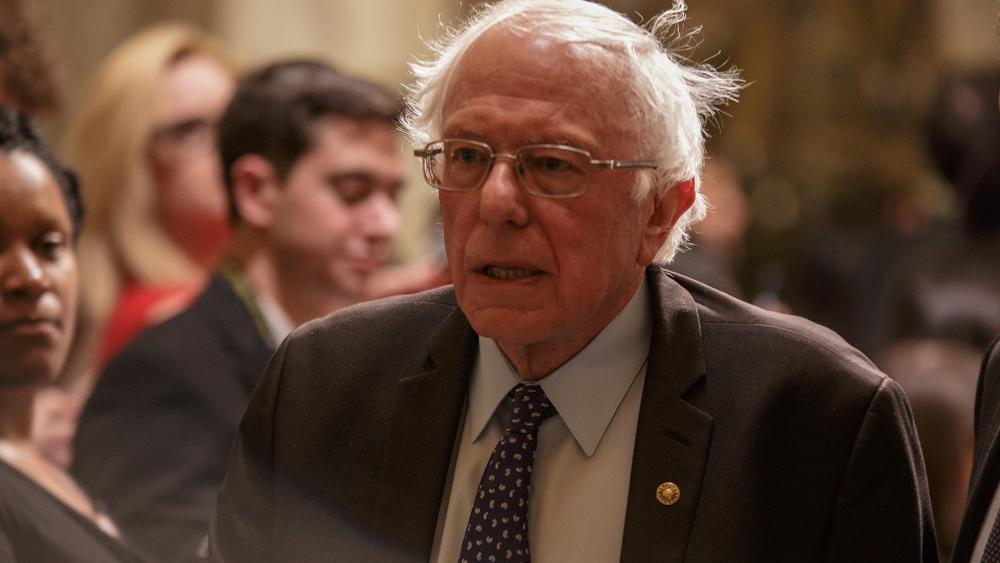 On Wednesday, Bernie Sanders scorned the Bible’s population mandate to fill the earth.

As progressive politicians push the boundaries of taboo after taboo in their quest to build a “Sustainable” future, mainstream Americans are left wondering where they’re headed.  How morally-low can they go and what drives their thinking?

For Senator Bernie Sanders, at least, nothing is more important than saving the planet from climate change.  To do that, he once suggested declaring a World War II-like scale war on humanity.[1] In his latest attack, Sanders aimed his war against humanity on the human population.

On September 4, 2019, CNN hosted a Presidential Candidate Town Hall which included Sen. Sanders.  During the event, a member of the audience identified as Martha Readyoff, a teacher from New Hampshire, was handed a microphone. “Human population growth has more than doubled in the last fifty years,” she said. “The planet cannot sustain this growth. I realize this is a poisonous topic for politicians, but it is crucial to face.  Empowering women and educating everyone on the need to curb population growth seems a reasonable campaign to enact.[2]”

She then asked Sen. Sanders, “Would you be courageous enough to address this issue and make it a key feature of a plan to address climate catastrophe?”

Sanders rose to his feet in response, “Well, Martha, the answer is ‘yes.’”  “The answer has everything to do with the fact that women in the United States of America, by the way, have a right to control their own bodies, and make reproductive decisions.”

Sanders then condemned the Mexico City Agreement and suggested American taxpayer money should be used to fund abortions and population control programs around the world.  “And the Mexico City Agreement,” he said, “which denies American aid to those organizations around the world that allow women to have abortions or even get involved in birth control to me is totally absurd.  So I think, especially in poor countries around the world, where women do not necessarily want to have large numbers of babies, and where they can have the opportunity through birth control to control the number of kids they have, something I very, very strongly support.[3]”

I wish I could say the conversation between Sanders and Readyoff caught me by surprise.  It didn’t.  Instead, it seemed as if their dialogue was read from a script.

The Limits to Growth

In 1972, Jorgen Randers and Dennis and Donella Meadows were commissioned by the Club of Rome to write The Limits to Growth. Referencing their computer models to predict human impacts on climate, The Limits to Growth started what is now called the Sustainable Development movement.  Dennis Meadows explained the book’s primary premise is the belief the world is overpopulated and eventually, over-population will cause over-consumption. They offered three possible outcomes:

First, the world could just do nothing and continue to live normally.

Second, they proposed a 2% shift in the way we produce goods and services.  This would entail “modifying capitalism,” and “modifying democracy,” but, they said, we must begin immediately.  That was in 1972.  Did world leaders ever begin, or was it begun silently?

Third, they proposed reducing our production and consumption habits by downplaying today’s costs in favor of tomorrow’s future.

I believe the second and third options hold the keys to understanding a lot of our present woes- not only our woes, but the woes of citizens in other nations throughout the world.

On September 27, 2015, President Obama signed an agreement with world leaders to create a new path of world leadership under the direction of the United Nations.  Transforming our World: the 2030 Agenda for Sustainable Development vows to leave no citizen behind in its commitment to do whatever it takes to create a sustainable world order before 2030.

Folks, as of the time of this writing, they’ve only got eleven years to reach their goal.  The next election is critical.

Since the signing of Agenda 2030, capitalism, a critical enabler of the American Dream, has come to be regarded by many as a primary enemy of the environment.  We’ve also witnessed the effects of a rogue network of fake news, social media censorship, global citizenship education, manipulated search engine algorithms, character assassinations, and other propaganda tools to modify our behavior and values.  The level of exposed government corruption is unprecedented, yet convictions appear elusive.  Meanwhile, our election process is in despicable disarray, and those who make efforts to verify voters are vilified.  We’re in the midst of a social revolution, and no one is explaining it or telling us where they intend to take us.  But Jorgen Randers offers some clues.

Curiously, Randers predicted during a 2013 television interview that America would soon be a socialist nation.  He also said the U.S. would have the fastest declining economy in the world, partly because of a declining population.[4]  I don’t think it’s a coincidence that a Sustainable Development advocate like Bernie Sanders almost secured the previous Democratic presidential nomination.  Nor do I think the growing socialist elements that burst onto the Congressional scene during the last election cycle are coincidences either.

Reversing the Biblical Perspective on Humanity

Likewise, I don’t believe Sen. Sanders’ vision for America is far removed from Jorgen Randers’ vision.  On March 14, 2012, Randers articulated his vision for the future at the 10th Annual Distinguished Lecture Series in Sustainable Development at Cambridge University.  “If I could persuade you of one thing,” he began, “it should be this: the world is small and fragile and humanity is huge, dangerous and powerful.  This is a total reversal of the biblical perspective on humanity, and the way in which man has thought during most of his presence on Earth.  But this is the perspective we need to take if we’re to be sure that sustainability emerges, or, at least, that the world as we know it survives for a couple of hundred more years.[5]”

What Randers admits, but what most people fail to realize, is the true purpose of the UN’s Sustainable Development Agenda is to replace biblical authority.

Readyoff’s question seemed destined to be asked, aged like wine, and uncorked at the right moment.  That moment is now and a new “sustainable” world order by 2030 is the goal.

Will America embrace Sen. Sanders’ population control policy to save the planet, or will we return to our Creator and Sustainer, who gave us the population mandate,

Bernie Sanders has taken his stand to reverse the biblical perspective on humanity.  Where will you stand?

[1] The Club of Rome, “Towards a WW2-Scale Climate Mobilisation,” https://www.clubofrome.org/2016/04/28/club-of-rome-member-responds-to-bernie-sanders-climate-statements/ (September 5, 2019)

[5] The Future in Practice: The State of Sustainability Leadership, lecture by Jorgen Randers, 2052: A Global Forecast for the Next Forty Years, https://www.cisl.cam.ac.uk/resources/publication-pdfs/jorgen-randers-2052-a-global-forecast-for-the-next.pdf  (January 5, 2019)

Doug Carter is a professor of ethics and Bible courses.  A graduate of North Carolina State University and Southeastern Baptist Seminary, his articles about cultural issues from a biblical perspective have appeared on the Rush Limbaugh Show and Western Journalism.  You can find Doug on Twitter or follow his blog.