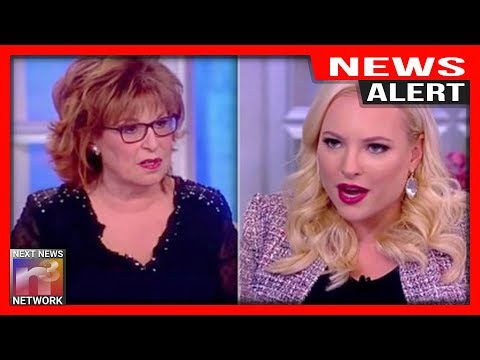 Remember when The View used to be quality television? I don’t either.

But once in awhile something worth watching supposedly happens on set and the media buzzes about it.

Here’s Gary with the latest,,,

Did we just see evidence of someone with a brain on The View?

I’d say this is more proof that the show is scripted, but in case it isn’t — GOOD FOR YOU MEGHAN MCCAIN!

Meghan McCain doesn’t have a great track record as a Trump supporter, but she came out full force in support of NOT banning the AR-15.

The View’s Joy Behar said “if you keep rooting for Republicans, you’re going to get nothing done” on assault weapons.

Meghan McCain jumped into the discussion with a defense of guns and specifically the AR-15:

Meghan McCain, after saying there will be “violence” in America if the AR-15 is banned because it’s “the most popular gun” in the country, then declares that she’s “not living without guns.”

Good luck coming for my guns, but they may very well come for my mancard.

Because I actually agree with one of the women from The View.

Good on you Meghan McCain.

Joy Behar hasn’t a clue it would seem.

Do you know how many good guys with guns save Americans every year in this country?

Of course not because when guns are used for self-defense it is not covered by the leftist media and good luck finding statistics of how many lives guns save each year.

But here are several cases that somehow slipped through the censorship:

I could show dozens more.

But accepting truth is something that requires logic and sound reasoning skills.

I’m not sure Joy Behar is equipped with either.