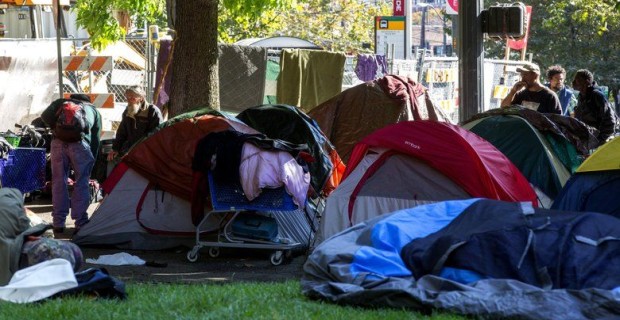 A leftist council member recently tried to stop feces being cleaned off the streets of Seattle with a power washer, arguing that it was racist.

The problem centers around King County courthouse in downtown Seattle, where homelessness is surging and a tent city has sprung up in a nearby park. Several courthouse employees and two jurors have been assaulted.

The area is also littered with fecal matter, leading King County Sheriff John Urquhart to ask the county to order a daily power wash of the sidewalks, which “reek of urine and excrement.”

However, leftist Council member Larry Gossett pushed back against the proposal, arguing that it was racist because power washing “brought back images of the use of hoses against civil-rights activists.”

That’s right. Because high pressure water hoses were once used over 50 years ago to oppress civil rights activists that means streets in 2019 should remain smothered in shit.

What’s next? Maybe we should just let fires burn endlessly because someone might get offended at the sight of a hose.

As we previously reported, Seattle parks are becoming no-go areas for the general public because of spiraling problems with aggressive homeless people and trash.

As we highlight in the video below, San Francisco also has a monumental poop problem and power washers seems to be losing the battle.