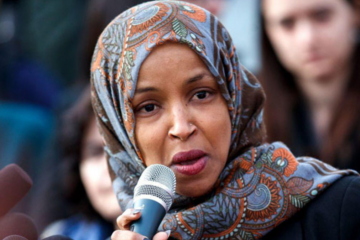 Ilhan Omar has expressed her desire for American citizens and ICE agents to be infected with Mumps as an act of open borders biological warfare.

In yet another example as to why Muslim Rep. Ilhan Omar is unfit to be serving in the US Congress, the disgraced Congresswoman expressed her desire in a tweet for American citizens and ICE agents to be infected with Mumps as an act of open borders biological warfare.

Biological warfare is defined as: “the use of toxins of biological origin or microorganisms as weapons of war.”

According to Omar, illegal aliens infected with highly contagious diseases who break international law and cross over over the US border ought to be allowed to further infect Americans and law enforcement stationed on the border.

In Omar’s own words, “we should be welcoming immigrants into our country”…even if they have mumps and other infectious diseases.

That’s right. Democrats like Ilhan Omar seem to want open borders at the expense of Americans being infected with highly contagious micro-organisms carried by illegal aliens who are traveling in massive caravans of thousands of people with the stated goal of forcefully penetrating an international border.

Make no mistake. The act of penetrating an international border with thousands of people with the purpose of invading a country is an act of war and would be treated as such by any other sovereign country in the world.

Depending on the type of Microorganism some illegals are infected with, these diseases can create a national health epidemic and health emergency if given the opportunity to spread like wildfire throughout the United States.

We should be welcoming immigrants into our country. Instead, we are locking them in cages and infecting them.

We need immigration reform. And that begins with abolishing ICE. https://t.co/9U5q3EwFzq

Omar’s statement is an open declaration of biological warfare against the American people and law enforcement officers. Her idea of immigration reform isn’t securing the border and decreasing the spread of infectious disease. Her idea of immigration reform is firing ICE agents for following US law, and punishing American citizens and law enforcement for the un-sanitary third-world conditions of the “shit hole” nations that majority of these illegal aliens are migrating from.

“We should be welcoming immigrants into our country. Instead, we are locking them in cages and infecting them. We need immigration reform. And that begins with abolishing ICE.”

Omar not only called for infected migrants to be allowed to cross illegally into the US with disregard to American citizens who have gone to great lengths to vaccinate their children to prevent mumps and other diseases, but she called for abolishing ICE in reference to mumps.

Migrants from third world countries where infectious and sometimes lethal diseases are found, including countries in Africa and South and Central America, are illegally entering the US through the Southern border.

Not only do these migrants infect other migrants they come in contact with, but they also infect Border Patrol officers and ICE agents who come into contact with migrants when they are caught and detained for breaking US law.

Instead of advocating for LEGAL immigration and showing concern for the fact that Mumps is now at an all-time high in the United States thanks to illegal aliens and the open borders Democrats who welcome disease-ridden people with open arms, Omar called for infected criminal migrants to be allowed into the United States and blamed US Border Patrol and ICE officers for infected migrants.

ICE agents didn’t infect migrants with mumps, but Omar wants her fellow deranged followers and colleagues to spread that allegation in an attempt to incite violence against ICE agents.

In fact, it’s the other way round. Infected migrants are infecting other migrants and ICE agents with diseases they contracted in their impoverished disease-ridden countries of origin.

Omar has also been quoted in the past calling for the “eradication of ICE’s existence”. Following her calls for violence against ICE officials, a domestic terrorist who cited Omar and AOC in his manifesto tried to firebomb an ICE facility with the goal of killing every agent inside.

Omar, unsatisfied with the fact that her follower was unsuccessful in killing ICE agents, is now looking for another way to “abolish ICE”.

It is undeniable that Omar is advocating for ICE agents to be physically abolished through mumps, a contagious microorganism that could be used as a weapon of biological warfare, especially given that caravans of thousands of people are attempting to storm the US border with the encouragement of radical Democrats like Ilhan Omar.

If Omar was a true American, she might have a greater sense of urgency to keep Americans safe from infectious disease. But Omar, who took her oath on the Quran, has referred to Somalia as her “home”, and constantly attacks the United States as an “unjust” nation. Omar originates and has allegiance to a country that has deep-seated hatred for Americans and Western values, which is why Omar couldn’t care less about Americans contracting disease. Omar’s goal is to make America just like her Islamic country of origin, even if that means bringing the leading causes of death in Somalia to America through the US-Mexico border.

According to the World Health Organization (WHO), lower respiratory infections are still the leading cause of deaths in Somalia, followed by diarrhoeal diseases, measles, malnutrition, tuberculosis, meningitis and maternal conditions.

These are all diseases that Border Patrol officers have been exposed to on the job upon coming into contact with illegal aliens.

According to the Department of Homeland Security, tuberculosis and other infectious diseases are spreading among migrants South of the border.

As reported by the Washington Examiner:

“They’re one major incident away from a catastrophe — someone comes in with an active case of tuberculosis or something worse than that,” said Ronald Vitiello, who during the Trump administration served as acting director of Immigration and Customs Enforcement and deputy commissioner of Customs and Border Protection.

Dr. William Schaffner, an infectious diseases specialist at the Vanderbilt University Medical Center in Nashville, cited respiratory infections, diarrheal infections, and bacterial infections as some of the health concerns medical staff working on the border would have to constantly be on the look-out for.

“Whenever you get individuals congregated in an enclosed space, no matter what their age, there is an increased risk of outbreaks of certain kinds of infections,” said Schaffner.

The doctor also warned of the possibility of an outbreak of a preventable condition — mumps, scabies, measles — because people were not vaccinated.

“If I was running such a facility, that would be one of the first things I would think of is to provide comprehensive vaccinations. Of course, we don’t know in the vast majority what the vaccination history is,” he said. “Usually what we do is assume they’re all unvaccinated and bring them all up to date. It takes time and you’d need to establish a medical record.”

During Barack Hussein Obama’s presidency, documented cases of Mumps infections reached the highest level in a decade. Obama’s eight years of importing people from third world countries in the Middle East, South and Central America put Americans in harm’s way. Under his presidency, the American people were subjected to Ebola scares, a rise in cases of measles and mumps outbreaks, and increased acts of Islamic terror committed by Obama’s prized Syrian “refugees” who are still trying to sneak across the US Southern border.

The media won’t tell you, but border agents are constantly finding prayer rugs and Qurans along the US-Mexico border from Muslim migrants who originate from terror hotbeds in the Middle East.

Even President Trump has tweeted about these dangerous Muslim migrants on the US-Mexico who people like Ilhan Omar, Rashida Tlaib, and AOC would like to welcome with open arms…even if they are members of ISIS.

As reported by LauraLoomer.US months ago, your source for real news the mainstream media doesn’t want you knowing about:

Border Patrol agents at holding facilities across the southwest border being inundated with sick detainees and agents are sounding the alarm on the possibility of an Ebola outbreak among migrants who have illegally entered the United States from the Democratic Republic of Congo.

Vice President of the National Border Patrol Council Jon Anfinsen, which is based in Del Rio, warns the number of people in detained with infectious diseases is “unprecedented” and exacerbated in overcrowded detention centers.

According to the U.S. Centers for Disease Control & Prevention (CDC), the number of cases of Mumps nearly tripled in the U.S. since 2015.

Enough is enough. Omar has not only advocated for members of ISIS and other enemies of America as an elected official, but she is now using her position as a member of the US Foreign Affairs Committee to encourage illegal aliens to commit biological warfare against the American people.

She must resign from Congress or be removed for the sake of US national security.

Our country is at risk and it is being destroyed by enemies from within the halls of Congress who practice a supremacist ideology that seeks to conquer the United States.

Omar has made it very clear that she is determined to see the destruction of the United States of America, even through the means of biological warfare.