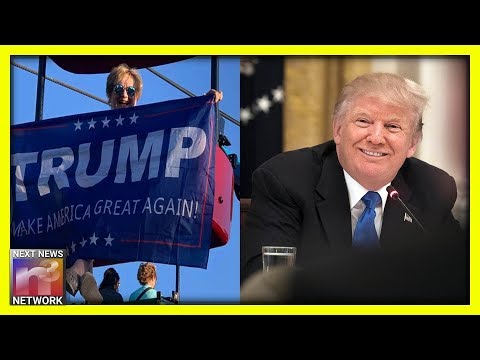 The Minnesota State Fair has not been without political controversy in 2019.

So, with controversy in the air, who could blame Trump supporters for seeing an opportunity and taking it?

What harm were any of these people doing?

Is it against the law to trigger leftists these days?

Get a grip cops.

This is one of the most beautiful things I have ever seen.

The Minnesota State Fair Organization has gotten involved in order to shut down a grassroots movement to fly pro-Trump flags while riding on the SkyGlider at the fair.

Pro-Trump fairgoers were greeted by police officers on Aug. 30th and told they would be arrested if they continued to display their flags. The police even jumped on the SkyGlider with the group of Trump supporters to make sure they stopped displaying their Trump 2020, Thin Blue Line, and Betsy Ross flags. That didn’t stop them. They flew the flags anyway, but no one was arrested. Video at the bottom of the article shows happy Trump supporters flying flags as they ride on the SkyGlider…Priceless! “I encourage everyone who visits the State Fair to continue to show your support for our POTUS and fly your flag with PRIDE on the SkyRider. We will not be silenced,” pro-Trump activist Sheri Auclair said in a Facebook post. The Minnesota State Fair Organization somehow thinks this is an effort by the Minnesota Republican Party, so they sent them a cease and desist order! What the hell is going on here folks?

Have you ever seen people do something like this without having George Soros pay for it? 😉

This is what happens when you strip away all of the bull $hit and let Americans express themselves.

The great people of this country are not those guys that wear black hoods and fancy themselves ninjas.

Oh no, those are not the people that make America great.

And they say the HATE is coming from our side?

They will have to put up with this for 4 more years beginning in 2020.

They need to relax and try to learn something.