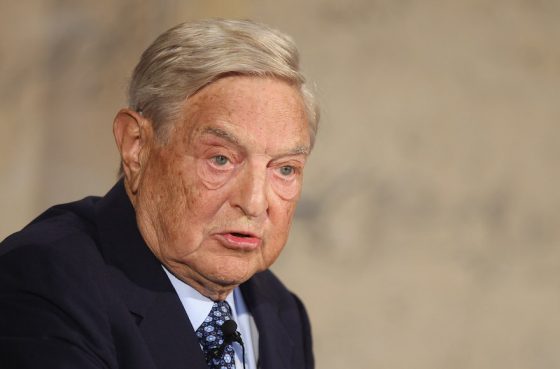 There is no other way to say it: politicians and the elitists are coming for your guns. If they can get them from you and convince you to turn them over willingly, they will do so with propaganda.  But don’t expect that to be the end of it.

Isn’t it ironic that in order to take away guns from non-violent people, violent people must use guns to do so?  It’s hard to believe this escapes the minds of far too many people on this earth. Soros and people in the ruling class certainly want all the control in every situation and it’s much easy to enslave an unarmed populace. This is nothing less than an attempt at complete domination over everyone they think is beneath them.

According to a report by the Free Beacon, liberal billionaire George Soros’s advocacy organizations are lobbying lawmakers on Capitol Hill to repeal an act protecting firearms manufacturers from liability for gun crimes including murder, disclosure forms show. The Open Society Policy Center is Soros’s D.C.-based 501(c)4 nonprofit that works on domestic and international advocacy and is affiliated with the much larger Open Society Foundations. The center has poured nearly $9 million into lobbying a range of issues so far this year.

Soros’ group moved into gun control advocacy and reported lobbying on “issues related to a bill to repeal the Protection of Lawful Commerce in Arms Act.” The Protection of Lawful Commerce in Arms Act (PLCAA) was passed as a bulwark against frivolous lawsuits attempting to hold gun companies responsible for criminal acts committed by third parties—sometimes decades after the first legal sale of the firearm. The National Shooting Sports Foundation, the gun industry’s trade group, pushed to pass the bill in 2005. The group said the legal protections are necessary to keep gun control activists from bankrupting the industry through suits they believe have no legal standing.

“The National Shooting Sports Foundation worked with Congress to get the Protection of Lawful Commerce in Arms Act passed with broad bipartisan support and signed into law by President George W. Bush,” Mark Oliva, a spokesman for the group, told the Washington Free Beacon. “This law correctly protects the firearms industry against frivolous lawsuits that seek claims against manufacturers for the criminal misuse of a firearm. Those who commit crimes with a firearm are the ones who bear the responsibility for the horrific effects of their actions. The PLCAA ensures this is the case.”

Bankrupting the firearms industry with frivolous lawsuits is only one-way tyrants are attempting to disarm people.  The U.S. is seeking to enstate a social credit score much like Communist China’s and it could very well be used to deny self-defense rights to people.  If you disagree with the political establishment, you won’t be allowed to own a gun.  That’s a slippery slope if ever there was one.

The PLCAA does not shield the firearms industry from traditional liability. Firearms companies can be sued for making or selling defective products. Remington recently settled a class-action suit related to defective triggers in their 700 bolt-action rifle.

Holding gun companies liable for crimes committed with guns is comparable to holding car companies liable for drunk drivers. “Seeking redress against a firearms manufacturer instead of the criminal is no different than a drunk-driving victim holding Ford responsible for that crime,” Olivia told the Free Beacon.

College Student Gets Suspended for Saying ‘A Man Is A Man, A Woman Is A Woman’ (Details)
February 25th, 2021 Flag And Cross

What Happens When Violent Criminals Are Released Early: Man Murders Woman, Cuts Her Heart Out and Cooks it For His Family
February 25th, 2021 TCP News