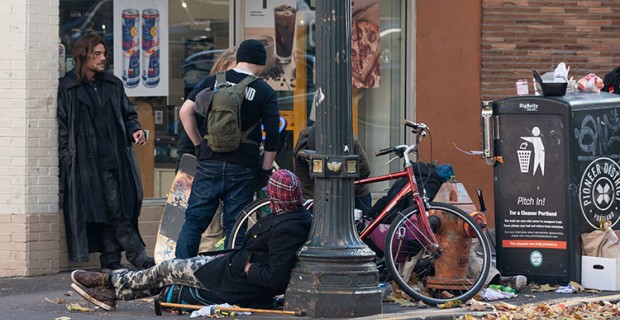 A post featured on the r/Portland Reddit thread claimed that police said it was legal for the homeless to defecate in public after shocked onlookers saw a man with his butt in the air “depositing a 6-8″ turd onto the sidewalk.”

Titled ‘Is it really legal to take a dump on the sidewalk?’ – the Reddit user explains in the post how he was on his way to lunch when he noticed a group of people pointing and staring in the same direction.

“There was a homeless person bent at the waist, pants down, ass in the air, depositing a 6-8″ turd onto the sidewalk,” he writes.

“One onlooker went across the street to tell 2 police officers, and she came back and said “The cops say it’s legal.” After my lunch, the turd was still there with shoe prints in it, tracking it down the sidewalk.”

The Reddit user expressed amazement that defecating in public was legal, asking, “Is there really no one the cops could have notified to clean it up?”

“9 inch and under = good to go,” joked one respondent.

As we highlighted yesterday, a leftist council member recently tried to stop feces being cleaned off the streets of Seattle with a power washer, arguing that it was racist because it reminded him of hoses being used to disperse civil rights protesters.

As we document in the video below, Portland’s problems aren’t just restricted to public pooping. The whole city is basically a shithole for all manner of different ‘progressive’ reasons.