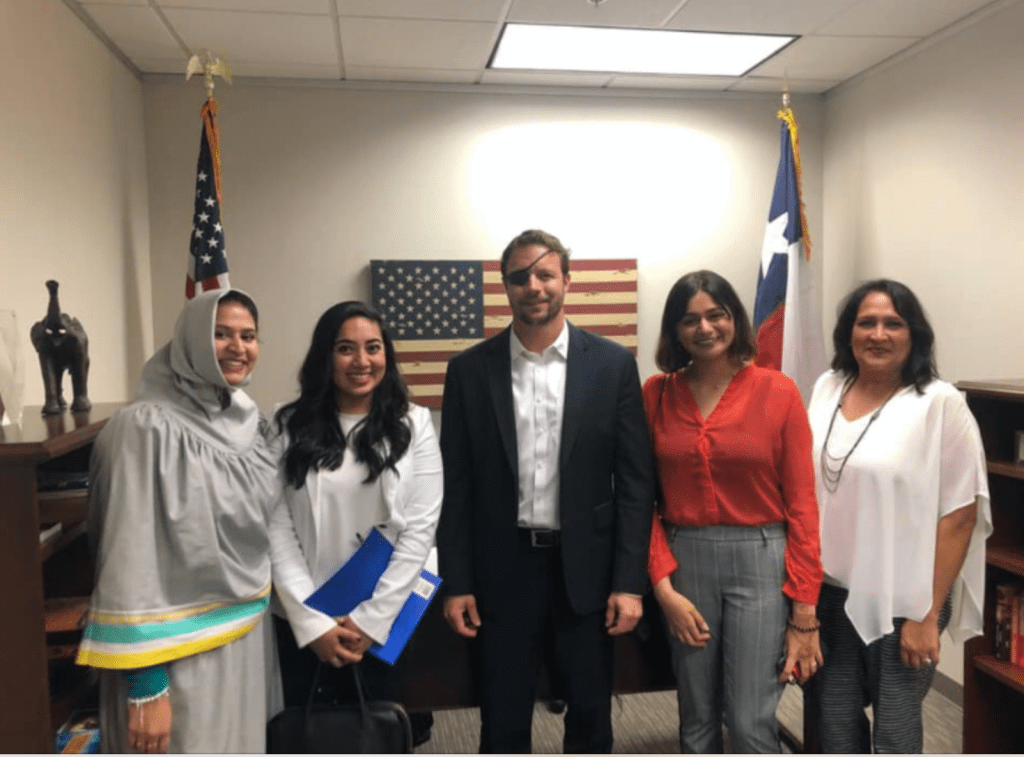 Why on earth would a Navy Seal turned Republican Congressman meet with an Islamic group that has terror ties?  It is no surprise that Islamic organizations in the United States have been working overtime to gain political power. The 2018 midterm elections resulted in the election of the first two Muslim Congresswomen, Ilhan Omar and Rashida Tlaib, and Keith Ellison, the first Muslim attorney general, all of whom have proven themselves to be anti-American, anti-Jewish, and anti-Christian.

But, what many people in America aren’t aware of are the political organizations and Muslim advocacy groups behind the candidates, backing them with financial support and shaping their policy.

One of the organizations focused on getting Muslims elected to political office in the United States is “Emgage”, which describes itself as “the political home for Muslim Americans”.

“Emgage focuses on programs based on community organizing and building strong relationships in order to drive voter registration and participation for the Muslim community in the United States. We seek to educate, empower, and engage Muslim Americans through educational events, voter initiatives, and leadership development in order to create a community of equitable, knowledgeable, and motivated citizens.”

In one tweet posted on Emgage’s official Twitter page, the Muslim group. which also has a PAC said,

“Emgage continues to work on behalf of the Muslim American community to ensure that the Muslim ban is repealed. We are grateful to @RepFletcher and @DanCrenshawTX for a discussion on the NO BAN Act and their support!”

Emgage continues to work on behalf of the Muslim American community to ensure that the Muslim ban is repealed. We are grateful to @RepFletcher and @DanCrenshawTX for a discussion on the NO BAN Act and their support! pic.twitter.com/I99lEU3qYa

Emgage continues to work on behalf of the Muslim American community to ensure that the Muslim ban is repealed. We are grateful to @RepFletcher and @DanCrenshawTX for a discussion on the NO BAN Act and their support! 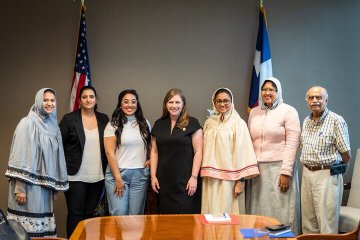 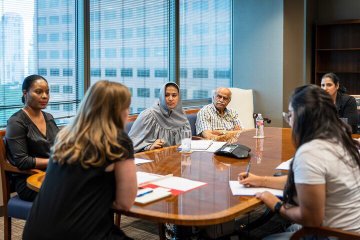 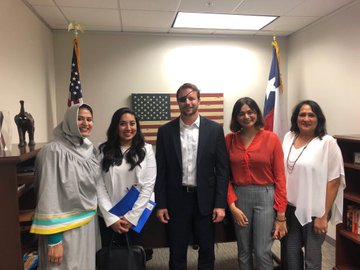 As the tweet and the pictures show, Rep. Crenshaw did, in fact, meet with Emgage representatives, and according to Emgage, the discussions were focused on President Donald Trump’s “travel ban”, which many Muslim organizations and the fake news media have falsely described as a “Muslim Ban”. However, President Trump never implemented a Muslim ban. Instead, Trump’s travel ban halted travel for 90 days for residents of six Muslim countries, including: Iran, Libya, Somalia, Sudan, Syria, and Yemen.

All of these countries have high levels of terrorist activity.

Oddly, Emgage thanked Rep. Crenshaw for his “support” of their NO BAN Act.

Why is this bad?

See for yourself. Emgage has chosen Rep. Ilhan Omar as the face of the “No Ban Act”, and as displayed on their twitter, Emgage #StandsWithIlhan.

You know, the same Ilhan Omar who advocated for 9 Somali men in Minnesota who were accused of joining ISIS.

Emgage is a Muslim Brotherhood-affiliated group and PAC that focuses on getting Muslim and far-left candidates elected to office. While Emgage claims to be non-partisan, a quick look at who they have previously endorsed reveals that they have a liking for some of the most radical leftists in America.

Along with supporting socialist candidates, Emgage is also a highly anti-Semitic organization that keeps of the company of prominent Jew-haters like Linda Sarsour, Ilhan Omar, Rashida Tlaib, and CAIR, an internationally designated Islamic terrorist organization.

Directly beneath Emgage’s tweet about Rep. Crenshaw is a retweet of Linda Sarsour.

Linda Sarsour is a radical left-wing Muslim Brotherhood activist. On July 1, 2017, Linda Sarsour gave a speech at the 54th Annual Islamic Society of North America (ISNA) Convention in Chicago. During that speech, Sarsour not only infamously called for Muslims to carry out Jihad against President Trump, but she also used her speech as an opportunity to praise Imam Siraj Wahhaj.

ISNA, which stands for the Islamic Society of North America, is a Muslim Brotherhood-HAMAS affiliated group that has financially supported HAMAS, which the United States recognizes as a designated Islamic terror org.

Less than one week ago, Emgage, which supports ISNA, retweeted communist Senator and soon to be twice-failed presidential candidate Bernie Sanders who said he was “looking forward to joining his friends at #ISNACON- the largest gathering of Muslim Americans in North America”.

Again, it was at the ISNA convention where Sarsour, on video, declared jihad against President Trump and said Siraj Wahhaj was her mentor.

Siraj was not only named in court documents as an alleged “co-conspirator” in the 1993 bombing of the World Trade Center, but he often calls for the killing of innocents in the name of Islam. Siraj once said,

“Nothing personal.” That is what Siraj, Sarsour’s “mentor” and “favorite person” had to say about Islamic terrorism. According to Siraj, it’s ok to stone people to death and chop people’s hands off, if Allah commands it.

Even more concerning, Siraj is also known for saying, “It is my duty and our duty as Muslims to replace the U.S. Constitution with the Quran.”

Wahhaj is also the father of one of two men who authorities arrested on August 8 in New Mexico and described as armed “extremist Muslims” after it was discovered that they had kidnapped 11 children who they were training to become “school shooters”.

While fully aware that Siraj is a terrorist co-conspirator, a proponent of Islamic terror, and a supporter of destroying and replacing the U.S. Constitution with Sharia Law, Sarsour still proclaimed Siraj as her mentor.

Even while knowing all of the this, Emgage has continued to support Sarsour and ISNA…and now they have their eyes set on Rep.Crenshaw.

Sarsour, who has a lengthy resume of Jew-hatred, is also an ally of CAIR, the Council on American Islamic Relations, which has been found to have direct ties to HAMAS.

Hamas has been classified as a designated terrorist organization by the U.S. State Department and is listed as a co-conspirator in the Holy Land Foundation HAMAS terror funding trial in 2008, which is the largest terrorism financing case in U.S. history. In the Covenant of Hamas, which outlines the goals and motive of Hamas and its members, it states that one of its main goals in the destruction of Israel.

“Israel will exist and will continue to exist until Islam will obliterate it, just as it obliterated others before it.”

Despite the fact that CAIR has been linked to terror financing and is recognized as a terrorist organization in the majority Muslim United Arab Emirates, Emgage still openly associates with and partners with CAIR on their political activities.

Here is an example of what employees of CAIR, which associates with Emgage, believe.

Zahra Billoo is the Executive Director of CAIR’s San Francisco’s chapter and as you could probably guess, Emgage supports Billoo!

Just look at the screenshots of their twitter history.

Billoo won’t even condemn Jihad or Sharia, even though it was a jihadist who set off an IED that resulted in Rep. Dan Crenshaw tragically losing his eye.

Adding fuel to the fire, CAIR, which is an ally of Emgage, has publicly attacked Rep. Crenshaw on Facebook and falsely accused him of being tied to an “Islamophobic” “white nationalist” Facebook group. Emgage also supports Rep. Ilhan Omar, who attacked Rep. Crenshaw after he criticized her for describing the terrorist attack on 9/11 as “some people did something”.

As a Republican, Rep. Crenshaw is supposed to be supporting and defending President Donald Trump’s agenda, which is what he does the majority of the time.

However, the most troubling thing about Rep.Crenshaw’s meeting with Emgage is the fact that it isn’t justified on any grounds whatsoever.

Republican candidates should not be meeting with terror tied Islamic political groups that falsely accuse the Trump administration on a regular basis of “emboldening white supremacy and white nationalism”.

Emgage, the same organization that met with Rep. Crenshaw and is publicly thanking him on Twitter, supports Sarsour, Ilhan Omar, and CAIR, which begs the question:

Why would a war hero like Dan Crenshaw meet with a terror tied Muslim group that associates with and supports the most anti-American candidates who have ever held office in the United States?

Here at LauraLoomer.US, we have a lot of respect for Rep. Crenshaw’s service to the United States of America. He is a war hero who lost an eye on the battlefield while serving in the Helmand Province of Afghanistan in 2012, when he was injured by the detonation of an improvised explosive device (IED). Even after losing his eye in war, he has gone on to serve his country in the United States Congress. However, we also believe that it is important for all US elected officials to distance themselves from, and formally condemn groups like CAIR, ISNA, and Emgage, all of which have terror ties.

Emgage, as a group, associates with individuals and other Islamic organizations like CAIR that have known terror ties, and have expressed countless anti-American sentiments.

Less than two weeks ago, on August 22, 2019, CAIR posted a press release on their website in which they said they were partnering with a “coalition of Muslim organizations launching nationwide voter registration efforts”. Emgage was listed as one of those organizations.

It makes no sense as to why Rep. Crenshaw, an all American Navy Seal would meet with Emgage, but hopefully upon reading this article and seeing the evidence that Emgage is working with enemies of America, Rep. Crenshaw will never meet with Emgage again and will go on the record to set things straight regarding Emgage’s nefarious statement that Rep. Crenshaw “supports” their NO BAN Act.

If you’re reading this Rep. Crenshaw, thank you for your service to our country, but please continue to serve our country in the best way possible by combatting destructive forces on the Left like Emgage and CAIR that seek to destroy our beautiful country from within.

Following the publication of this article, Rep. Crenshaw spoke with LauraLoomer.US and told us:

“I do think CAIR has been out of bounds…I interpreted that tweet to mean general support for the community and not necessarily the No Ban Act. I told [Emgage] them that legislation wouldn’t be reasonable, and they understood that. But again, they are constituents and we have to hear them out. I understand the Muslim community quite well given my experiences.”

Given Rep. Crenshaw’s prompt response in which he says he told Emgage that he would not support their “No Ban Act”, it is unclear why Emgage, a Muslim Brotherhood-affiliated political group is going around on social media thanking Rep. Crenshaw for “support”. It is also baffling as to why Emgage even met with Rep. Crenshaw given that the organization only supports Muslim and Far-Left candidates and politicians, and Rep. Crenshaw is a Republican.