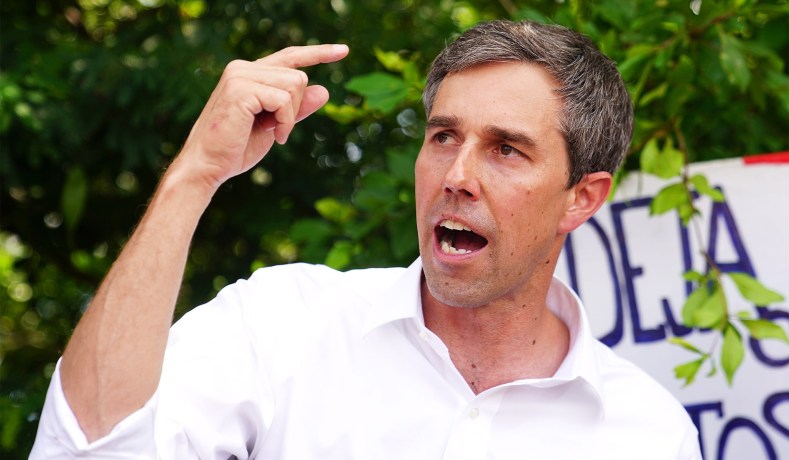 Beto O’Rourke said Saturday in New Hampshire that he expects American gun owners to willingly hand over their firearms under his promised mandatory buyback program.

The Democratic presidential candidate and former Texas congressman declared last week following a mass shooting in West Texas, “This is f—ed up.” He also reiterated that if elected president he would “institute a mandatory buyback of every assault weapon in America.” He then went on to create and attempt to sell shirts with his ‘f-ed up’ statement.

“No. I don’t see the law enforcement going door to door. I see Americans complying with the law. I see us working with gun owners, non-gun owners, local, county, state, federal law enforcement to come up with the best possible solution. I have yet to meet an owner of an AR-15 who thinks it’s OK that we have these kind of mass killings in this country,” he said.

Pressed on what he would do if gun owners did not comply as he anticipated, O’Rourke said: “How do you — how do we enforce any law? There’s a significant reliance on people complying with the law. You know that a law is not created in a vacuum.”

He added: “You’ll have the input of members of Congress who are going to reflect their constituents’ interests, and at the end of the day, I agree to get to a solution that protects your Second Amendment rights while protecting the lives of everyone in this country.”

However, O’Rourke took a different tone while campaigning last weekend in Charlottesville, Virginia. Asked to address fears that the government is going to take away people’s “assault weapons,” he said, “So, I want to be really clear that that’s exactly what we’re going to do.”

He later tweeted a video of the exchange, saying: “Americans who own AR-15s and AK-47s will have to sell their assault weapons. All of them.”

I was asked how I'd address people's fears that we will take away their assault rifles.

I want to be clear: That's exactly what we're going to do. Americans who own AR-15s and AK-47s will have to sell their assault weapons. All of them. pic.twitter.com/YbnSsz3bVy

On Wednesday, O’Rourke admonished Meghan McCain, cohost of ABC’s “The View,” for warning on the show days earlier that forcing Americans to sell their assault rifles would prompt “a lot of violence.”

“I just I think that kind of language and rhetoric is not helpful,” O’Rourke told The Daily Beast. “It becomes self-fulfilling; you have people on TV who are almost giving you permission to be violent and saying, ‘You know this is this is going to happen.’”

Following a series of headline-grabbing mass shootings, other 2020 presidential contenders have also renewed their advocacy for background checks, “red flag” laws, gun buybacks and the like.

Meanwhile, gun rights advocates have pointed out that the Odessa shooter had been barred under federal law from owning or buying firearms because a court had previously determined he was mentally unfit.

Last Sunday President Donald Trump argued that background checks would not have prevented any of the recent mass shootings.

“Over the last five, six, or seven years, no matter how strong you need the background checks, it wouldn’t have stopped any of it,” he told reporters.

Trump has another plan for dealing with mass murders. According to an administration official, the president has the Justice Department drafting legislation to expedite expedite the death penalty for such people.