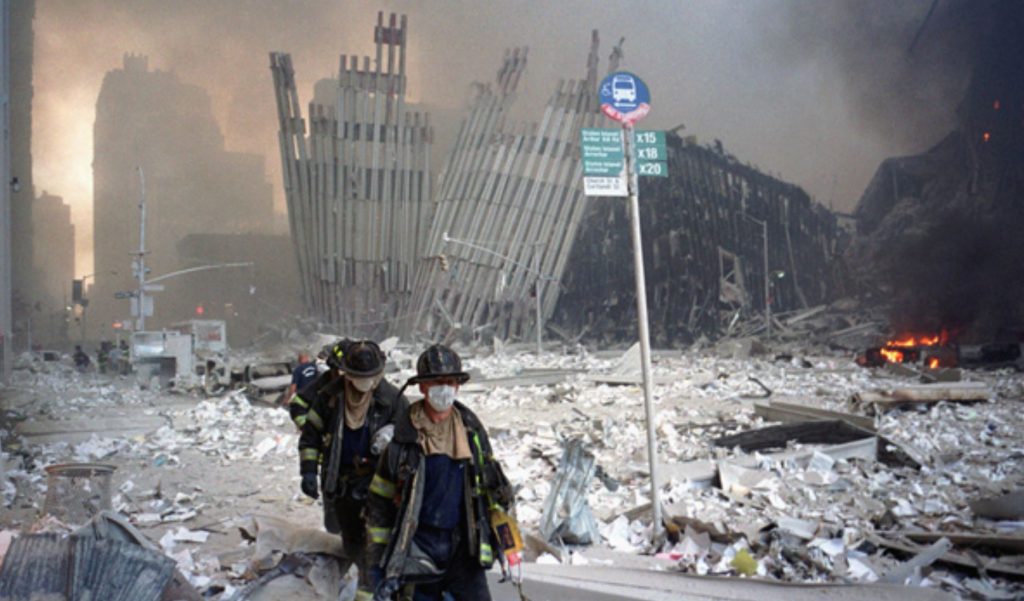 For many, Sept. 11, 2001, was a day that will forever be seared into the minds of those who were witness. On that day, the nation was awoken by a harsh reality that there are people who want nothing more than to destroy our freedom, our way of life. That morning, America was brutally scarred for life. It was a day that 19 hijackers, four airplanes, two towers, and one deranged ideology brought the threat of terrorism to the forefront in our country.

For when we think of 9/11, we think of all the things that understandably come to mind. We think of death – the sheer number of Americans killed that day was staggering. We think of terror. We think of tragedy, of loss, of hopelessness. We remember watching over 3,000 of our friends and family dying that day, we remember the screams of the heroes on Flight 93, the screams of women and men, mothers and fathers, wives and husbands, who desperately made an attempt to take back a plane scheduled for a suicide mission which surely would have killed many more.

I always have one other thought however – I think of life, and how mine began that day.

In a powerful speech during the 2010 mid-term elections, Sarah Palin framed campaigns using an issue sometimes relegated to the back burner during turbulent times – abortion. According to her, the elections boiled down to candidates who favor a ‘culture of life’, and those who promote a ‘culture of death’.

There are several arguments made by those supporting legalized abortion, the health of mother and child, and cases of rape and incest being what resonates with most. Polling suggests that a very small fraction of abortions are performed for these extreme reasons. Problems arise mostly in those who view abortion as a matter of social and economic convenience. Herein lies a fundamental flaw with the pro-choice argument; a struggle to acknowledge the fact that a human life begins at conception, and that same life is not an inconvenience but rather, a necessity.

This has been a concept that I, myself, once struggled with. Exactly 18 years ago that personal struggle ended. For Americans, 9/11 has a singular tragic meaning related to the events we endured as a nation. For one man, it also served as an awakening; a transformation from a ‘culture of death’ mentality, to a conservative embracement of life.

The year prior to 9/11, when word was received of the pending birth of my first child, my reaction, much like the autumn breeze, was a bit chilly. I went so far as to heavily promote the idea of an abortion to my girlfriend. I had failed to recognize the value of life, and though my girlfriend fortunately had, she was unable to instill this in me.

Recognizing that this disagreement was going nowhere, my next move was one that would make any self-respecting coward proud – I ran. Frightened. From responsibility, from acceptance of my actions, from hard work, from any semblance of religious or family values, and the sanctity of life – I ran.

The summer of ‘01 arrived, along with the birth of my daughter, an event that I did not witness. The burden of knowing that I was a father, but was not acting as such, weighed heavily on my mind. Yet still, I took no action.

On September 11th, I drove home from work, having been released early due to the attack and subsequent security concerns. While driving home on the highway, mind numb in trying to process the day’s events, I passed under a bridge. Looking up, there was a man who looked more than a bit ragged, as if he had just awakened to hear the news of the attacks, and walked out of his house. Wearing disheveled clothes and a weary face, he somehow found himself standing on this bridge, arms raised skyward, holding the American flag.

Nearly four hours later, needing to clear my head, I decided to get back in my car and take a drive. My route brought me to that same highway, with that same bridge. Four hours later, the same man was still standing there, holding the flag up as high as he possibly could.

Shortly afterward, I brought my daughter home for the first time. I sat alone with her in a recliner in my apartment, when she began to cry. Her father was truly petrified – nothing was putting this baby at ease. Thinking back to the man on the bridge once more, I knew that I had to do something.

Just then, a frightened man with a wretched voice began to sing. This beautiful baby stopped crying. The song was The Luckiest, by Ben Folds, and it meant the world to this little girl. If the song stopped for even an instant, she would begin to cry again. She needed me to sing that song for her in that moment. She needed me to embrace her, but nowhere near as much as her father needed the same. The ‘culture of life’ had found us both. And on that day, I had become – The Luckiest.

Abortion should not be wielded as a weapon of convenience, something I was almost guilty of doing. And life does indeed begin at conception, not solely for the child, but possibly, as in this case, for the mother and father as well.

Embracing the ‘culture of life’ allows one to understand what it feels like to actually live. To know what it feels like to have a morning begin with a child’s sticky kisses. To realize that the incessant racket of a child’s rattle can be the sweetest sound. To experience that moment of clarity where working overtime on that crucial project no longer makes sense, but watching your child chewing on her favorite crayons does.

With that, we remember the fallen that perished on this day. We remember the servicemen and women who continue to fight for the freedoms that we took for granted 18 years ago. We remember because we must never forget.

We must embrace life.

I now have the opportunity to reflect back on this day together with my eighteen-year-old daughter and realize that I am indeed – The Luckiest.

This column has appeared on Fox News

Courtesy of The Mental Recession

Trump Tweets Video of Crying MN Business Owner Who Lost It All to Looters: “I worked so hard to get here…So hard”
May 30th, 2020 Right Wing Tribune

Baltimore Cop Suspended After Taking Down Woman Who Was Beating Another Police Officer
May 30th, 2020 Big League Politics