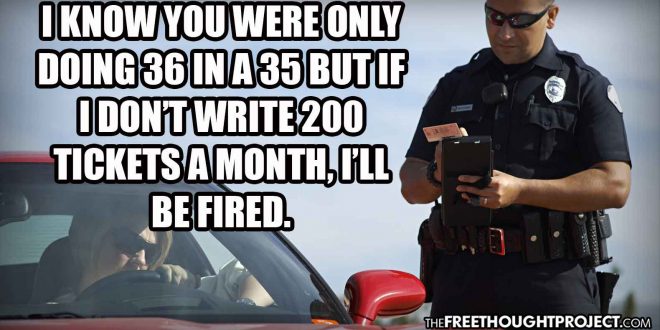 Collegedale, TN — Most people reading this article know what it is like to have the blue and red lights pop up in your rear view mirror. The last thing going through your mind at this point is the feeling of ‘being protected.’ This feeling comes from the fact that the overwhelming majority of the time a driver sees police lights in their mirror is because they have been targeted for revenue collection—often the result of a quota system—and they are about to be given a ticket, or worse.

Police, we are told, are here to keep us safe and protect us from the bad guys. However, public safety all too often takes a back seat to revenue collection. Time and time again, the Free Thought Project has exposed quota schemes in which officers were punished for not writing enough tickets.

The most recent ticket writing scheme to be exposed comes of out Collegedale, Tennessee in which multiple police officers claim they were fired for attempting to call out the illegal orders handed down to them to make arrests and write tickets. Former Collegedale police officers Robert Bedell, Kolby Duckett, and David Schilling have all filed lawsuits against the city and its officials for wrongful termination after speaking out against what they refer to as an “illegal quota system.”

“Due to the allegations of a quota system being implemented by members of police department administration either written or unwritten, stated or implied, I feel it is necessary for a formal investigationto [sic] be conducted,” read a statement from City Commissioner Ethan White in July when Bedell announced his lawsuit. “Today, I have reached out to District Attorney General Neal Pinkston requesting that he immediately request the Tennessee Bureau of Investigation to conduct a full investigation into the Collegedale Police Department’s operating policies.”

Now, just days ago, two more officers, Duckett and Schilling, have come forward with the same allegations as Bedell. All three officers were fired without reason when they claimed to be exposing the illegal quota system.

Janie Parks Varnell, the attorney representing all three cops, argued the firings were “just another example of the City of Collegedale, Chief Brian Hickman and City Manager Ted Rogers terminating skilled officers simply because those officers brought attention to the illegal quota system implemented by the Department.”

She added that “Tennessee law protects public employees who bring attention to the illegal activities of their employers. I will be filing suit against City Manager Ted Rogers, Chief Brian Hickman and the City of Collegedale for the illegal firing of these outstanding officers who were serving and protecting our community by speaking out against unlawful quotas.”

According to Bedell, who was a Collegedale cop from January 2013 to January 2019, in December 2018, the department began directing officers to make a certain number of arrests and citations or face disciplinary actions. Each officer had to complete at least 25 enforcement actions and 100 patrol activities per month, according to the lawsuit.

Bedell’s claim was backed up with photo evidence of a department flyer which had specific categories for officers to check off to show they had made their minimum number of arrests, citations, and patrols.

When Bedell confronted chief Hickman about the quota system, Hickman told him that he could “either resign from the Department or be terminated,” according to the lawsuit. As the Times Free Press points out, Bedell asked if he’d done something wrong, but Hickman told Bedell he “could not discuss it,” and since Tennessee is an at-will state, Hickman could terminate Bedell at any time, the lawsuit states.

Mandating that officers issue citations and make arrests is nothing close to “protecting and serving.” In fact, it’s quite the opposite.

Requiring a minimum number of citations forces conflict and potentially hostile interactions in situations where their would otherwise be no conflict.

It truly forces police officers to create criminals out of innocent people in order to generate revenue, or they face losing their jobs.

Sadly Collegedale, Tenn. is not some isolated incident. For years, TFTP has reported on these quota systems from coast to coast. As we just reported in June, the town of Ridgetop, Tenn. fired its entire police department after they refused to enforce an illegal quota scheme to line the pockets of city officials. If you truly want a glimpse into the mandated revenue collection schemes across the country and the penalties cops face for exposing them, take a look through our archives, here.