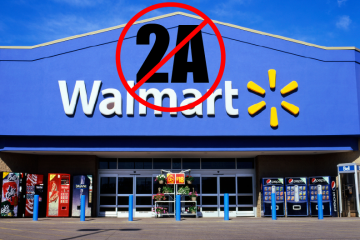 I will keep this short and simple.

I do not care to provide security for your stores anymore.

Now, I’m not saying, I currently WORK as an EMPLOYEE for your companies, what I mean is this…

When your stores allowed open carry, and if something were to happen, I was willing to provide in-the-moment security, with my firearm. To protect your shoppers, your employees, your property and your interests.

I considered it part of the unspoken agreement. You agree to allow me to carry my firearm in the open, and if a situation arises, I will USE my firearm as it is intended to protect life and property. I will NOT provide FREE security for your stupid stores, ANYMORE.

I do not care if gunmen come in your stores and shoot everyone, customers, and employees, and destroy and steal everything. As long as my family and I are not being shot or menaced, I do not care what anyone does in your store, ANYMORE.

I will get my family and myself to a safe observation point and bed in, until it is over. You do not care about my life, and so, I do not care about the lives in your stores, I will focus on my life solely. Everyone for themselves! See, I don’t believe you, when you write in your statements, that you are gun owners. Or, I guess you may OWN a gun, but I doubt you UNDERSTAND your gun. You state that you own guns, as some kind of pacifier… “Look, I own a gun and I think this is a good idea, so you should too!”

What a load of rubbish. If you were a real gun owner, you would have told all the leftist scaredy cats to go pound sand when they complained.

Now you are probably thinking… “Well we didn’t BAN weapons from our store, just open carry, you can still carry concealed”

First off, there are many states where open carry is legal, but concealed carry requires a license, your executives just stripped those customers of their protection.

THERE ARE A COUPLE BIG DIFFERENCES BETWEEN AN OPEN CARRY FIREARM, AND A CONCEALED FIREARM.

Significant differences, which are bullet capacity and barrel length.

My open carry pistol is a “Ferrari”. A finely tuned piece of machinery ‘loaded with accessories’. Wheras, my concealed carry pistol is a Honda Civic, right off the lot, with nothing added. While they both can drive you from point A to point B, they do it very differently.

And that too is where the similarities end with open and concealed pistols. They both shoot projectiles that go from point A to point B. Period. But do it very differently.

Everyone knows pistols come in different lengths. However, the size of a gun typically has nothing to do with aesthetics. It had to do with, holding the barrel and holding ammunition.

The most important part of the firearm is the barrel. It “makes” a firearm. And a firearm cannot be smaller than its barrel.

Barrel length is important for two reasons, and up to a certain point, longer is always better. The barrel length determines the speed of the bullet, and the ballistics. Ballistics actually makes it FOUR reasons, because ballistics is broken down into three categories, internal, external, and terminal.

I expect most laypeople get the basic concept of bullet flight, but it is a much more complex feat than a simple piece of metal arcing through the air from point A to point B.

It’s an energetic equation of how long the bullet is in the barrel, what quality of flight stability that barrel can provide to the bullet (the ability to hit a target accurately) and the force with which the bullet hits the target, expressed as the formula; F=ma, [F]orce is equal to [m]ass (the bullet weight) times [a]cceleration (or deceleration in this case).

These factors are almost solely determined by how long the barrel is. Essentially, the barrel determines if the firearm is going to accomplish its mission.

My EDC (Everyday Carry) pistol, that I open carry on my hip… the Ferrari… is a masterpiece of machinery. I have a lot of time and money in that pistol to make it a superior tool.

Extra long barrel, for longer distance accuracy, a compensator to help keep the gun on target when I fire, and every spring in the gun has been changed to a better, lighter spring.

The professionally tuned trigger is amazing and is indescribably crisp and precise. The capacity is great at 21 rounds. It has a slide mounted red dot optic. The bullet always goes where that red dot is pointing. It is extremely accurate. I can hit whatever I can see with it.

On the other hand, my concealed carry… “Honda”… does not have anything beyond a trigger job done to it. A very short barrel. There are no extended barrels or compensators available to buy. Enhanced springs do not exist for it. No extra capacity magazines are for sale, and it holds less than half of the ammo of my open carry pistol. I cannot put an optic on it, it just has the original ‘open iron sights’. It is no frills. No add-ons.

That is WHY I am not willing to provide security for your stores anymore… because I will be at a major disadvantage now, with what I can use to defend others and myself. I am left with barely enough to protect myself, in close quarters, if the gunman comes after me directly.

You probably think, GOOD! We didn’t want you shooting people in our store anyway. That is fine. Live in your ignorance. The fact is… legal gun owners save over a hundred times more people than criminals kill with a gun each year.

You and everyone that wanted this new policy are gullible sheep that listen to the mainstream media filling your head with nonsense statistics and made up words.

Compare this to 1500 people killed with knives. Have you banned knives in your stores yet?

Compare this number to deaths from the deadly use of hands and feet, almost 700 per year.

The majority of handgun related deaths are NOT occurring in your stores, they occur in large Democrat controlled cities like Chicago — which has the strictest gun control laws in the U.S. — St Louis, Detroit, and Baltimore!

Of the people killed with a gun each year, nearly 90% of those people knew or ‘knew of’ the person that killed them. In other words, they were not random mass shootings, which is the only thing that your new policies address.

Furthermore, as I mentioned, firearms PREVENT CRIMES up to 2 million times a year. Versus the potential of 12,000 homicides. There is a 140 TIMES GREATER likelihood of someone being SAVED with a gun, than DYING from a gun.

A person has a 0.0034% chance of being shot with a gun in your stores. Compared to a 0.7% chance of BEING SAVED by a gun. You dismissed this very important reality.

These are the reasons that I will not consider using my gun to prevent crime in your stores anymore. You ignore reality and my safety, and I will ignore your store, shoppers and employees.

You really should be embarrassed. Pandering to people that don’t even shop in your stores. You are willing to ostracize strong American patriots to appease weak crybabies. You are bending a knee to people that are simply “SCARED TO SEE THE SIGHT OF A FIREARM!”

Your policies will do nothing to prevent crime. You only harm law-abiding citizens with your inane rules.

FACT! CRIMINALS DO NOT FOLLOW RULES, POLICIES, OR LAWS.
THEY ARE CRIMINALS! Here are a “few” more reasons why I oppose this B.S.