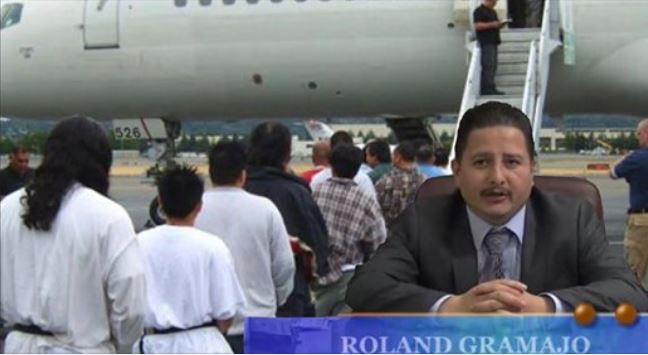 OPINION, Speculation and Analysis– An illegal immigrant and businessman from Houston, who also acts as a pro immigration activist, has been placed in a federal detention center after he extended an invitation to Immigration and Customs Enforcement (ICE) agents to a town hall meeting.

Roland Gramajo is well-known in his community but apparently his immigration status was not. He has been living illegally in the United States for the last 15 years, the Houston Chronicle first reported Friday.

Gramajo’s information sharing session was scheduled in August and sought participation from immigration activists, members of Congress and ICE.

It was reported that ICE representatives had no desire to talk to Gramajo, but placed him in an immigration detention center in Conroe, Texas. Officials  plan to deport him as soon as possible. Gramajo will not be allowed within the United States of America for 20 years after his deportation.

According to the Daily Caller, “Gramajo has already enlisted legal assistance. His lawyer, Raed Gonzalez, suggests his client would still be free if he hadn’t of drawn attention to himself with a town meeting that solicited the advice and direction of ICE officials.”

“This is the problem with the policies of this administration,” Gonzalez told The New York Times. “No discretion. Why are you not targeting traffickers? Drug dealers? It just doesn’t make any sense to get this guy that is working and paying taxes and has a family.”

Whether or not he was a target, ICE received strict orders to deport any and all illegal immigrants across the United States, which  could mean the removal of around 1 million people.

If I were to answer his question as to why he was arrested, I would tell him it is because we are a nation of laws, in which you broke the rules, and that is unfair to all those people who chose to follow them.  You skipped the line, what would you say to those waiting patiently, going through the legal process whom to circumvented?

Gramajo was the head of the Guatemalan Organizational Center, a group that advocates for the rights of asylum seekers. He has also been commended by the Houston city council for his work on community events.

ICE officials told the Chronicle that none of its agents attended Gramajo’s town hall in a professional capacity.

Gramajo’s wife, Espinosa, relayed at a Friday news conference that her husband had recently been told by an unidentified caller that his illegal status was known and would be reported to ICE.

“We believe in this case, particularly, Gramajo’s wife stated, claiming that he had been “targeted by immigration and he was being followed,” she told reporters during the news conference, reported the Chronicle.

“He’s not a risk to anybody,” Gonzalez said to the Chronicle. “This guy only has a very minor offense from when he was a kid. Exceptions have to be made, especially when so many U.S. citizens are involved. We’re talking about five kids.”

This is a great example illustrating, in my opinion, how the immigration laws in this nation must be fixed.  My opinion, which may not be shared by all of our readers, is that immigrating into the US should be an easier process for those people who are not criminals or seeking to receive transfer payments from the government.  If one can stand on their own two feet and want to work towards their own American Dream, I believe we should welcome them with open arms, as long as they follow the proper rules and procedures. I also believe that those who seek to circumvent the rules and essentially spit in the faces of all those obeying the law, should not be given an advantage and should not be welcomed.

While I sympathize with the fact that the man has lived in this nation for 15 years appears to be an upstanding member of the community, just because you were not discovered until now does not make your failure to follow the rules disappear.

The point is that the system is broken and until it is fixed this crisis will continue.  What do you think is the solution to the immigration crisis? Let us know on Spreely.com, the social network for free people.